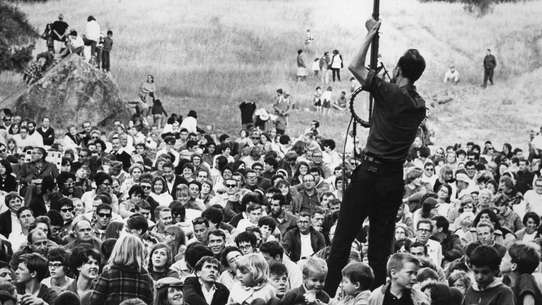 The BEST episodes of American Masters

To honor America's most notable creative artists and the inspiration behind their work. Special broadcasts profiles a cross-section of the nation's finest artistic pioneers from the past and present.

#1 - Alice Waters and her Delicious Revolution

Follow Alice Waters (b. April 28, 1944) through a year of seasonal shopping and cooking, and discover both the recipes and vision of an artist and an advocate. She and her now-famous restaurant Chez Panisse became a major force behind the way Americans eat and think about food, launching the explosion of local farmers' markets and redesigned supermarket produce departments. Distressed by the food she saw in public schools, Waters started an organic garden with an integrated curriculum at the Martin Luther King Middle School near her house, an idea inspired by The Garden Project at the San Francisco county jail. The idea of an Edible Schoolyard has now spread across the US - and inspired similar programs worldwide. She is an activist with a flawless palette who has taken her gift for food and turned it into consciousness about the environment and nutrition, and a device for social change.

Sam Cooke put the spirit of the black church into popular music, creating a new American sound and setting into motion a chain of events that forever altered the course of popular music and race relations in America.

Writer and activist Alice Walker (b. Feb. 9, 1944) made history as the first African-American woman to win the Pulitzer Prize for Fiction for her seminal novel The Color Purple (1982), for which she won the National Book Award. American Masters presents Alice Walker: Beauty in Truth, premiering nationally Friday, February 7 at 9 p.m. on PBS in honor of Walker’s 70th birthday and Black History Month. Filmmaker Pratibha Parmar’s new documentary tells Walker’s dramatic life story with poetry and lyricism, and features new interviews with Walker, Steven Spielberg, Danny Glover, Quincy Jones, Gloria Steinem, Sapphire and the late Howard Zinn in one of his final interviews. American Masters — Alice Walker: Beauty in Truth charts Walker’s inspiring journey from her birth into a family of sharecroppers in Eatonton, Georgia, to the present. The film explores Walker’s relationship with her mother, poverty, and participation in the Civil Rights Movement, which were the formative influences on her consciousness and became the inherent themes in her writing. Living through the violent racism and seismic social changes of mid-20th century America, Walker overcame adversity to achieve international recognition as one of the most influential — and controversial — writers of the 20th century.

A detailed examination of the celebrated vocalist's career, from her amazing successes to her self-doubts and personal problems.

For much of the 20th century, Sandburg was synonymous with the American experience, a spokesman on behalf of the people. One of the most successful writers in the English language, Sandburg was a three-time Pulitzer Prize-winner for his poetry as well as part of his six-volume Lincoln biography. Yet, after his death, Sandburg’s literary legacy faded and his poems, once taught in schools across America, were dismissed under the weight of massive critical attack.

A film that traces the life and accomplishments of America's unique and recognized comedian/writer/filmmaker.

Iconic writer, director, actor, comedian, and musician Woody Allen allowed his life and creative process to be documented on-camera for the first time. With this unprecedented access, Emmy®-winning, Oscar®-nominated filmmaker Robert Weide followed the notoriously private film legend over a year and a half to create the ultimate film biography.

#9 - Rod Serling: Submitted for Your Approval

A documentary on the man who pioneered the use of early television for dramatic storytelling.

Discover the man behind the legend. With full access to the Miles Davis Estate, the film features never-before-seen footage, including studio outtakes from his recording sessions, rare photos and new interviews. American Masters Presents Stanley Nelson’s Grammy-nominated Miles Davis: Birth of the Cool

Composer, conductor, genius, mensch: Marvin Hamlisch (June 2, 1944 – Aug. 6, 2012) earned four Grammys, four Emmys, three Oscars, three Golden Globes, a Tony Award and a Pulitzer Prize before his untimely death, making him one of only two PEGOT winners ever. Hit after hit — “The Way We Were,” “Nobody Does It Better” and scores for The Sting, Sophie’s Choice and the Broadway juggernaut A Chorus Line — made him the go-to composer and performer for film, Broadway, every U.S. President since Reagan and concert halls worldwide. With exclusive access to Hamlisch’s personal archival treasure trove and complete cooperation from his family, Dramatic Forces and THIRTEEN’s American Masters explore his prolific life and career in the series’ Season 27 finale, Marvin Hamlisch: What He Did For Love, premiering nationally Friday, December 27, 2013, 9 -10:30 p.m. ET on PBS

#12 - Carol Burnett: A Woman of Character

The career of funny woman Carol Burnett, from Broadway to television stardom.

For over 70 years, Rita Moreno has inspired audiences with her performances, the film follows her journey from her childhood to stardom.

One of the biggest American bestsellers of all time, To Kill a Mockingbird (1960) was thought to be the first and only novel by Harper Lee. However, on July 14, 2015, Go Set a Watchman was released, featuring characters from Lee's Pulitzer Prize-winning novel. Newly updated version of Mary McDonagh Murphy’s 2012 documentary, Harper Lee: Hey, Boo.

A trove of never-before-seen archival footage provides an unconventional look at the fiercely independent style of filmmaking that emerged out of Austin, Texas in the late 1980s and 1990s with Linklater as its poster boy.

Explore the inner life and works of the activist, playwright and author of “A Raisin in the Sun,” Lorraine Hansberry. Narrated by actress LaTanya Richardson Jackson and featuring the voice of Tony Award-winning actress Anika Noni Rose as Hansberry.

From award-winning director Ben DeJesus (Great Performances: John Leguizamo’s Road to Broadway, John Leguizamo: Tales from a Ghetto Klown), Raúl Juliá: The World’s a Stage is a warm and revealing portrait of the charismatic, groundbreaking actor’s journey from his native Puerto Rico to the creative hotbed of 1960s New York City, to prominence on Broadway and in Hollywood. Filled with passion, determination and joy, Juliá’s brilliant and daring career was tragically cut short by his untimely death 25 years ago, at age 54.

Margaret Mitchell: American Rebel engages leading historians, biographers and personal friends to reveal a complex woman who experienced profound identity shifts during her life and struggled with the two great issues of her day: the changing role of women and the liberation of African Americans.

A journey through the poetry and music of Bob Dylan.

#23 - Sweet Honey in the Rock: Raise Your Voice

A profile of the musical group of African-American women who uniquely blend many cultural and historical themes in their work.

#24 - Hitchcock, Selznick and the End of Hollywood

A chronicle of the clash between two film-making legends when they tried to work together in the 1940s.

A biography of the acclaimed sculptor known for his mobiles and large public art pieces.