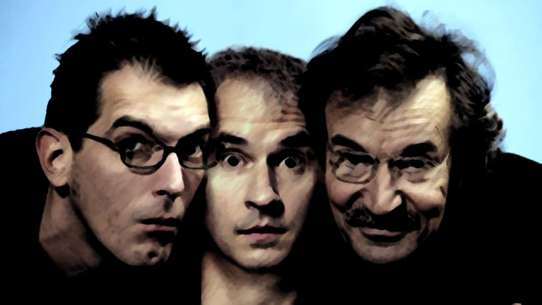 was a legendary comic television show on the Flemish television (Canvas). The design was remarkable media events, slips, ... Indeed, the title was also the starting point. There are 2 seasons made, which have been repeated several times.

- Flemish journal - House journalism - Visualized xenotermonological conversation - Ordinary people in interviews and in the news - Audience Question: "Why is there a higher birth rate in Limburg and Antwerp?" - Smart brother, stupid brother and the bank robbery - The seats of the chairs are not colorfast - Nature Documentaries - Pedophiles search older victims - Which is better for use? - Martine Thang Dirk Sterckx + = ...

- Presentation of persons and the panelists - Hypothetical conversation - People like you and me - Olivier de Winter - Studio Guest can not come - Oldest woman dies - Audience question: "New verb + meanings" - Audience question: "Are there still innovations at "De Post" besides adhesive stamp?" - New proverbs - Eyewitness - Spokesperson at press conference - People's Journal - Viewers question ' riots of the month " - Transitions between news - Sinterklaas is a man like you and me

- The polite insult show - No success for Wim Verstraeten - Body Imagery - Jean-Claude Van Espen has problems with his stool - Lessons for Luc Vandenbrande - Audience Question: "Arguments for women in the auto salon?" - Fred's world champion in the Australian ... - The syndrome of Kwak and Boemel - SP-members must be on tv from Tobback - Ter Zake is fantastic

- Youth Language - Valentine of the year - Audience Question: "Are there no better alternatives for the missing suitcase?" - Creative with emphases - Piano as a means for laughter - Flemish people lie during surveys - Breakfast news at kindergarten level - Gemini - Who presents Ter Zake tonight

- Creative with neologisms - There is a lot of mistakes on the map of Belgium, Mark improves - More laughter on Alles kan beter - The problem of cash couriers - Music Video clips of past - Viewers Question: "Is it possible to cook more than 100kg of mussels in a pot?" - Artist names for politicians - Part of the car is no longer necessary - Test drive the car - Elvis lives! - Subjects based on a song - Exit at HT & D style

- The ... and happen to ... Add & piece - Difficult legal terms - Audience Question: "Interest for other community?" - Many orgasms make you live longer - Expression of feelings about words in the news - Expressions of reporters about the images - Audience Question: "Is there anything to change the pope?" - Presentation of the weather - I like you ... - New Year Message

- Wheel Of Fortune - Reconstruct the lyrics of Petra - South Africa - Minimum of acting talent for weighty spectacles - Audience question: "what must the state police do to be more favourable?" - Order of Bavo Claes - News based on comics - Nobel Prize - Whispering tips - Flemish people are multilingual - Anonymous witness

- Brussels - New York - Baghdad - Washington - If you're angry, use sounds - Persons in the background - 'De Vettige Swa' - Viewers Question: "What is the connection between ...?" - The remote is a powerful weapon - Can AIDS be eliminated - More and more information to reporters - Speak louder for the old people

- Home language - Use of hands - Journalists are intellectueler than politicians - Responding on TV - Talkprogram by Rob Vanoudenhoven - Friday the 13th - Viewers question "How is it possible that a 2 km long underground without a driver can drive?" - Public question "Can you think of improper advertising slogans?" - Container at home to Regina