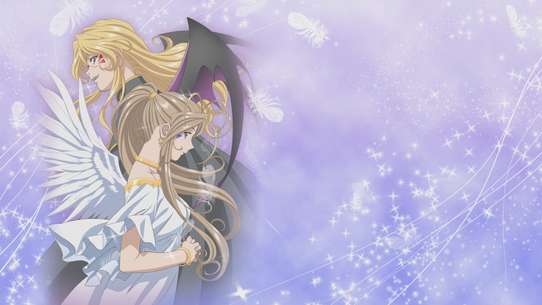 The BEST episodes of Ah! My Goddess

Nice Guy Keiichi is doing his best as a poor student at a tech college, but his good nature is taken advantage of relentlessly. One day he is attempting to order a pizza over the phone (being stuck at the dorm to take messages for upperclassmen) and by fate reaches the Goddess Help Line. Before he knows it he is presented with a real live goddess named Belldandy who will grant him one and only one wish. Still suspecting he is the butt of an elaborate joke, he wishes for her to be by his side forever. His wish is granted! It would seem his luck has changed, but he finds out that having a goddess is no way to avoid trouble.

Belldandy rides a bicycle around and inspires Skuld to try to learn for the first time. But it proves to be difficult for the expert mechanic. Skuld is about to give up, when she meets a boy around her age, who offers to help her ride.

The demon queen Hild decides to take matters into her own hands as she traps Keiichi in a romantic situation with herself, and Keiichi is totally going along with the relationship. The goddesses investigate how Hild is able to control Keiichi without hypnosis or drugs, and take action when Hild does some uncovering of her own. Belldandy must make a tough choice of controlling her jealousy and love.

Keiichi, the goddesses, and the motor club gang visit a family friend's house, and meet a woman named Chieko Honda, but she is a contemporary of Keiichi's grandfather, and had passed away. Could she be a ghost? The goddesses apparently think so, and Keiichi must figure out the reason she's still around and the loose ends she's trying to have resolved.

Peorth continues to hang out at the temple, meddling more and more in Keiichi's life. She belittles Belldandy's ability to fulfill Keiichi's wish, and angers the other goddesses to the point where they issue a contest to fulfill Keiichi's wishes, however simple or unintentionally perverted they might be. Then Peorth attempts to make her own version of the Love Potion by using one of Urd's ingredients, but that could result in some big time trouble for Keiichi.

Marller and Hild have an old lamp that they can use to trap people by projecting something they desire most and getting them to kiss the lamp.

It's the final showdown where the goddesses, Belldandy and Skuld, battle against the Lord of Terror, who has now possessed Midgard! With the whole world at stake, what can Keiichi do to help? Perhaps another attempt at the flute will do the trick, and that almost works, except now the Lord of Terror has possessed Keiichi!Could this be the end of the world? Will Belldandy be able to save her love?

#7 - Ah! I Offer You This Feeling on Christmas Eve

Keiichi looks for a gift in response to Belldandy's in the previous episode, and Urd convinces him into getting a ring, but that ring he's interested in is out of his price range, which means having to work extra hard and doing extra jobs to save up for it. With only a few days left until Christmas, will Keiichi be able to save up enough and yet keep his moonlighting a secret from Belldandy?

The Christmas season is just getting started, and Sayoko is anything but merry. She's complaining of an "empty" feeling that consumes her. Unable to think of any other reason for her feeling, she blames Keiichi for it since he is the only man at the university who does not vie for her attention. She concludes that in order to fill the void in her heart, she must win Keiichi's affection. Meanwhile, Urd hints to Belldandy that humans are easily affected by the cold weather and that Keiichi runs the risk of becoming ill. Belldandy knits all of her emotions and memories into a very special sweater for Keiichi. After Keiichi finds Sayoko drunk on the side of the road, Belldandy is accidentally sent on a search to find Keiichi's sweater, Keiichi on a date with Sayoko, and Sayoko is forced to learn a lesson about feelings.

Urd deals with her split personality, and ponders the eventuality of becoming a pure goddess. In order to become normal again, Urd resorts to calling the demon queen Hild, who also happens to be Urd's mother!

Urd makes a love candy for Keiichi, but Skuld suspects something and slips in some additional ingredients. Belldandy consumes it, and she becomes very romantically bold in all her actions and with Keiichi too!

More goddess-related system problems arise because of Belldandy's unstable heart. A new girl shows up at the temple, and it's Belldandy's kid sister Skuld! She's there to deal with the outbreak of bugs but also has an ulterior motive, to bring Belldandy back to heaven. To complicate things, Skuld's bug blasting invention isn't working and is doing all sorts of weird things. Can Keiichi and Skuld repair the machine in time or will Belldandy have to return to heaven?

Belldandy must spend a week without using her magical powers. Keiichi and the gang then get dumped on literally as all their friends and decide to store their things at the temple. Skuld creates a device that enlarges the storage room but when Keiichi and Belldandy use it, something goes wrong and they end up lost in a seemingly infinite space!

Urd receives a visit from a guy from her past. Could it be a former boyfriend?

Keiichi accidentally makes another call to the Goddess help line, and summons the goddess Peorth, who makes her debut in this episode. But since Keiichi already got what he wished for with Belldandy, he doesn't ask for anything else, but Peorth is intent on having Keiichi wish for something significant, and will stay there until he does.

Belldandy returns home with her reissued license. With it, she tries a spell but something goes wrong; her license is for demonic powers! As her sisters go to heaven to get it fixed, Belldandy spends time with Keiichi, but with the Ultimate Force working for evil, just about everything goes wrong. Whenever Belldandy tries to fix things, it has an ill effect on Keiichi. According to Marller, Belldandy will have to resort to being a demon to save him!

Keiichi receives his first love letter from a cute second-year student named Shiho. The girl is more than happy to see him; in fact, she senses evil spirits around Keiichi, and attempts to exorcise them! Shiho even visits their home to perform a large-scale cleansing. Belldandy remains strangely silent as she attempts to deal with her feelings of a different girl giving Keiichi some attention.

This episode introduces Chihiro Fujimi, the senpai of Ohtaki and Tamiya, and the founder of their Motor Club. Chihiro is inspired when she sees Keiichi's mini-bike, and suggests they have a race together. With the preparation and the actual race, Belldandy and Keiichi get a good glimpse of Chihiro's character and motives.

Damage to Yggdrasil from the incident with the Lord of Terror causes Keiichi's wish to be lost. Without a contract binding her to Earth, Belldandy is notified that she will have to return to Heaven unless Keiichi's wish can be restored. Belldandy's time on Earth is limited. Keiichi states that he wants to treasure the time he spends with Belldandy, and musters enough courage to invite her on a date.

The Yggdrasil system is in chaos from all the attacks from the Lord of Terror. Urd starts releasing the Ultimate Destruction Program which will not only destroy the current world but allow the demons to rule it. Belldandy decides to release her sealed power and confront Urd. God gives Skuld a Midgard Flute as a last-chance vaccine to stop the Lord of Terror. Will those efforts be enough?

Belldandy wins the Miss NIT contest and becomes Campus Queen. Sayoko and Toshiyuki try to uncover Belldandy's identity by setting up revealing situations where Belldandy would have to use her magic, but with big sister Urd watching, that isn't so easily done. Toshiyuki manages to put Urd to sleep by playing Enka music, and Sayoko kidnaps Keiichi. To get Keiichi back, Belldandy might have to reveal to Sayoko the truth about herself!

Realizing that he can't be stringing around Peorth and suspecting that Belldandy could be growing jealous again, Keiichi decides to tell Peorth his wish, but it turns out to be a fairly strong one: I want you to fulfill my desire. How will Keiichi be able to see that through and still be faithful to Belldandy?

#22 - Ah! Taking an Examination of Love, Starting with a Deviation Value of 30

Keiichi gets a video from a store, but when he plays it, a mysterious woman shows on the screen. The woman is Urd, who is Belldandy's older sister. Urd tries to move Keiichi's romantic intentions forward by slipping him a controlling love potion.

After confusing Keiichi and the goddesses, Devil Urd is confronted by the real Urd, and they battle it out. But just when Devil Urd has the upper hand, her weakness reaches her and she escapes. Urd plans to get rid of her by exploiting her weakness, but Belldandy realizes that in order to do that Urd would have to sacrifice herself. Skuld and the others try to come up with a way to save Urd.

#24 - Ah! The Wavelength That Captivates Love!

During a fundraising campaign for the motor club where they attempt to fix vehicles, Keiichi's Senpai, Ohtaki, helps out a young woman, Satoko, with her motor scooter, and ends up being attracted to her. Keiichi and Belldandy help Ohtaki ask Satoko out on a date. Toshiyuki Aoshima is not pleased about the date, after all Satoko is the University Director's daughter. He attempts to foil the date and a meeting with Satoko's father, but Ohtaki may have a bit of luck on his side thanks to Belldandy.

During their visit to the hot springs, Keiichi and the goddesses encounter Marller, who ends up socially drinking with Urd. But Marller manages to snatch a strand of Urd's hair, and uses it to make a clone to extract the demon side of Urd.