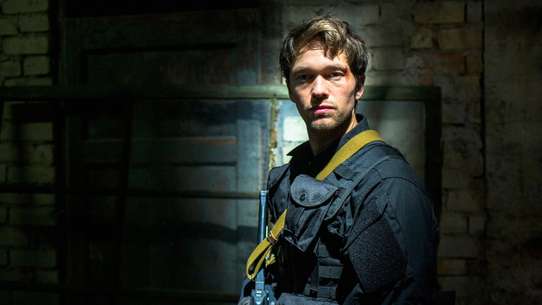 The BEST episodes of Agent Hamilton

Former Swedish intelligence officer Carl Hamilton, trained by U.S. Navy Seals to become part of an illegal black-ops cell within the Swedish military, is caught up in a murder investigation seemingly linked to public cyberattacks and soon finds himself in a life-threatening mission against a corporate private security firm.

Hamilton tracks down Sonja to tell her the truth. Their meeting is cut short however when the police brings her in for questioning. Birger helps Hamilton dig up evidence of Haig lying about his mission. He sets a meeting with her, which turns out to be a trap. Hamilton overthrows Haig’s henchmen, but she is able to escape. After their encounter, she leaks false information about Hamilton playing a guilty part in the terrorist attacks, resulting in him becoming wanted by the police.

Kristin begins interrogating the arrested Hamilton. She discovers that he worked for Haig and that somebody has framed him. Kristin’s relationship with her husband Rikard reaches it’s breaking point. DG quits his job when SÄPO empty OP-5’s offices. He advices Astrid to do the same. SÄPO arranges a press-conference to let the public know about Hamilton’s involvement in the terrorist attacks. Haig orders Hamilton’s assassination. Kristin’s investigation leads her to Astrid.

Hamilton changes his mind at the last second, saves Kristin from the burning warehouse and brings her to a hospital. When Haig discovers this, she orders Hamilton to kill Kristin. He refuses and breaks contact with Haig. After both of them return home, Kristin’s husband Rikard finds out that she has been unfaithful to him and she is forced to spend the night at Birger’s house. Hamilton, wanting to get away from everything, travels together with Sonja to her summer cabin.

In order to find the intel which Borisov passed on to Norling before his death, Hamilton travels to Ukraine, unknowing that Haig has hired assassins for the same goal. Haig turns out to be working for Pence, who convinces Gripenberg into buying his cybersecurity-system after the latest cyberattacks. After a visit from SÄPO, DG decides to return into the battlefield. Hamilton succeeds in finding Norling’s USB-drive which had been hidden by Mike.

Hamilton and Kristin arrive in Hamburg to help BND in the hunt for the terrorists. Astrid investigates Elena’s death. DG finds out that Hamilton is a double agent working for the CIA. American security-specialist Pence convinces Swedish State Secretary Gripenberg to pay off the cyber-terrorists responsible for the hospital outage, preventing them from carrying out further attacks. Unfortunately, they are unable to prevent Norling’s death. Hamilton tracks the terrorists to a warehouse in central Hamburg. C

Hamilton starts working at SÄPO to Kristin’s great surprise and dismay. He immediately befriends Birger who helps him find out that Norling hid an USB-hard drive with secret information in a storage facility. Elena, hidden in a safehouse in Stockholm, manages to sneak away from Astrid’s supervision and meets Norling who directs her to the same storage facility, without noticing she is being followed by Mike, the assassin.

When Carl Hamilton returns home from a secret CIA-program in the United States, Stockholm is hit by a series of bombings and cyber-attacks. Hamilton kills the suspected terrorist Rashida after a violent encounter but is unable to stop the attacks. Home Secretary Lindgren, whose secretary Norling is injured in the attacks, demands to find those responsible. SÄPO (Swedish Security Service)-agents Kristin and Birger initiate a hunt for the terrorists, which soon forces them to go beyond the confines of their job description.

Hamilton returns to Sweden, starting off his homecoming with meeting Sonja. Kristin and Birger make progress in the hunt for the terrorists and discover that they are hiding on a ship headed for Germany. Hamilton sets up a secret meeting with his CIA-boss, Haig. DG and his colleague Astrid begin to investigate how the murder of Elena’s boyfriend Borisov is connected to the terrorist attacks. DG gives Hamilton a mission to infiltrate Borisov’s office at the Russian embassy.

Hamilton travels to Palestine on a mission for OP-5 in order to find out more information about the terrorists and their agenda. The meeting with PLO escalates quickly after they discover that Hamilton killed Rashida. It turns out that she was a PLO-agent, on a secret mission to stop the terrorists in Stockholm, not help them. A violent chase ensues, and Hamilton is forced to escape. Kristin and Birger’s investigation surrounding the terrorist attacks leads them to suspect that Hamilton was involved.