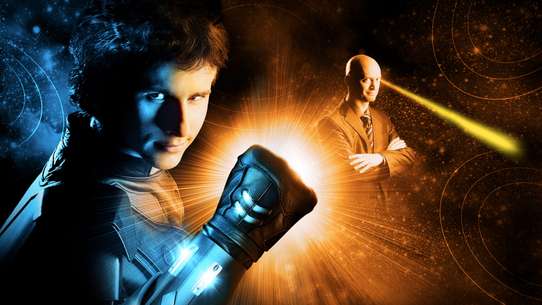 The BEST episodes of Aaron Stone

Every episode of Aaron Stone ever, ranked from best to worst by thousands of votes from fans of the show. The best episodes of Aaron Stone!

Aaron is detained for questioning when he seemingly kidnaps T. Abner Hall and must convince S.T.A.N. and Dark Tamara that it wasn't him, but the shape-shifting mutant U.

Charlie is forced to ditch his date with cheerleader Irina Webber when a new and improved Mr. Galapagos returns to steal the Forced Fusion battery. Meanwhile, Jason invites a bunch of girls from school to go on a joy ride in Charlie's new car.

A new threat arises when the evil hooded villain, Damaged, frees himself and a bus full of failed experiments, criminals and mutants. Once free, Damaged begins picking off the remaining Omega Defiance members looking for the last vial of intelligence serum. Dr. Necros comes looking to Aaron Stone for protection, but instead lures him into Damaged’s clutches. Meanwhile, Jason is determined to get Charlie a dream job working at the video game and comic store.

Charlie battles father and son villains with the power to stop time. Meanwhile, his poor school grades and academic probation threaten his ability to play basketball.

Aaron Stone has to stop Cerebella, whose video is hypnotizing millions of kids.

The truth behind Hero Rising is revealed to Charlie and he goes on his first mission to save the world. He has to prevent Souljacker from releasing a lethal toxin.

Damaged hires a high-tech bounty hunter named Trace to hunt down Aaron Stone. Meanwhile, Charlie manages to catch the eye of the track coach by using his special shoes, the X5's in the long jump, much to Emma's chagrin since he is only supposed to use those shoes on Aaron Stone missions.

Aaron and Dark Tamara have to go undercover at a private school to find out what's going on with some students and to see if Damaged is involved.

When Charlie (Aaron Stone) discovers that his father worked for the Omega Defiance, the news sends him into a tailspin as he tries to prove that his father wasn’t evil. Charlie follows clues left by his father to track down an intelligence serum, which leads Aaron to a rematch with Damaged over the vial. With new threats to the world, T. Abner Hall enlists Vas and Ram to create a "Hero Rising" expansion pack incorporating the new villains to help Charlie train for his inevitable confrontation with this new evil. Meanwhile, Jason pretends to be Charlie as he begins working at the video game and comic store.

Aaron is photographed while stopping an armored car heist, forcing him to let Mr. Galapagos escape when more cameras are present. Meanwhile, Jason, and a classmate who has a crush on him begin to question just who and what S.T.A.N. really is.

Helix's newest half-human mutant stows away on the SSJ in an attempt to destroy Aaron Stone, and now it's up to S.T.A.N. and Emma to keep Charlie safe until he can learn how to defeat the mutant on "Hero Rising." Meanwhile, Jason becomes jealous of Charlie's accomplishments and tries to make a name for himself.

A bad guy called 'Powers' abducted Emma, so Aaron has to find her and get her back. For his bad Powers has a satellite system built to chase and destroy Aaron Stone.

Charlie develops a crush on Tatianna Caine, a girl he rescues while trying to recover stolen radioactive material. After Tatianna reveals a secret about herself, S.T.A.N. must rescue Aaron. Meanwhile, Emma enlists Jason to help run her campaign for class president.

When Jason accidentally sells the Gauntlet, Aaron must confront Shackles without his trusty weapon. Meanwhile, a criminal uses the Gauntlet to rob a bank.

A cyborg with a human mercenary's brain is sent by General Cross to destroy a nuclear wast plant in North Korea. Charlie defeats the cyborg and sends it to Mr. Hall but to his dismay the super-human soldier isn't completely destroyed.