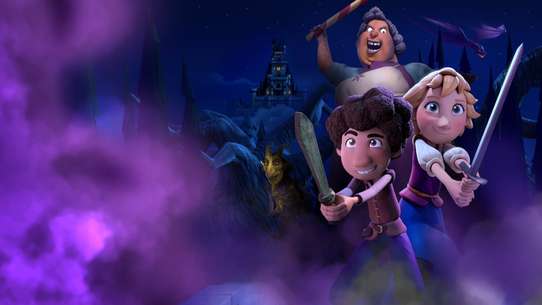 The BEST episodes of A Tale Dark & Grimm

Based on the best-selling book series by Adam Gidwitz, the animated series follows Hansel and Gretel as they run away from home to find better parents...or at least ones who won’t chop off their heads! As Hansel and Gretel leave their own story and venture through other classic Grimm fairy tales, unexpected narrators’ guide us through their encounters with witches, warlocks, dragons and even the devil himself. As the siblings roam a forest brimming with menacing foes, they learn the true story behind the famous tales, as well as how to take charge of their destinies and create their own happily ever after. Because once upon a time, fairy tales were awesome.

The once-mysterious Johannes tells the children an illuminating tale about a blue room, a cursed painting, a golden princess and a royal wedding.

#2 - Chapter the First: Hansel and Gretel

In the kingdom of Grimm, a frightened Hansel and Gretel run away from their parents - and into the arms of a baker with a taste for children.

#3 - Chapter the Eighth: The Broken Kingdom

Hansel and Gretel return home armed with questions. But when they don't like their parents' answers, they decide to take matters into their own hands.

Gretel makes a plan to find her brother - but first, she must expose an evil warlock. To end his imprisonment, Hansel must outwit the devil himself.

#5 - Chapter the Second: The Seven Swallows

The siblings seek safety with a turnip farmer and his wife... but something seems off. Perhaps it's the bedroom with seven empty beds?

#6 - Chapter the Ninth: The Dragon

A determined Hansel and Gretel gather a small army of allies to take down the dragon that's been darkening the skies.

#7 - Chapter the Fourth: The Monster Within

Gretel finds herself sad and alone till a friendly fishmonger comes to her rescue. Elsewhere, a rejuvenated Hansel is making a fresh start - as a lord.

#8 - Chapter the Tenth: The Royal Family

The shaken siblings make a shocking discovery in the wake of battle. Now, to protect their kingdom, they must do something they never thought possible.

#9 - Chapter the Fifth: A Smile As Red As Blood

Hansel's fate takes a devilish turn when Lord Meister loses a bet. Gretel's shocked to learn that a handsome young man isn't what he seems.

#10 - Chapter the Third: Brother and Sister

Giving up on their search for the perfect parents, Hansel and Gretel make a new home in a harmonious wood, where Hansel develops a beastly appetite.