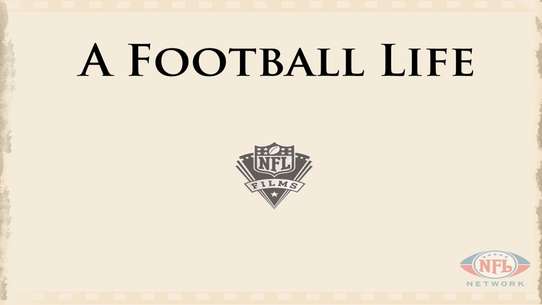 The BEST episodes of A Football Life

A Football Life is a documentary series developed by NFL Films and aired on NFL Network that documents the lives of select National Football League players, coaches, owners, and teams. Friends, teammates, family members and other players and coaches associated with the subjects are interviewed.

The heart and soul of the legendary 1985 Chicago Bears defense, Mike Singletary shares a life full of lessons learned from the game.

You don't know football unless you know Paul Brown, the man responsible for inventing the modern game as we know it.

One of the most impressive careers in pro football history was just the beginning for the great Alan Page.

One of football’s greatest safeties and one of its most controversial players remains a vital and passionate voice of the game.

A Football Life takes an in-depth look at the life of NFL running back great, Walter Payton, using unique on and off-the-field sights, sounds and stories.

The extraordinary story of the lifelong assistant turned overnight success who has led the Arizona Cardinals back into contention.

Bill Walsh was knows as a genius but was also an insecure, tortured artist. After revolutionizing the NFL with the ``Team of the 80s,'' he wrote a book that has become the bible for generations of football coaches.

Before the Seahawks ever reached the Super Bowl, the greatest player in team history paved the way in Seattle.

The inspiring story of Curtis Martin, who rose from the streets of Pittsburgh to become a Hall of Fame running back.

Hall of Fame Head Coach Joe Gibbs tries to balance his personal and professional life while building the NFL’s most diverse dynasty.

The inspiring story of Brandon Marshall, who has become the national face of borderline personality disorder and one of the NFL's best wide receivers.

A Football Life takes an in-depth look at the life of NFL coach ,Mike Ditka, using unique on and off-the-field sights, sounds and stories.

An intimate look at the mercurial wide receiver as he recovers from a career-threatening injury and reflects on a spectacular career.

He was known as Weapon X on the field, but he was a gentle family man off it. A Football Life: Brian Dawkins looks at the two sides of Dawkins, from the beginnings of his superstar career, through his battles with depression, all the way to the Hall of Fame.

A revealing look at the legendary yet largely unknown head coach who built the Steelers dynasty of the '70s.

The football life of perhaps the greatest player in NFL history and his impact both on and off the field.

A Football Life examines Barry Sanders' incredible Hall of Fame career, his unexpected retirement and the reaction it garnered throughout both the NFL and the city of Detroit, and his relationship with his late father, William.

The inspiring story of former linebacker Chris Spielman and the strength of his family.

Part 2 of the extraordinary life of Joe Namath, from the high of the Super Bowl III to the lows of a life lived too hard, and back to the place he was born in Western PA.

The rise, fall, and redemption of one of the most dominant and beloved players in Washington history, the Secretary of Defense who was functionally illiterate and became addicted to drugs.

One of most exciting and dynamic players in NFL history, Marshall Faulk rose from the streets of New Orleans to launch the Greatest Show on Turf.

Undersized and unwanted, Wes Welker overcomes obstacles to re-define the role of the slot receiver in the NFL.