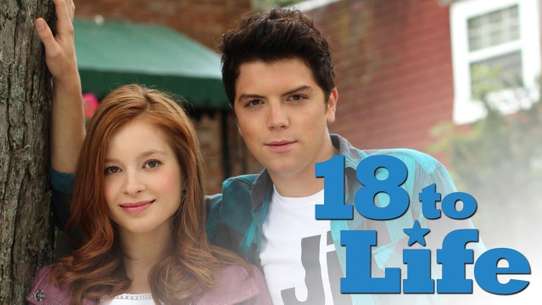 The BEST episodes of 18 To Life

Every episode of 18 To Life ever, ranked from best to worst by thousands of votes from fans of the show. The best episodes of 18 To Life!

'18 To Life' is about a couple that does the unthinkable in the name of love: they run off and get married at the tender age of 18. Their parents-next-door neighbors and polar opposites-are less than thrilled and even their peers disapprove. As Tom and Jessie struggle to become man and wife in a world that still views them as kids, the tension between their families adds a dose of biting humor to their sweet love story.

When Tara gives the Bellows a really awful painting she's made, Ben takes extreme measures to get rid of it. Tom and Jessie misplace a very embarrassing video they made.

Tom discovers that parental endorsement does nothing for his sex life.

A secret from Ben's past threatens to ignite over a family dinner with a rabbi.

Tom tries to spice up his cooking skills. Tara develops a nack for flirting and starts attending to a new guy, Jeff. Ben learns when and when not to use the phrase "my bad".

Tom and Jessie announce their engagement, throwing their families into chaos.

Tom discovers a positive pregnancy stick and suddenly everyone is pregnant. Wendy builds a family memory box for her school project.

Tom's manhood is tested when Jessie tries to teach him to drive.

Tom and Jessie's attempt to find a place of their own backfires disastrously.

Phil pulls a Tom and asks Tara to marry him as a joke. But Tara gets serious and accepts his proposal. Tom divulges one of Carter's secrets which causes a major riff between the two.

Jessie and Tom enter the dangerous waters of the joint bank account; Judith tries to hone in on Tara's exercise regime.

Tom and Jessie take inventory of their past sexual partners. Phil's vacation plans hit a snag when Tara's past catches up with her passport.

When Tom's cruel Grandmother discovers he's married, she croaks on the spot, leaving a guilt wracked Tom to invent nice things to say at her Eulogy. Phil builds a gate in the fence dividing their properties so that the Bellows can visit their Grandma's shrine.

A row over toilet seat etiquette escalates into an all-out war of the sexes. Judith wants to re-enter the workforce. Phil disguises a turkey fryer as a coffee urn.

When Tom ropes Carter into helping his father with taxes, Carter blossoms into the 'son Ben always wanted'. A heart-broken Ava crashes out at the loft, Jessie and Tom can't get seem to rid of her.

Nature is never the same when the families roll onto the campground in an immense R/V. Tom & Jessie escape from their parents only to get lost in the woods.

Jessie makes an ill-fated stab at winning Judith over at her belated bridal shower; while Tom gets roped into letting the dads crash his bachelor party.

Judith and Jessie compete to look after Tom when he gets a cold; Ben is horrified to learn Phil is in Mensa; Tara deals with an irate mailman.

When Wendy does a documentary on why marriages work or fail, the couples do interviews that forces them to rethink their relationships. Meanwhile, Tom just wants to fix a stubborn ceiling leak in the attic.

Tom and Jessie finds jobs at the same book store, but Jessie is hired for the managing position and Tom is just the janitor. Ben discovers yoga to the dismay of Judith and Phil fights the squirrels running rampant in his backyard.

The parents get trapped in Phil's garage with unresolved tensions and hash brownies; Tom and Jessie duel in the kitchen over what to serve their parents for dinner.

Tom and Phil team up in an ill-fated business scheme; Jessie gets in over her head when helping Judith re-design her kitchen.

When Phil's school pal Serena bikes into town with for a surprise visit, she has an unusual request. Jessie & Tom's sleep troubles lead to a temporary separation.

A fight between Phil and Tara forces the newlyweds to take Phil on as a roommate.

Life as a married man can be all-consuming: arguments, in-laws, make-up sex, normal sex. Luckily Tom has a friend like Carter to remind him that he's still eighteen. So, at Carter's insistence, Tom accompanies him to a campus party for some innocent fun. Innocent, that is, until Carter spots his dream girl and asks Tom to distract her friend by being his Wing Man... his unwed, available Wing Man. With no pressure to hook up, Tom finds it easier to talk to the girl, even tell her things he can't say to Jessie. What's the worst that can happen? The hot girl you're pretending to be interested in wants to have sex? You run off and accidently forget your cellphone? Or your wife calls said cell phone and finds out about the whole thing? Meanwhile Jessie gets a peek into Monica's Sex-In-The-City lifestyle when she helps her design her new pad. The Poster Girl for the Single Life starts to rub off on Jessie. One night at the club, Jessie gets carried away and ends up losing Tom's ring. Now Tom and Jessie both have secrets, and their marriage is about to face its toughest test yet.