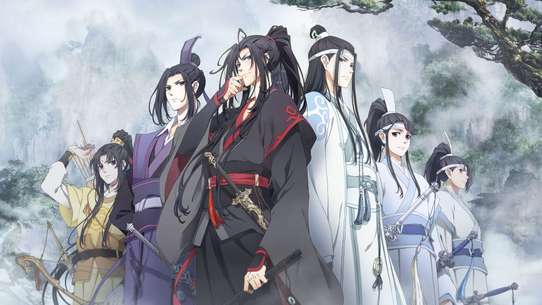 The BEST episodes of The Founder of Diabolism

As the grandmaster who founded the Demonic Sect , Wei Wuxian roamed the world in his wanton ways, hated by millions for the crimes he was accused. In the end, he was stabbed in the back by his sworn brother Jiang Cheng and killed by the vicious ghosts he controlled when the cultivation clans attacked his stronghold to kill him. After 13 years, he is summoned into the body of a lunatic called Mo Xuanyu, who was rejected by his clan and bullied by his family, therefore sacrificing his own body to Wei Wuxian so he could avenge him. He'll soon meet a famous cultivator from his past, Lan Wangji. They will soon face a series of events that will take them to discover the truth behind the tragic events that led to the death of many people and Wei Wuxian himself.

The Wen sect starts to attack the Lotus Pier and its shield formation. The shield eventually breaks and Yu Ziyuan leads her two sons into battle. However, the fight is too huge to handle and Yu Ziyuan decided to put Wei Wuxian and Jiang Cheng on a boat to safety. The mother and son share a tearful goodbye and Yu Ziyuan hands over the Zidian to Jiang Cheng. Wei Wuxian is made to promise that he will protect Jiang Cheng with his life and the two children leaves against their will. They spot Jiang Fengmian on his way back to Yunmeng but Jiang Cheng fears for his safety. They return to the Lotus Pier and finds the place in ruins. When they see their parents dead in Wen Chao's hands, Jiang Cheng acted on impulse and catches the attention of Wen Zhuliu. Luckily, Wen Ning covers up for them twice and helps them to escape the place. They escape to a nearby forest and Jiang Cheng beats Wei Wuxian as he blames him for saving Lan Wangji and cries over his deceased parents.

The Sunshot Campaign starts with the four clans marching into Qishan, but their attacks were in vain as Wen Ruohan overpowers them. Lan Wangji helps the Jiang sect by reinforcing their turf and Nie Mingjue beheaded Wen Xu with his own hands. This victory boasts the morale of Nie Ming Jue's followers and Wen Ruohan orders every branches of the Wen sect to join the fight. When the Lan and Jiang sects goes to infiltrate the Wen sect one night, they discover that something else has already attacked the base, which has left most of its cultivators scared to death. Lan Wangji continues to find more places in the same situation and the usage of talisman are also exact. He affirms that the talismans have a reverse effect to summon evil and are drawn by the same person. On the other hand, Wang Lingjiao is panic-stricken as she suspects that Wei Wuxian has returned to haunt her and the clan. She eventually falls into the same fate. Back in the Jiang sect, the Wen sect starts another attack and overpowers them once again. While Lan Wangji and Jiang Cheng are both injured, Wen Chao reveals that he has already killed Wei Wuxian in the burial mounds. However, a flute starts to play and a mysterious demonic cultivator arrives...

Wei Wuxian and Wen Ning are syncing what happened all these years.

Wei Wuxian discovered some truth about what happened to him in No Night City. At the same time, they both knew Qinghe Nie Sect's family secret.

The fierce corpses are ordered to attack, but they only go for the Wen sect. Lan Wangji calls the technique sinister but deems the cultivator to be a friend instead of a foe. The deceased Wang Lingjiao starts to attack Wen Chao and Wen Zhuliu, and the cultivator finally descends upon their eyes. When he speaks, Jiang Cheng finds his voice familiar. The cultivator overpowers Wen Zhuliu as he is able to take his golden core and smash it into pieces. He then finally reveals himself to be Wei Wuxian, catching the three by surprise. Wei Wuxian continues using his dark abilities to kill both Wen Chao and Wen Zhuliu. With both dead, Lan Wangji warns Wei Wuxian of the price of pursuing demonic cultivation and fears that he will not be able to control it. But Wei Wuxian has already lost his past cheerful self and cannot detect Lan Wangji's act of kindness when the latter offers to take him back to Gusu. In the end, Lan Wangji leaves the battlefield in anguish as Wei Wuxian stays with Jiang Cheng. The brothers successfully take back Lotus Pier but continues to find a way to stop the rest of the Wen sect.

Wei Wuxian recalled some important facts about what happened to him in No Night City.

Lan Wangji and Wei Wuxian follows up the traces and found a grave. And then they start to investigate it.

With the beast angered, the Wen sect escapes from the cave and blocks the entrance, preventing anyone else from leaving. Lan Wangji points out that there is another opening as there are maple leaves despite the lack of its trees. As the beast returns to sleep, Wei Wuxian and Jiang Cheng are appointed to dive into the water to search for the way out. However, Wei Wuxian accidentally awakens the beast while Jiang Cheng emerges with good news. Wei Wuxian stays to hold off the beast while the others can have a chance to escape. But Su She accidentally shoots him in the shoulder with an arrow, causing Wei Wuxian's powers to weaken faster. While everyone have escaped, Lan Wangji stays to help Wei Wuxian. The two fights off the beasts but the cave is now blocked once again, so they tend to each other wounds and Lan Wangji tearfully confesses about his worry for his family. They make a deal to wait for three days before engaging to fight the Tortoise of Carnage by themselves. They eventually attempt to fight the beast with the Lan sect's Killer String Technique. When Wei Wuxian dives in to lure the beast, he is drawn to a mysterious sword hiding deep within that is full of resentful energy.

Wei Wuxian was captured by Jiang Cheng. Wei Wuxian must try to escape.

Lan Wangji successfully kills the beast and pulls Wei Wuxian out of the water. As an attempt to keep Wei Wuxian awake, Lan Wanji plays a song that he has composed specially for him, although the latter still passes out anyways. Wei Wuxian wakes up in his own room after being saved by Jiang Cheng. He then learns that the Lan sect leader has passed away and the Wen sect has taken all the credit for the killing of the beast. When Jiang Fengmian and Yu Ziyuan comes to visit, the family once again has an argument over Jiang Fengmian's unfair treatment to Jiang Cheng. When the parents leaves, Jiang Cheng gets angry at his own father for never taking him seriously as a Jiang and recounts how he came back to Yunmeng with great difficulty. Wei Wuxian then promises him that he is worthy to be the next clan leader and that he will be his subordinate instead, just like their own fathers. The Wen sect continues with their plan to set up Supervisory Offices in every clans. Wang Lingjiao comes to Yunmeng to demand Yu Ziyuan to punish Wei Wuxian with her Zidian. Without Jiang Fengmian around, Jiang Cheng is unable to stop her himself. When Yu Ziyuan is about to cut off Wei Wuxian's hand, she stops to punish Wang Lingjiao instead as she crossed the line of proper hierarchy.

Back in the Cloud Recesses, Lan Wangji is reprimanded for sending disciples to search for the two as it is too dangerous, but Lan Qiren defends his motives. Lan Wangji then laments that Wei Wuxian and Jiang Cheng are yet to be found even though Jiang Yanli was already saved. Wei Wuxian and Jiang Cheng manages to take cover in a village, but the former finds Jiang Cheng missing when he returned with food. He rushes back to the Lotus Pier to save a weakened Jiang Cheng and Wen Ning hides them in his room to prevent them from being caught. While Wen Ning's sister Wen Qing had originally disapproved, she eventually agrees to heal the brothers and keeps them safely hidden for a few days before Wen Chao returns. When Jiang Cheng wakes up, he reveals that his golden core has already been melted and his spiritual energy is gone. To make matters worse, his instability causes him to get defensive against Wen Ning as he is of the Wen sect. Wen Qing then makes him sleep and tells Wei Wuxian to wake him up when he has recovered. Wei Wuxian then looks at his spiritual energy for one last time as he is faced with the decision to help Jiang Cheng get back his golden core.

Wen Chao reports back to the Wen sect leader Wen Ruohan about the incident at the archery competition, stating that the four clans had tricked him. This leads to the start of a series of malicious plans to take control over the four clans. The Cloud Recesses is burned down by Wen Xu, leaving the Lan sect leader gravely injured and Lan Xichen to disappear without a trace. The Wen sect also orders for disciples to be dispatched to Qishan as an attempt to keep them hostage. Their swords are confiscated and they are forced to search for the cave that Wen Chao wants to nighthunt in. Anyone who disobeys will have their Golden Core melted by Core-melting Hand Wen Zhuliu. When Wei Wuxian learns of the burning of the Cloud Recesses, he offers to carry Lan Wangji on his back as his leg is injured. But the latter once again refuses the kind offer. During the search, Wei Wuxian saves Mianmian who is being harassed by Wen Chao, stalling him so that his lover Wang Lingjiao can see his actions. In the cave, Mianmian is offered as a sacrifice to lure the beast out, but some disciples disobeyed and protected her instead, causing Wen Chao to order his people to kill them. The commotion causes the beast to wake up and Wei Wuxian sacrifices himself to protect Mianmian from Wang Lingjiao's branding iron.

Wei Wuxian brings Jiang Cheng to Yiling to meet Baoshan Sanren, ordering him to keep his blindfold on at all times and introduce himself as the son of Cangse Sanren. As Wei Wuxian waits on the foot of the mountain, he is ambushed by the Wen sect. After the sword has pierced through his chest, he is weakened and thrown into the burial mounds where he is left to die. Lan Wangji arrives at Yiling upon notice and finds Wei Wuxian's bell that has fallen to the ground. In the attempt to search for him, Lan Wangji plays the song of Inquiry back in Gusu, but there has not been any news of his whereabouts, whether dead or alive. Lan Xichen finally returns and the fight against the Wen sect soon begins. The Lan sect holds a meeting in the Cloud Recesses to convince the other sect leaders to join them in their alliance. Jiang Cheng also shows up to express his urge for revenge. Back in the burial mounds, Wei Wuxian survives the fall and gives in to the resentful energy.