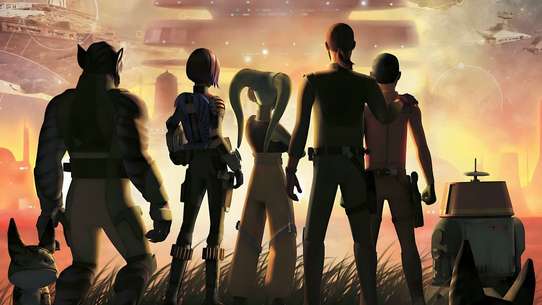 Set between the events of Star Wars: Episodes III and IV, the story unfolds during a dark time when the evil Galactic Empire is tightening its grip of power on the galaxy. Imperial forces have occupied a remote planet and are ruining the lives of its people. The motley but clever crew of the starship Ghost — cowboy Jedi Kanan, ace pilot Hera, street-smart teenager Ezra, the “muscle” Zeb, warrior firebrand Sabine, and cantankerous old astromech droid Chopper — is among a select few who are brave enough to stand against the Empire. Together, they will face threatening new villains, encounter colorful adversaries, embark on thrilling adventures, and become heroes with the power to ignite a rebellion.

After gaining information about the Sith, Kanan, Ezra, and Ahsoka battle the Inquisitors with the help of a new ally, but are overmatched when Vader arrives.

Ezra and the Ghost crew look to complete their ultimate mission: to liberate Lothal from the clutches of the Empire.

Kanan, Ezra and Ahsoka gain information about the Sith and battle the Inquisitors with the help of a new ally, but when Vader arrives they quickly find themselves overmatched.

Reacting to a vision of Maul, Ezra defies Hera and Kanan to travel to a remote planet in hopes of stopping the former Sith Lord from carrying out his plans.

#6 - A World Between Worlds

While the other rebels engage the Imperial forces outside the Jedi Temple, Ezra gains access inside and experiences a stunning revelation.

The Ghost Crew infiltrates the Imperial headquarters on Lothal to save one of their own.

Trapped on Atollon with the rebel base under siege, Hera and Kanan fight to keep the squadron alive as Ezra attempts to rally help from an unexpected source.

#9 - Fire Across the Galaxy

The rebels must infiltrate the heart of an Imperial fleet to rescue Kanan.

Fearing that the identity of a rebel spy will soon be discovered by the Empire, the rebels launch a plan to rescue the spy before he is caught.

In final preparations for their attack on Lothal, Phoenix Squadron’s plans are disrupted when Grand Admiral Thrawn discovers their location.

Kanan, Ezra, and Ahsoka return to the Jedi Temple on Lothal, seeking answers from Yoda about the Inquisitors’ ability to continually track the rebels.

To help recruit her people to join the rebels, Sabine reluctantly agrees to learn to wield an ancient Mandalorian weapon but finds the challenge more difficult than expected.

Ezra calls in every favor he can to rally together a ragtag group for a seemingly impossible fight against Governor Pryce and her Imperial forces.

Ezra leads the Ghost crew back to the Jedi temple on Lothal where they discover that the Empire has diabolical plans for the powerful secrets it holds.

Ezra must face a great challenge as part of his growth as a member of the team.

Haunted by visions of Maul, Ezra must journey across the galaxy to engage in a strange ritual to sever his connection to Maul.

The Rebels send Ezra on an undercover mission into the Imperial Academy to steal a decoder. When a couple newly made academy friends are put in danger by an edict of the Emperor, Ezra attempts to escape from the Academy with them.

Hoping to enlist her family to help the rebels, Sabine returns to her home world with Kanan and Ezra but soon finds herself embroiled in her family's power struggle for Mandalore.

Zeb and Agent Kallus find themselves stranded on an ice planet after a failed Imperial ambush of the rebels. With Kallus injured from the escape pod crash, he and Zeb must work together to survive the harsh conditions.

After being separated from Hera and Kana, Ezra and Sabine join the desperate quest of Saw Gerrera to hunt down the Empire's elusive secret super weapon.

The rebels intercept a shipment of weapons intended for the Empire and accidentally end up hosting a pair of droids.

When a routine refueling mission goes awry, the Ghost crew find themselves transporting an important rebel leader across the galaxy, pursued by Imperial warships.

During the early rebellion against the rule of the Galactic Empire, Princess Leia Organa of Alderaan is sent to the planet Lothal on a mission to provide ships for the rebel fleet. When the Empire initiates a lockdown, her plan is thrown into jeopardy

The rebels learn that the Inquisitors are seeking out Force-sensitive children, and they work together to protect the young ones from the Inquisitors' pursuit.