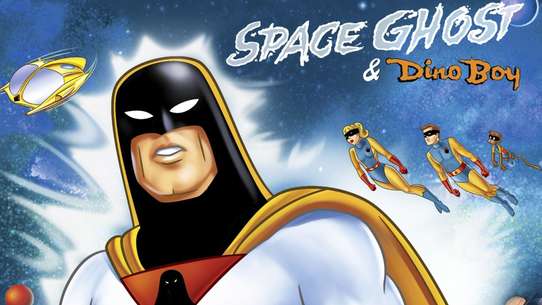 The BEST episodes of Space Ghost and Dino Boy

Space Ghost started out as a scientist, but later was recruited into a member of the intergalactic police. His abilities come from his suit that allows him to fly, and the power bands on his wrists can get him out of almost any situation. Space Ghost is assisted by the twin duo Jace and Jan. They both sport jetpacks that allow them to fly and inviso belts that turn them invisible. They also have communicators that allow them to contact Space Ghost. And finally there is Blip, a pet of the Space Ghost crew that also sports the jetpack and inviso belt. Blip does his share of getting everyone into and out of trouble. The Space Ghost crew is based out of the Ghost Planet. From there, they patrol a small sector of space with the Phantom Cruiser (sometimes referred to as the Ghost Ship). Together, the Space Ghost and the kids fight against the forces of evil that are wreaking chaos in space

The Spider Woman uses Jan and Jace as bait to lure Space Ghost into a trap so she can exact her revenge. Can Space Ghost escape the trap and rescue the kids?

Dino Boy and Bronty have a run in with the ferocious Rock Pygmies. Can they escape from these fearsome fighters and can Ugh make it in time to help?

Jace, Jan, and Blip crash land on a planet. A giant ape meets them there. They are captured by Giant Bats and taken to the lair of the Creature King. He plans to take over other worlds with his army of monsters. Space Ghost arrives and battles the monsters. Blip knocks out the Creature King with a heavy object. The Creature King escapes with one of his Giant Bats.

One of the people known as the Bird Riders is knocked out of the sky by the Rock Pygmies and now Ugh and Dino Boy rush to his aid. Can they make it in time and save him from the fierce pygmies?

An earthquake panics Bronty and he runs into a cave which leads to a mysterious valley where a giant captures him. Can Dino Boy and Ugh save their pet from this fearsome Goliath?

Ugh is captured by the masked Wolf People who plan to torture the caveman before putting him to death. Can Dino Boy and Bronty rescue him in time and save him from this terrible fate?

A tribe known as the Saber-toothed people attack another village and they capture Dino Boy with their so called "Fire God." Can Ugh rescue Dino Boy before he is sacrificed to the true "Fire God"?

A tribe called the Bird Men pursue a young caveman named Goom-wah and Ugh and Dino Boy help the young caveman to escape his pursuers. Can they get him back to his village by taking the treacherous river route full of dangerous animals and the Snake People tribe?

Ugh and Dino Boy get separated by a volcanic eruption and Dino Boy winds up in a valley of gigantic insect and the fearsome tribe of giant fire ants. Can Ugh find him in time and save him from the infernal insects?

Dr. Soonev accidentally creates an energy monster and in his effort to destroy it, he makes it stronger. When he realizes what he has done, he calls in Space Ghost for help.

Dino Boy's caveman friend, Ugh, is stung by a poisonous wasp and Dino Boy must go to Mist Island, Land of the Moss Men, to retrieve the herbs needed to cure his friend. Can Dino Boy get the herbs and make it back in time to save Ugh?

The Moss Men have captured Dino Boy. Can Ugh save him before he is sacrificed?

The Schemer is up to his old tricks and plans to do away with Space Ghost and crew. Can they escape the deadly trap in time?

Space Ghost and the kids make a landing on a planet to explore. They quickly find out that there is an evil scientist on the planet. He draws people to the planet to capture them for his unusual collection.

The Robot Master: Metallus has contructed a huge robot fleet and takes over Ghost Planet. Can Space Ghost defeat such a numerous foe?

The kids and Blip are captured when they are forced to stop for repairs on their ship. The Cyclopeds take them to the evil Cyclo and he sends them into his maze. When Space Ghost realizes the kids are missing he tracks down their ship and makes plans for a rescue.

Metallus has built an armada of specialized robots. Can Space Ghost and crew defeat all these metallic menaces?

People are disappearing in the desert and the local military calls in Space Ghost to investigate the disappearances. Can Space Ghost find the one responsible for the mystery?

The Lurker and his partner One Eye have been preying on ships that pass close by and now they have their sights set on the Phantom Cruiser.

Zorgat, ruler of the rock robots, tricks Jan and Jace into a trap to lure Space Ghost. Can Space Ghost make it in time to rescue the kids and stop the madman?

Ugh is captured by a group of sun-worshipers and is to be their sacrifice for their god. Can Dino Boy and Bronty save him from this horrible fate?

Mettalus has just destroyed the planet Beta with his missiles. He is now threatening to do the same to Earth unless they meet his demands. Space Ghost must surrender to Metallus. Can Space Ghost save Earth as a prisoner of Metallus?

The Lizard Slavers capture Jace and Jan in an energy beam while the twins are investigating a strange planet. The Lizard Slavers hijack ships and sell the passengers as slaves. Space Ghost and Blip arrive in the Phantom Cruiser on inviso power and capture the Lizard Slavers. The Slavers' are then picked up by the Galactic Patrol.

Space Ghost is captured by the Black Widow. Can Jan, Jace, and Blip rescue him before it's too late?

Dino Boy is captured by a race of winged weirdos called the Vampire Men and is taken to a cave to be sacrificed to their "Bat God." Can Ugh and Bronty get there in time to rescue Dino Boy from this horrible fate?