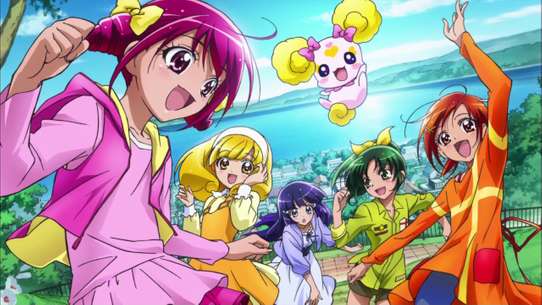 The BEST episodes of Smile Precure!

Once upon a time, there was a country known as Märchenland where fairy tales mingled together. However, the Evil Emperor Pierrot has invaded the country and sealed away its Queen. In order for the Queen to be revived, the Cure Décor, tokens of happiness, must be gathered. To gather them, the fairy Candy came to Earth to search for the next Pretty Cures. It's there that Candy meets Hoshizora Miyuki and the two of them decide to gather the Cure Décor together. * Ninth installment in Toei's long-running popular Pretty Cure franchise for girls.

#6 - An Around-the-World Trip through the Book Door!!

#10 - United as One! Miracle Fashion Show at the Culture Festival!!

#21 - The Start of End! PreCure VS Three Subordinates!!

#23 - The advent of the strongest Pierrot! Persevering power and the light of hope!!

#24 - The Lights Shining To the Future! Deliver it! The Greatest Smile!!