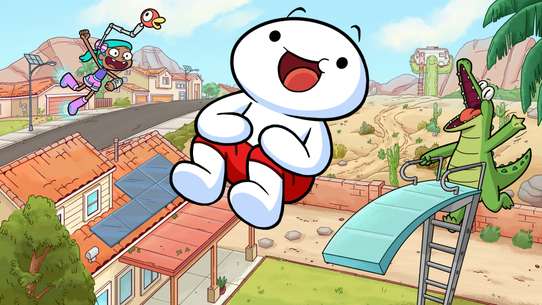 The BEST episodes of Oddballs

Every episode of Oddballs ever, ranked from best to worst by thousands of votes from fans of the show. The best episodes of Oddballs!

Follow James, a bubble-shaped boy, whose observations on life fuel his comedic rants at everyday annoyances and elevates them to laughably absurd heights. Along with his best friends Max (a talking crocodile) and Echo (a girl who claims to be from the future), James' ridiculous schemes to question norms often result in disaster.

James goes looking for the grandmother he's never met, only to discover that she's actually a robot gift service his parents signed him up for.

After learning he can be excused from gym class for donating blood, James gives so much that he shrivels up and gets mistaken for a senior citizen.

The day after James kills a fly, Mr. McFly reveals his grandmother is missing. Thinking he killed Grandma McFly, James scrambles to cover up his crime.

James' mom turns him into a smartphone to see if he's responsible enough to have one. But staying damage-free proves harder than he expected.

While waiting for the ultimate slow-cooked ribs, James and Max meet a girl named Echo who claims she's from a future with no processed foods.

Instead of confronting Echo about her messiness, James tries to passive-aggressively get her to move out of the RV... but the plan blows up in his face.

When the parents in Dirt ban their kids from doing anything risky, James starts a pillow fight club for his peers to release all of their excess energy.

When James learns he's too old for the kids' menu, he heads to Dirt's cloning lab so he can have as many of his favorite dino nuggets as he wants.

Believing he's in a "kid-life crisis," James decides to take a day off from school, but it's repeatedly interrupted by a pesky door-to-door salesperson.

Tired of being the only one he knows without a "thing," James joins the school's competitive feelings club. Only problem is, that's Max's thing.

After burnt toast ruins their sleepover, James and Max create "Toasty," a sentient toaster - but they have wildly different ideas on how to raise him.

When James accidentally saves Mr. McFly from a school bully, the troublemaker takes his revenge by entering James's body to wreak havoc from within.