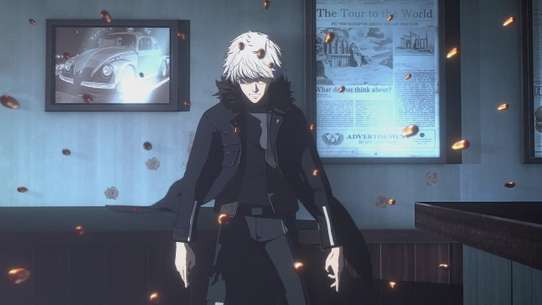 The BEST episodes of Night Head 2041

With Naoya taken hostage, Naoto is forced into a risky and dangerous raid on a local television station. When the raid goes wrong, both he and Naoya are forced to fend for their lives.

The truth about Naoto and Naoya's past, and what happened in the mysterious World War III, is revealed at a strange facility that lies between two worlds...

A climactic showdown with the strange woman behind the SWE shows there's more to the story than meets the eye.

As the world stands on the brink of annihilation, the connection between the brothers is revealed.

#5 - Protection and Salvation -Our Destiny-

As secrets are revealed in the far land of Russia, Special Weapons Enforcement makes a deal with the government to bury everyone involved in a deadly bombing raid.

Naoto and Naoya have an encounter with Special Weapons Enforcement at a run-down diner, where the government has tracked down the so-called psychic known as "Miracle Mick."

#7 - Revelation of Destruction -March to Decimation-

Yuya and Takuya meet a mysterious prophet who is commanding the SWE from the shadows.

Naoya is wounded after their encounter with SWE, but the brothers find help from an unexpected source: a group of rebels fighting to bring back free speech and thought to Japan.

The SWE team gets its first mission: tracking down series of bizarre suicides at a school. But things go wrong when they find out they're just as vulnerable to mind-control as the victims themselves!

Something is wrong with history. There was a huge war that nobody can really remember, and a massive number of people are said to have died in it. Clues to this mystery arise from an unexpected source when Naoya and his brother meet a woman who went to school with the mysterious Shoko Futami...

In a society where any depiction of the supernatural is banned, two brothers on a special forces team track down a supposed cult leader to a seemingly abandoned building. But when the raid goes wrong, they find they have powers that they never suspected...

#12 - Inheritance and Reincarnation -Start Over-

Finally, as Okuhara predicted, the world has begun to disappear. Security captain Honda tries to erase the Kirihara and Kuroki brothers in order to protect the present world. However, Honda's power cannot stop the flow. Okuhara, who had the idea, entrusts the future to two brothers. Naoto and Naoya, Takuya and Yuya who were entrusted with everything-