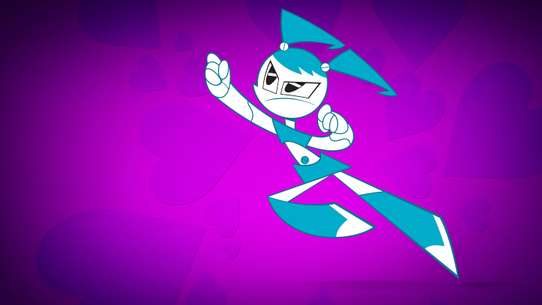 The BEST episodes of My Life as a Teenage Robot

While most kids think their own problems are the end of the world, there's one girl whose problems really are the end of the world. My Life as a Teenage Robot is the story of Jenny, a super-powered robot with a super-sensitive teenage heart. Her primary function is to protect the planet from certain disaster, but, like all teenagers, she has her own ideas about how she would like to live. Defending the Earth has become a mundane chore, and she would rather do more exciting things like go to high school and be allowed to drive the family car. My Life as a Teenage Robot, a spin-off from Nickelodeon's hit Oh Yeah! Cartoons (under the name My Neighbor Has A Teenage Robot), was created by Rob Renzetti and is executive produced by Renzetti and Fred Seibert. This show is the third of three spinoffs of Oh Yeah! Cartoons, the others being ChalkZone and Fairly OddParents.

#1 - Voyage to the Planet of the Bikers

The Space Bikers have managed to slag Jenny into their new motorcycle, and now she and Tuck are en route to their hideout to demand them to change her back!

While on an away mission in Japan, Jenny winds up losing one of her language system discs for English speech. Now, Jenny can't switch off from speaking in full Japanese, which is a problem when she can't tell everyone what is happening.

#3 - The Return of Raggedy Android

Mezmer's is a popular hangout spot for teens all over town, but the owner, Mr. Mezmer, has a strict "No Robots" policy. Desperate to get in, Jenny dons the new and improved exo-skin to pass off as a "perfectly normal human girl". But what happens when the exo-skin refuses to let Jenny take it off will result in big trouble.

Jenny wants to go to the town fair, but Dr. Wakeman fears that Jenny will spook the townspeople with her presence. When Jenny gets a hold of a prototype "exo-skin" for her to wear, she sees her chance to mingle with the fairgoers. However, she should have waited until the exo-skin was finished, for it is making Jenny look even freakier.

Due to internal disputes, the Teen Team has broken up. With no place left to go, Misty heads back to Earth to be with Jenny. Misty's appearance in school, however, earns her teasing from Brit and Tiff. Scorned, Misty convinces Jenny to get back at the Krusts via a prank war. The only problem, however, is that once Misty gets started on something, she doesn't know when to stop. Jenny's going to have to convince her pal that enough is enough before things get too serious.

After an experiment goes bad in a science fair, all of Dr. Wakeman's XJ robots at home mysteriously begin to run amok, and even Jenny herself became affected. Who is responsible for this heinous crime?

A simple snowball battle between Jenny, Brad, and Tuck gets interrupted by a strange robot, who wants to invite Jenny into the all-robot "Cluster" as a new member. However, when Jenny shows no interest in joining a race of robots that plan to enslave humans for manual labor, the cold war commences.

Jenny takes the Silver Shell to the Sadie Hawkins school dance, and Sheldon hopes that he can impress Jenny enough to reveal his identity to her. Everything starts going wrong, however, when Letta and the Space Bikers crash the dance.

It Came from Next Door Jenny decides she'd rather spend time making friends with neighbor boys Brad and Tuck than stay in her room waiting for dangers to threaten the Earth.

Dr. Wakeman is coming to Tremorton High to speak at an assembly. The main topic: Jenny. Now Jenny is desperate to get away before the assembly starts, and is even going so far as to ask Vexus to start a fight with her.

Tired of being stuck under Jenny's shadow, Brad sets out to be his own hero. However, he finds himself in hot water when he runs afoul of the not-evil scientist Dr. Locus and his daughter Melody (who's way more than she appears). Dr. Locus wants the XJ-9 schematics for reasons yet unknown and, when Jenny gets knocked out in battle, Brad's going to have to prove himself.

Jenny has an invitation to Don Prima's latest party, and she's gotten a tune-up and a new paint job just for the occasion. However, Brit and Tiff are ready to do anything to sabotage Jenny's chances to impress at the party. Mudslinger's first appearance.

Tuck admires the Silver Shell, so he manages to "convince" Sheldon into making him Silver Shell's faithful sidekick, the Tin Can. Being a sidekick isn't quite what he expects, though.

The Teen Team has come to Earth, and they are quite impressed with Jenny's abilities. Jenny seems more than excited to join, but is she willing to ignore her other friends in favor of a group of heroes that are mostly prejudiced against "normal people"?

A group of aliens worship Jenny after she is mistaken for a "comet goddess". It's fun at first but they soon drive Jenny crazy. However, when the aliens demand that Jenny summon the sun to turn her Earth into a comet, she retaliates by putting their spaceship in orbit around the sun. The Earth is saved, but someone's missing...

Jenny has managed to get herself invited to Brit and Tiff's slumber party, and, as usual, Jenny's naiveness leads her to cause mischief all over town to impress the Krusts. Now, Dr. Wakeman needs to stop Jenny before Skyway Patrol can catch up to her daughter.

Jenny is preparing for the greatest challenge she's ever faced... high school. She's looking to make some new friends, and she's found some in Brit and Tiff Crust. Unfortunately, the Crusts don't quite share the same feelings. Jenny's going to learn the hard way that not all people can be trusted.

Tuck can't help but call Jenny for every little thing that happens. But when a big problem arises, Tuck's call for help winds up going ignored.

Jenny really wants a popular music player called the "Musique," but it's very expensive. So Jenny tries another method: steal it!

Jenny fails an audition for the school play of Romeo and Juliet, due to her being a robot. However, her views are questioned when two different races of aliens land for a surprise visit.

When Jenny saves local school geek Sheldon from a gang of bullies, he quickly becomes her new best friend. The only problem? Sheldon is positively smitten with Jenny, and just won't leave her alone.

If Tuck doesn't pass his next assignment, he's going to wind up repeating the second grade. His assignment: a project on his personal hero. His subject: Jenny. His project: create a movie centering around Jenny's life. His personality: too enthusiastic for anyone to stand.

Jenny winds up getting homeschooled by Dr. Wakeman due to her bad behavior at school. Jenny may not like it, but her mother enjoys the chance to teach her daughter... perhaps too much.

After a group of runaway living fruits and vegetables is stopped by Jenny, a jealous Skyway Patrol lieutenant seeks to permanently shut her down.