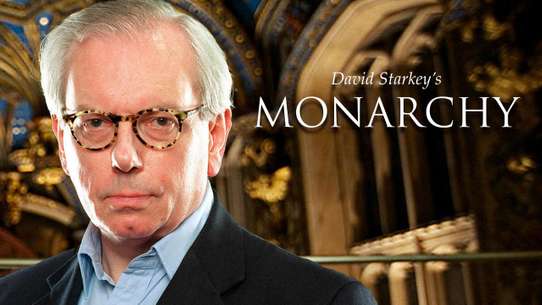 The BEST episodes of Monarchy

Every episode of Monarchy ever, ranked from best to worst by thousands of votes from fans of the show. The best episodes of Monarchy!

Monarchy is a Channel 4 British TV series, 2004-2007, by British academic David Starkey, charting the political and ideological history of the English monarchy (later British), from the Saxon period to modern times. The show also aired on PBS stations throughout the United States, courtesy of the television station WNET.

The historian examines the reign of King Henry VIII, who inherited the throne at the age of 17 and became overwhelmed by a desire for fame. In his search for love and the need for an heir, he divorced his wife Catherine of Aragon to marry his mistress Anne Boleyn - severing England's allegiance to the Pope in Rome and giving him powers no English king had ever exercised before

When, in 1789, the Bastille prison in Paris was stormed and the French Revolution began, few in Britain - least of all King George III, who was recovering from one of his bouts of madness - thought that it would lead to a cataclysmic war with France.

In this stirring program, Dr David Starkey profiles a mediaeval superstar, King Henry II of England, whose dominion stretched from the moors of Scotland to the foothills of the Pyrenees, including more than half of modern France. And he tells some of the most dramatic and significant stories of English history: the bitter tale of King Henry's conflict with Archbishop Thomas Becket, which ended in Becket's murder; the struggle for the nation's liberties in Magna Carta; and the beginnings of the modern parliamentary system.

Looks at the events of 1688 and its aftermath, when the unpopular Roman Catholic King James II was overthrown and his replacement with the protestant Stuart Mary and her husband William of Orange. Considers how the consequences of this was a curtailing of royal power and the basis for the constitutional monarchy and relation with parliament that exists in Britain to this day.

Looks at the selection and crowning of George I as British monarch in 1714, and the events of his reign and also those of George II and George III. Considers how the breakdown in the relationship between the prime minister William Pitt and George III led to the American War of Independence and the loss of the US colonies.

In this final episode, Dr. Starkey takes up the story of Shakespeare's kings: Richard II, Henry IV, Henry V and Henry VI. It starts with the usurpation and murder of Richard II and ends in a bloody civil war in which the English royal house tears itself apart. The last medieval kings see the institution of the monarchy reach a crisis point in which its future seems far from certain.

In episode two of Monarchy Dr. Starkey chronicles the stormy path of the Anglo-Saxon kingdom of England, the world's first nation state. He tells how, assailed by blitzkrieg from the Danes of King Canute, it survived to take its captor captive; and how, driven by civil strife, it nonetheless restored itself to power until through a historic misfortune, it fell in the end to the knights of William the Conqueror.

From the devastation of the initial Norman conquest, through the intrigues and murder of King William II, to the civil war in the reign of King Stephen, 'when God and his angels slept', Dr Starkey illuminates the experience of a turbulent time which changed the course of English history.

In this episode Dr. Starkey explores a century which saw three Edwards reign: father, son and grandson. Edward I took the image and might of the English monarchy to new heights. He was the new Caesar; a man who would unite England, Wales and Scotland into one kingdom. All his achievements almost came to nothing during his son's disastrous reign which ended in abdication and murder. It would take the third Edward to rebuild the prestige of the English monarch. With his victory against the French at Crecy, Edward III made England great again, but also plunged her into a war with France, which would last one hundred years.

In episode one, Dr Starkey begins his history of the British monarchy in the violence and chaos of the dark ages. There, from a legendary world occupied by dragons and monsters, a uniquely English idea of monarchy, which was able to stand firm in the face of the Viking invasions, emerged. In this first of the six episode series, Starkey tells the dramatic story of the creation of England and the triumph of an English hero, Alfred the Great.

The historian continues his examination of the British monarchy, from the beginnings of the Tudor dynasty to the English Civil War. He re-examines the Wars of the Roses, fought between the royal houses of York and Lancaster in the 15th century, exploring the disappearance of the 'Princes in the Tower' during Richard III's reign and the rise of Henry VII - who became one of England's most hated monarchs

The historian examines the reigns of Henry VIII's three children, revealing how the king's advice to pursue moderation in matters of religion fell on deaf ears as his son Edward enforced extreme Protestantism on the country, only for eldest daughter Mary to reimpose Catholicism after his death. Elizabeth I initially embraced her father's words, but when Mary Queen of Scots arrived in England, religious tensions rose again

he historian examines the reign of James I, the first king of both England and Scotland. From the outset, the new monarch had little time for Parliament and did what he could to limit its influence. His son Charles I went further, effectively removing the government and ruling alone - but when he needed their help to enforce religious rule on the Scots, the resulting conflict led to two civil wars and the monarch was eventually executed

The series concludes with an analysis of the English Civil War, revealing how the country was temporarily transformed into a republic with the execution of Charles I. The historian considers the nature of Oliver Cromwell's rule and how this key period of history altered British perceptions of the monarchy for ever

Looks at the end of the reign of William and Mary, and the changing relationship between Crown and Parliament, and that of Anne and the union with Scotland in 1707 which saw the emergence of Great Britain and how it grew in power.

Looks at the restoration of the monarchy in 1660, and the reign of Charles II.

Death of Queen Victoria, to present day. Speculation on the path of King Charles III or King George VII. This single extended episode completes the series