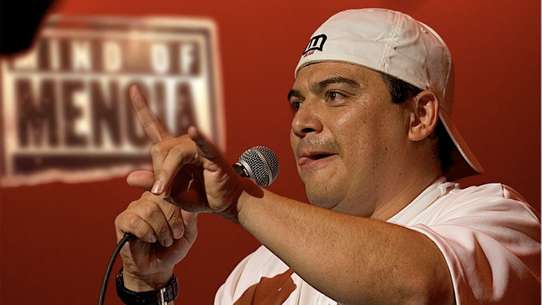 The BEST episodes of Mind of Mencia

In Mind of Mencia, comedian Carlos Mencia mercilessly skewers the current and the cultural, whether in the studio, in the audience, out on the street, or in commercial parodies. Since its premiere in July 2005, Mind of Mencia has relentlessly taken on topics such as ethnic stereotypes, race relations, immigration, war and family. Show favorites include the Dee Dee Dee song, the Sheik Rapper, Judge Carlos and Carlos' brother Joseph. Enter Carlos Mencia's mind, and immerse yourself in his unique, unflinching take on the world.

This episode starts out with Carlos giving some helpful advice about tattoos. Carlos learns to tyalk to animals. We have a segment of the ""Newlymets"". Carlos finishes off the episode with another great segment of ""Why the **** is this News?""

Carlos hits the streets to ask the question "Is Gay the New Black?," featuring special guest star Robin Williams. He also investigates what it would have been like if Jesus was married, in the first installment of "That's F*cking Historical

Carlos makes his famous" DeeDeeDee" catch phrase into a music video. Also, Carlos hosts a wrestling tournament that pits religious icons against one another. Tune in to find out who will rule the earth in Carlos' "Royal Religious Rumble" with co-host WWE's The Edge.

Carlos “Out the Beaner”, lays down the law with stupid people as “Judge Carlos”, and discovers the last white guy left in the barrio.

Carlos hosts the first ""Dee Dee Dee"" Awards, and with the power of freedom of speech let's anyone say anything.

Carlos' Supreme Court picks; ``Carlos the Dinosaur'' teaches kids about real life; ``Why Aren't You Working'' questions, where Carlos goes around the town and bugs people that don't have jobs.

Carlos has developed a children's show that he hosts, that takes place in unknown but developing nation. We also get a peek at what an office would be like if he had Alzheimer's.

High gas prices are a target this week as Carlos sets out to see what people will do to save money at the pump. Also featured is Carlosâ€™s brother Joseph with his new DVD collection.

Want to know how to make a woman happy? Carlos has some suggestions, if you dare. A gay man is a small town is honored in a Carlos way.

Carlos hits the street to ask people what America would be without immigrants. Then, the ghost of Johnny Cochran is back for another installment of "Judge Carlos

Carlos is back for a Third Season on Comedy Central. Carlos's favorite talking dinosaur, Carlosaurus Rex makes a come back to sing his songs for the children.

Carlos hits the streets to advise people how to make their dreams come true, and talks with Tony Hawk about how to realise his own skateboarding dreams. Also, we take a trip into the future to see what the news will be like in 2026.

Carlos treats a group of senior citizens to a sushi dinner to find out what they think about sex, politics, and immigration in "Dinner for 75 and Over." Also, Carlos takes a look at classic fairy tales and retells them with a Mencia spin

Carlos hits the street to find out what the race of the future will look like. He also helps people with their problems through the use of cool R&B slow jams as "Carlos Smoov

Carlos is back for an all new season of Mind of Mencia! This week Carlos takes a look at all the stupid stuff that people did while he was gone. He reveals his big secret in "Wetback Mountain," and he gives a piece of his mind to people who are trying to hang onto their youth in "Act Your Age."

Carlos openly proclaims that the American goverment has not been too smart lately with everything that happened with hurricane Katrina. Next, Carlos compares how black and white people do the same things, but what they do are named differently. Carlos has a segment of ""Ask Whitey"", where Asian, black, and Mexican people ask White people questions. Finally, Mariachi Carlos sings songs to various people about how crazy what they're saying is.

The Wetbacks face off against the Crackers in a Biker Build Off. Carlos goes on a rant about white people being too ""soft"" on their children. Carlos goes to a Renaissance fair. He ends this episode with a set of his ""Badass Back to School"" equipment, and we find out who won the Biker Build Off.

In the premiere episode, Carlos enlists the help of fellow comic Peter Boyle to read his hate mail, and then he investigates racist road signs.

Carlos uncovers the world of ""Desperate Gardeners"" and destroys all of your useless, outdated technology with the help of ""mini-Gallagher.""

Carlos discusses the hot topic of illegal immigration, hits the streets to investigate if people should hit their kids, and gives spring break tips like only Carlos can. Also, Peter Boyle pays Carlos a visit to help translate the real meaning of bumper stickers.

Carlos takes on advertising and shows what ads would look like if he infused them with truth. Also, Carlos spies on his biggest fan's middle-class white neighbors in a segment Carlos calls "Watching Whitey."

It's highlights from Season 3 with original introductions by Carlos.