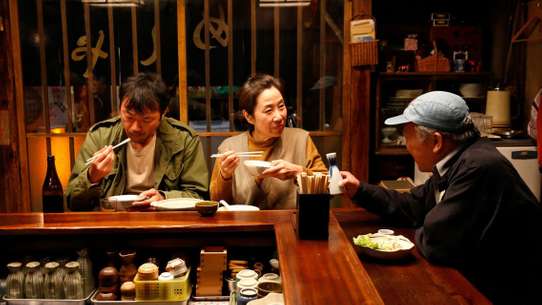 The WORST episodes of Midnight Diner

Set in a small restaurant in the corner of a shopping district. The unusual eatery is only open after midnight, and its standard menu consists of just a single choice. However, the customers still come for the amusing chatter and the proprietor's willingness to cook any dish that they request. This drama depicts the lives of the restaurant's patrons, including a yakuza, an unsuccessful actor, a group of office ladies, a newspaper delivery boy, and a stripper.

In her mid-30s, Chizuru worries her modeling career is ending. An encounter with a high-powered fan gives her a chance to evaluate her priorities.

A diner regular reunites with an old classmate who, despite a good upbringing, now works a menial job to support her troublesome nephew.

A group of young film makers producing a movie about a suicide at the same site bumps into a mysterious young woman, and can't shake the feeling she may be some ghostly reincarnation of the victim.

The shared love of fried rice omelets forms an intercultural bridge between a young Japanese physicist and a Korean girl.

The Ueharas run a barbershop together. They seem happy, but when his wife goes on a trip, a beautiful kimono instructor catches Mr. Uehara's eye.

An office worker who loves pork steaks knits sweaters for the men she adores, but her affections -- and handiwork -- are not always appreciated.

As December comes to a close and the regulars gather at the diner, the Master takes a look back at his memories of the year.

Upon finishing the last of his late mother's pickled plums, a man suddenly wonders what will become of his erotica after he passes away.

A young screenwriter has to live through a scandal after her affair with her producer is revealed.

A bowl of cold noodles reminds a soon to retire detective of a fugitive that had eluded him his entire career. Could he possibly capture this elusive thief before they both retire?

A dish of sauteed Chinese yam rekindles the connection between a young wife and her former lover, with whom she shares a hidden professional past.

A lonely little boy with only a gambler to take care of him hopes to make a connection with a bar girl over a mutual appreciation for egg tofu.

Two aspiring voice actresses stop by for lucky bowls of kitsune udon, but six months later, only one of them seems to have had any luck.

An author with some writers block issue decides to solicit an escort for stress relief, but the chance meeting with her might be more than he bargained for.

Writer Yada and hostess Hikaru bond over their love of horoscopes and chicken cheese cutlet. Secretly, Yada tries to use the horoscopes to woo her.