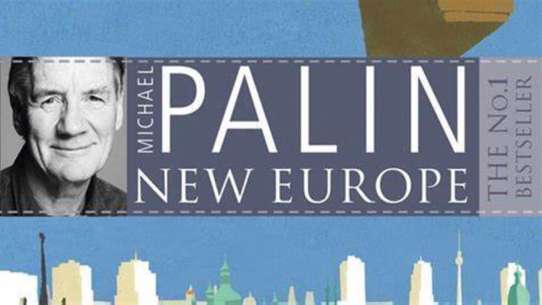 Michael Palin's New Europe is a travel documentary presented by Michael Palin and first aired in the UK on the BBC in 2007 and in the US on the Travel Channel on Monday January 28 2008. Palin visits 20 countries in Central and Eastern Europe. The filming was done in 2006 and early 2007 using HD (high definition) equipment. The result was made into seven one-hour programmes for BBC One and simulcast on BBC HD. A book, New Europe, was also written describing the trip, and illustrated with photographs by Basil Pao.

Countries visited: Slovakia, Czech Republic, Germany High in the Tatra mountains of Slovakia, Michael skins a pig, and learns how to make sausages. He then departs to Brno to visit Tibor Turba's famous mime school, where he is asked to mime a cockerel. Travelling in a DC3, used during the Berlin airlift, he visits the island of Rugen, built by Hitler for his KDF ('Strength through Joy') programme.

Countries visited: Slovenia, Croatia, Bosnia, Serbia, Albania In Medjugoree Michael encounters a visionary who first started having visitations from the Virgin Mary 25 years ago. In Dubrovnik he meets with lute maestro Edin Karamazov who made the recent 'Songs from the Labyrinth' album with Sting. Michael ends this visit with a sheep sacrifice which heralds an afternoon of music and hospitality typically Balkan.

Countries visited: Poland Arriving in Gdansk via canal, Michael meets former electrician Lech Walesa who formed 'Solidarity', Poland's first independent trade union, which led to the demise of communism in that country. Heading to Warsaw he visits the Palace of Culture, Stalin's controversial gift to Varsovians. Michael then makes his own personal pilgrimage to Auschwitz.

Countries visited: Trans-Dniester, Romania Michael travels from Transdniester, a breakaway state from the Republic of Moldova, to the Vaser Valley in Romania, where he joins 80 lumberjacks as they board a wood-fired steam train. He finally ends up at Bran Castle in Transylvania, the ancestral home of Vlad the Impaler and alleged home of Bram Stoker's Dracula.

Countries visited: Hungary, Ukraine Michael travels by road, rail and river through Hungary and the Ukraine, ending in the Black Sea resort of Yalta. Along the way he visits Budapest's 'House of Terror', a National Park in Hortobagy, an area which Attila the Hunwas reputed to have rampaged across, and ends up meeting a Leeds market trader who married the Ukranian prime minister's daughter.

Countries visited: Macedonia, Bulgaria, Turkey Michael makes a remarkable visit to Göreme, where the rocks have been carved to form homes and some of the most remarkable churches of the early Christian era. Leaving the Cappodocia region by balloon, he sails east towards the borders of the New Europe, which if Turkey were to join the European Union would include Iran, Iraq and Syria.

Countries visited: Estonia, Latvia, Lithuania, Russia Michael travels from Tallinn in the north, through Latvia, to Lithuania in the south, sailing into the Baltic from the Russian enclave of Kaliningrad, formerly East Prussia. In Estonia he visits a pyramid house and samples the medicinal properties of leeches. In Latvia he visits one of the most secretive places of the Communist-era, the astronomical telescope.