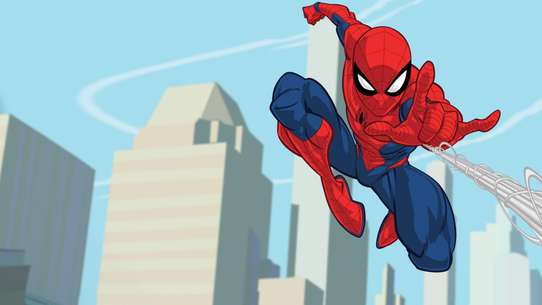 The WORST episodes of Marvel's Spider-Man

An insecure but courageous and intelligent teen named Peter Parker, a new student of Horizon High, is bitten by a radioactive spider and given powers. He becomes a hero named Spider-Man after the death of his uncle and he must adapt to this new way of life.

Spider-Man faces off against his most bizarre bad guy yet, Jack O' Lantern. Then he turns Prowler, a reluctant villain, to the side of heroes when he helps him save his brother.

Spidey tracks the identity of the mysterious boss that put a price on his head and who has been sending villains after him.

Spider-Man's friend is turned back into Rhino by Swarm. Spidey is forced to fight in the Underground Monster Club.

Spider-man's popularity nose dives, thanks to Pete's pictures in the Daily Bugle. Spidey battles a female 'Doc Ock' as the real plan of Dr Octopus is revealed.

A Mystery Villain puts a bounty on Spider-Man's head, bringing on attacks from Panda-Mania, Hippo and Overdrive.

Spider-Man must fight his way through the Super-Villain Holding Facility to challenge The Living Brain, the robot body that is housing the mind of Doctor Octopus.

#8 - The Day Without Spider-Man

In order for Spider-Man to defeat the Goblin King, he must first bring together Doc Ock, Spider-Girl, Ghost-Spider, Miles Morales and Harry Osborn.

Doc Ock must adjust to his new life as a hero and is tested by rising crime boss Sand Girl.

Spider-Man is excited to start his second year as a superhero and as a student at Horizon High but discovers that Doc Ock also claims to want a second chance. Can Otto be trusted?

Peter is accepted into Horizon High, a school of geniuses, where his best friend Harry Osborn was suspended; Peter makes his debut as Spider-Man and must fight the Vulture.

When Spider-Man and his allies attempt to track down the missing and dangerous Lizard, they discover that Venom has returned to seek revenge on the earth.

Peter and Harry must battle through an island of spider monsters to get to Norman Osborn, who appears to control them all; the boys discover the real mastermind.

Anya must step-up and embrace being the Spider-Girl; Spider-Man is lured into the Mysterious funhouse and learns that there is a bounty on his head.

Spider-Man and Miles Morales discover Doc Ock, whose mind has been hiding inside the metal body of The Living Brain, has been behind the mysterious bounty for Spider-Man's head.

Spider-Man must take down the slick new villain, Slyde, as he steals various chemicals from around the city in an effort to create a deadly virus that could wipe out New York.

When the symbiotes attack New York City, Spider-Man must convince Mark Spector to come out of retirement and help protect the city.

#19 - How I Thwipped My Summer Vacation

Peter Parker struggles to balance the best summer vacation ever and his responsibilities as Spider-Man.

Spidey teams up with Ms Marvel to investigate a strange school.

Toddler Groot brings an urgent warning to Spider-Man who has to decode the message and keep Groot out of the hands of A.I.M.

Kraven the Hunter does a live broadcast of his hunt for Spider-Man.

Discovering a vial of the Jackal formula at Horizon High, the Spider Team realizes that the Jackal has returned since the Spider Island crisis. Spider-Man and Ghost-Spider track down Jackal's secret lab in an attempt to thwart the villain's latest evil plans.

The Scorpion is wreaking havoc at the museum and it is up to Spider-Man to stop him.

Pete becomes weary of supplying footage to Jameson that is used to trash Spider-man's reputation. In a bid to scoop Pete, Eddie Brock tries to photograph substance V-252 and Venom is born.