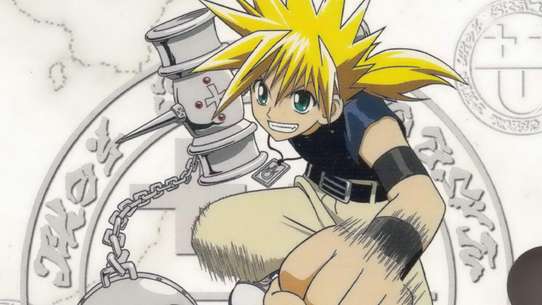 The BEST episodes of MÄR

Every episode of MÄR ever, ranked from best to worst by thousands of votes from fans of the show. The best episodes of MÄR!

Dreaming of a magical world every night, the young Toramizu Ginta yearns to be able to go there. With only his friend Koyuki believing in his dreams, Ginta remains positive despite the slander he receives from others over his dreams. But his wishes are answered, as one day a large door appears in front of Ginta, summoning him to the land of MAR Heaven. In this land, the weapons known as ARMS exist. While initially Ginta greatly enjoyed the discovery of this magical world, he soon learns of the terrible wars that have once plagued MAR Heaven and the upcoming war that may soon appear.

After Ian's defeat, Pozan announces that the final round of the War Games will be held weeks later in Reginlief. Gaira's Training Gate sends Team MÄR to Tokyo. After Ginta saves Koyuki from students of a rival school, Ginta encounters Jack as that gang's leader with no memories of Ginta. When Ginta aims at the ÄRM on Jack's forehead, Jack returns to normal. For some reason, Nanashi appears on a motorcycle and kidnaps Koyuki.

With authoritative clues about "the woman whom she must kill’’ obtained after the fight with Rapunzel, Dorothy goes back to Kaldea with team MÄR escorting her. They learn of the truth behind one of the more shrouded characters at the top of the Chess Pieces’ echelon, its Queen – Dorothy's exiled older sister Diana, Snow's stepmother empress of MÄR-Heaven's majestic kingdom Lestava thereat.

With Kaldea's Orb on Earth, Ginta takes Babbo's Gargoyle to Earth for the final battle. The two end up in Tokyo, where their battle eradicates the city and destroys a large part of the population. Snow's spirit, however, combines with Koyuki's to form one being, and by doing so removing the magical stone from Snow. Ginta uses the stone to create a more powerful Gargoyle that uses the hopes of MÄR-Heaven to defeat the Orb once and for all. With the Orb destroyed, peace brought to MÄR-Heaven, everyone who was killed by King revived, and Danna restored, Ginta returns to his own world with his father.

After Nanashi and Snow's death, Ginta, Alviss, Dorothy, Ian, and Ash discover King's plan to take over Earth. When King attacks, Ash becomes his next victim. He leaves behind a mysterious ÄRM.

Ginta finishes the fight with Phantom, and team MÄR searches for Pozun, needing his Andata to get to Lestava and rescue Snow. Jack, Chaton, Alan, Nanashi find Pozun's younger sister, Porin. Porin takes them to her village, and explains why Pozun was referee for the Chess Pieces.

As Alan's battle with Halloween rages on, Halloween unleashes his Grave Hail ÄRM on him. Once Alan defeats this and survives another of Halloween's waves of flame attacks, Halloween summons his Guardian, Wakan Tanka. Alan summons his own Guardian, which is capable of defeating Wanka Tanka and throwing Halloween to unknown whereabouts, making Alan the victor.

he truth of Snow is finally revealed, that she is connected to Koyuki of Earth through the evilness of Diana, who planted a Magical Stone in Snow's mother to make it all happen. Using their connection, Diana plans to open a portal between both worlds.

Ginta has a rematch with Ian, who has risen to the rank of Knight since their last encounter. Ginta, however, is blinded by his anger of Snow's capture, and Ian is much stronger than he used to be. It is through Ginta's will to save Snow, however, that he defeats Ian and makes him realize revenge won't save Gido.

After Dorothy's death after the death of Diana, Ginta faces off against the Chess Piece King Danna-Orb. During battle, Ginta discovers that his father's soul was within Babbo all along while the Kaldea's Orb was in Danna's body. After Kaldea's Orb is removed from Danna, Kaldea's Orb takes on its true form and invades Earth.

After Alviss' death, Ginta, Babbo, and Dorothy head toward the stolen Kaldean Floating Castle where King is hiding out. Once there, Dorothy faces off against Diana. Once Diana is defeated and killed, King Danna-Orb arrives and kills her.

Alviss faces off against King and discovers that his identity is Danna Toramizu, Ginta's father and the one who helped save MÄR-Heaven six years ago. When Alviss was about to die in King's hands, he saw Rolan and Phantom, who encouraged him to stand up and fight, and so did Bell (although she did not know they were there). Alviss sacrificed himself by holding King down so that his ÄRM a Baoa Qu could activate and blow King (along with him) up. King escapes, but Alviss is severely wounded. Before dying, Alviss uses the last of his magical power to activate the ÄRM that Ash left behind. When Dorothy, Ginta, and Babbo leave to go to the stolen Kaldean castle, Alviss thanks Bell and dies.

Ginta and Phantom finally begin their match. Just before this, however, Dorothy hands over to Ginta a new magic stone for Babbo. Ginta easily defeats Phantom's weakest Guardians, though once Phantom uses his Phantom Glass, Ginta is forced to listen to Phantom's shocking background.

Nanashi takes on Peta in his match. Peta's use of blood draining ÄRM combined with his intelligence is much more than a match for Nanashi.

Alan finally has his battle with Halloween. Some history is revealed between the two since childhood. Halloween also begins a killing spree with the spectators, severely wounding Alan when he tries to defend them.

When Weasel summons Yggdrasil, Jack tries to draw strength from his wish to avenge his father's defeat and surpass his father to defeat Vizel. Soon after Jack regains his advantage, Weasel summons a powerful Guardian, Bird of Rotten Wood that destroys trees, easily defeating almost all of Jack's abilities. Jack, in a final attack, summons his second Guardian and defeats both Yggdrasil and Bird of Rotten Wood, besting Weasel and surpassing his father.

Alviss faces off against Kouga, the weakest Knight, who is jealous at Alviss for looking handsome. Kouga stands little chance against Alviss, and Alviss wins through an incredible show of strength through the use of his new Guardian.

#18 - Battle of the Underground Lake! Nanashi VS Oruko!!

Now accompanied by Nanashi, MÄR arrives in Vestry, a coastal village wrecked after a Chess’ carnage and divides their numbers to help the people and exile the Chess away from that part of the continent. Ginta later befriends Tom, a (self-claimed) native young boy habitué of the haunted Vestry cave while on the other side of the underground route, Dorothy & Nanashi encounters a Chess Bishops-ranked homicidal retard, Orco, and Dorothy's for the first time overawed at Nanashi's prowess.

Ginta's clash with one of the two Chess Pieces, Ian, tends to favour the latter as Ginta's far too inexperienced and unequipped for the use of Babbo. As the situation necessitates it, Edward reverts to his second form, Alan, a man with yet to be revealed identity but much dreaded by the Chess members, buying Ginta enough time to unfreezes Snow and (accidentally) exchanges a kiss with her. In the middle of the confusion, Halloween, a Knight of the Chess Pieces – an acquaintance with whom Alan stays in discordance – arrives to summon his subordinates back for the Chess Pieces' official issuing of war declaration against MÄR-Heaven.

Soon after the confrontation with Alviss, Ginta & co. encounter Edward, a small dog-man introducing himself as the custodian of Snow, a princess currently fleeing from her stepmother queen, an insatiable woman who, out of desire for the world's throne, makes attempts on her stepdaughter's life to reign over the entire kingdom. On Edward's request to rescue the princess, who at the moment is dying inside a frosted palace, Ginta discovers that 1) the girl bears an exact resemblance to his Earth friend Koyuki and 2) the minions (Ian and Loco) that the queen sends after the princess turn out to be none others than Chess Pieces.

Alviss’ arrival brings a dark secret to light: the existence of a rebellious military faction known as the Chess Pieces army, which 6 years ago came within an ace of conquering MÄR-Heaven before it was quelled by the world's guardians, the Cross Guard soldiers; and the need to dispose of Babbo due to its gory history of massacring people alongside the Chess un-dead commander, Phantom. Much persuasion, and even retaliation (though vain) is needed from Ginta to change Alviss’ mind, including a promise to get stronger. Meanwhile, in a lightning-zapped graveyard, one bevy of masked warriors salutes a man, seemingly resurrected from inside his tomb, whom they addresses as "No.1 Knight Phantom".

After aiding Dorothy on her ÄRM hunt, Ginta's forfeited the ownership of the dormant legendary ÄRM Babbo, a sentient weapon that is just as vexing as it is fabled. Ginta's and Babbo's bickering eventually leads to their newly founded company crumbling, landing Babbo in the hands of two ÄRM thief con men, Moku and Chapu. However their identity is quickly exposed, and after Ginta forcibly reclaims Babbo, the two reconcile.

Just before the 180-day deadline reaches its end, Ian uncovers their training spot and battles a physically deteriorated Alan to advance on Ginta's dimension. The trainees finish their session just in time to fend the Rook off, and Ginta settles their duel with a win, using v.2 of Babbo Bubble Launcher.

Ginta Toramizu, an otaku-ish high school student, has had his 102nd dream of a fantasy world that goes by the name of MÄR-Heaven, and is subsequently subjected to many jeers from his classmates because of that, save for his childhood friend Koyuki. One day when he is briefing her on his newest dream, a phantom clown appears and claims him as the chosen Earth dweller to be permitted entrance into that very same wonderland. His embarkment into MÄR-Heaven is greeted by the meeting with a mysterious, beautiful witch named Dorothy and primary knowledge of the powerful magical artifacts existing worldwide – the ÄRMs.

As the meaning of resemblance between Ginta and the Cross Guard former captain Danna dawns on him, Gaira summons him and Jack back to the Training Gate. Meanwhile, Ian approaches Phantom and requests the same, Ginta's true capacity has precipitated the time he carries out his vow: to kill Ginta and Gido's punishment executor.