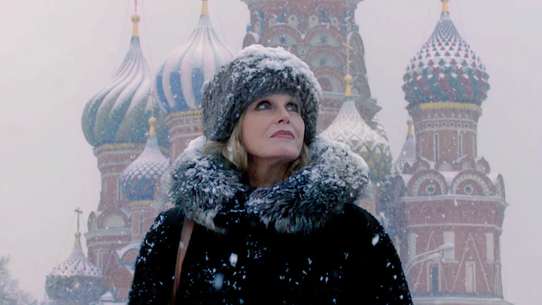 The series sees Joanna travel from East to West, departing from Hong Kong across 5777 miles of both Asia and Europe, through seven time zones, taking in an immense panorama of vistas and cultures, people and places, before her final arrival in Moscow. Everything about this legendary journey is of epic proportions. It cuts across three distinct countries, cultures, landscapes and languages and crosses some of the worlds most geographically challenging, yet resource rich and scenically splendid regions. Joanna will be hopping on and off the train visiting people and places as she travels. By travelling in the opposite direction from most travellers on the Trans-Siberian railway, Joanna can begin her journey in Hong Kong, where she spent her childhood. At the end of her journey at Moscow’s Central Station, Joanna will revisit the location of a photo-shoot she did while modelling in the 1960s. The journey links the two biggest bastions of communist power over the last century, China and Russia, two super powers at a crucial point of radical change in their histories. Sandwiched between these two colossal countries lies Mongolia, whose previous powerful Empire used to control its two current neighbours. The immense proportions of the trip present Joanna with the opportunity to lend her natural curiosity to a richly diverse range of territories and bring viewers an insight into their peoples, languages, landscapes, politics, customs, histories and modern day societies.

In episode two, Joanna is in Mongolia and spends time with some Mongolian nomads, visits a giant statue of Genghis Khan and a gold mine. She spends time in the capital Ulan Bator where she tracks down the amazing Mongolian throat singers before catching the train to Putin’s Russia. She meets Mongolian tradesmen on the train before crossing the border into Siberia.

First in a three-part series which sees Joanna Lumley travel the 6,400-mile route from Hong Kong to Moscow. Joanna begins her train journey in Hong Kong, which she last visited when she was four. She has not been to Moscow since 1966, when she was there as a model at the height of the Cold War. In the first episode, she sets off from The Peak above Victoria Harbour, before jumping on the Mass Transit Railway to Shenzhen, where she catches the bullet train to Beijing. She discovers that more Rolls-Royces are sold in China's capital than anywhere else in the world, visits a bizarre restaurant dedicated to Chairman Mao and encounters an old lady who knew the favourite concubine of Emperor Puyi, the last emperor of China. She then joins the Trans-Siberian, stopping off in Datong and visiting a wild stretch of the Great Wall. From there she travels by overnight train to Mongolia, where she passes through the Gobi Desert and visits a local shaman.

In the final episode, Joanna is in deepest Siberia heading for Moscow, which she last visited in 1966. Her first stop is Lake Baikal, one of the deepest lakes in the world. She drinks vodka with a local fisherman before getting back on the train for Krasnoyarsk where she meets an oligarch. From there it’s across the vast expanse of Siberia to Yekaterinburg, a city with a dark history. It is where the Russian Royal family were murdered. Joanna pushes on for Moscow, where she discovers a very different city from the one she saw in the sixties. She visits Stalin’s nuclear bunker, encounters Russian models before finding the place where she was photographed in 1966 and that inspired the whole adventure.