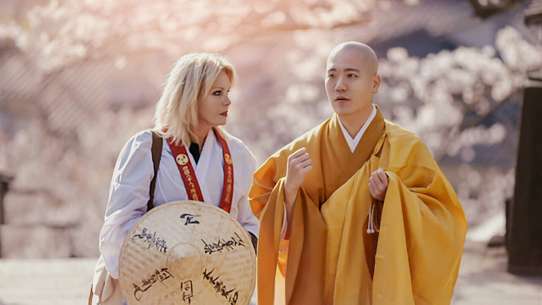 Joanna’s 2,000 mile journey through Japan as she explores some of the most uncharted corners of the country's 6,800 mystical islands. In Hokkaido, Joanna traverses the island’s areas of outstanding natural beauty, meeting some of the country’s most endangered wild animals en route, before heading south towards Tokyo and the ancient capital of temple-filled Kyoto. On foot she takes in the forgotten island of Shikoku – one of Japan’s four main islands – home to the Iya Valley and the yuzu fruit flavours now becoming popular in UK supermarkets. Finally, after exploring the geologically active region of Kyushu with its volcanic landscape and abundance of hot springs, Joanna finishes her journey in Kohama, one of Japan’s smallest and most remote pacific islands, luxuriating on its idyllic beaches.

Joanna flies over the city of Tokyo in a helicopter, walks the Nakasendo Way that once linked Tokyo to Kyoto, and arrives in Kyoto at the peak of the cherry blossom season.

Joanna visits a selection of temples to better understand Japanese Buddhism, stays in the world's first robot hotel and gets an aerial view of one of Japan's most active volcanoes.

Joanna Lumley journeys across Japan. She visits the city of Sapporo during the annual Snow Festival, visits the Fukushima exclusion zone and takes a 'bullet train' to Tokyo.