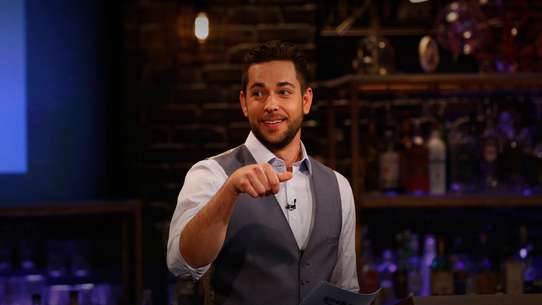 The BEST episodes of Geeks Who Drink

Two teams of self-proclaimed "trivia geeks" battle it out in rapid-fire quizzes that cover topics from pop culture to science fiction. Each team consists of three players – a celebrity team captain and two trivia pros. After three rounds of raucous game-play and (mostly) friendly competition, the winning team will earn bragging rights, a spot on the Geeks Who Drink leader-board and a bevy of prizes to geek out over.

John DiMaggio and team went head to head with David Giuntoli and his merry band of geeks.

Team “Barma Initiative”, led by Mark Pellegrino in a battle of wits against Brett Dalton and the members of “Make It a Double Agent.”

Zach Levi dished out the questions - and the jokes - while teams Ewoking Dead and Slurenity drank. Hilarity ensued and a good time was had by all, per usual.

Felicia Day's team 'Beer me up Scotty' takes on Dexter Darden's 'Maze Rum Runners' in a battle of the Nerd IQ's. The teams go head to head in categories ranging from Shakespeare, condoms to comic books.

Team "Beer the Reaper" challenges their nerd IQ against team "Monty Python and the Holy Ale."

It was a knock 'em out, drag 'em out brawl of the brains in this episode of Geeks Who Drink. Grey Damon and his crew "Whiskey Business" compete against the nerdy might of Josh Brener and team "Down and Nerdy".

It was a battle of the wits as Jonathan Sadowski and team "Light Sobers" went head to head with Lenny Jacobson and the "Ale Storm" crew. Care to take a guess at who won?

It's "Battle Bar Galactica! vs "Weapons of Mass Consumption"!

Joko versus Klaas - The duel for the world

Jeopardy! The Greatest of All Time