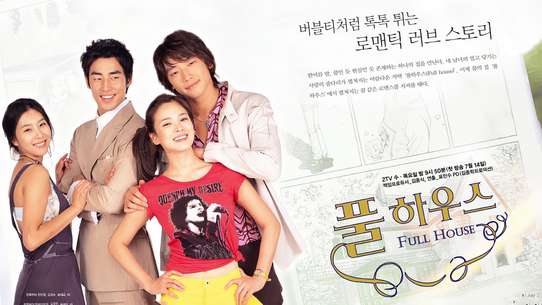 Han Ji-eun is a naive writer who got swindled out of everything she owned including her house by her best friends. Stranded in China, She managed to borrow money from an actor Lee Young-jae to return to Korea. On her return, she found out that her house was bought by Lee Young-jae. In an attempt to get her possessions back, she entered in a contract marriage with Young-jae for one year. In spite of losing all, Ji-eun manages to be cheerful and takes things in strike and the business relationship between the two becomes personal as they start to rely and care for each other.

Young Jae publicly announces his engagement to Ji Eun, and the two must keep up appearances.

Stranded in China from the betrayal of her best friends, Han Ji Eun meets famous actor Lee Young Jae and receives his help.

Min-hyuk finds out that Young-jae's marriage is only by contract. Hye-won tells Min-hyuk she's letting go of him. Young-jae tells Ji-eun she is nobody to him. Min-hyuk decides to take Ji-eun from Young-jae.

Young-jae says sorry for always making Ji-eun wait. He says she is not just a nobody to him. Min-hyuk asks Ji-eun for a chance at her heart. He buys her flowers. Young-jae and Ji-eun revise their contract, the marriage is now to last 3 years. Hye-won tells Young-jae she wants to be with him. Ji-eun asks Young-jae if it is okay to like Min-hyuk.

Ji-eun takes back her appeal for a divorce. Young-jae makes up for how he has treated Ji-eun. He buys her 105 roses. He vows to protect Ji-eun. Hye-won catches Ji-eun kissing Young-jae on the cheek.

When Young Jae buys the house Ji Eun didn't want to sell, the two are forced to make a less-than-desirable solution.

Ji-eun declines Young-jae's proposal. Young-jae goes to great lengths to get Ji-eun back. He finally reveals the depth of his emotions to Ji-eun. Young-jae and Ji-eun return in each other's arms.

Young-jae stops seeing Hye-won to protect her. He tries to prevent Ji-eun from seeing Min-hyuk. Min-hyuk tells Ji-eun he likes her and asks her if she can like him back.

Hye Won is heartbroken and Young Jae comforts her, while Ji Eun gets stood up by Young Jae during dinner.

Young-jae lets Ji-eun see Min-hyuk. He agrees to be with Hye-won after his marriage contract of 3 years. Ji-eun asks for a divorce.

Young-jae says he won't let go of Hye-won's hand until she lets go of his. Ji-eun confronts Hye-won and asks her to leave Young-jae alone and to stop calling him. Hye-won kisses Young-jae. Ji-eun tells Young-jae she is falling in love with him.

Min Hyuk takes Ji Eun out for dinner and hires her as a writer. Young Jae and Ji Eun make a trip to Magic Land were he gives her a gift.

Young-jae tells Ji-eun he'll move out and be with Hye-won. Ji-eun is hurt and accepts an invitation to go to Venice with Min-hyuk. Hye-won realizes Young-jae is in love with Ji-eun and finally sets him free.

Ji-eun tries to talk to Young-jae about their relationship but her efforts are unsuccessful. Young-jae's father finds out Ji-eun married his son for money. He asks her to leave/end the relationship. Grandmother won't forgive Ji-eun. She asks Young-jae for a divorce. She says Young-jae doesn't know how to love/care/protect someone. When Young-jae asks her if Min-hyuk can take care/love her, she says yes. Thinking he has nothing else to offer Ji-eun, Young-jae sets her free and gives her a divorce. Hye-won tells Ji-eun Young-jae is in love with Ji-eun.

Young-jae and Ji-eun visit Ilsan. Ji-eun does The Three Bears number. They play in a park.