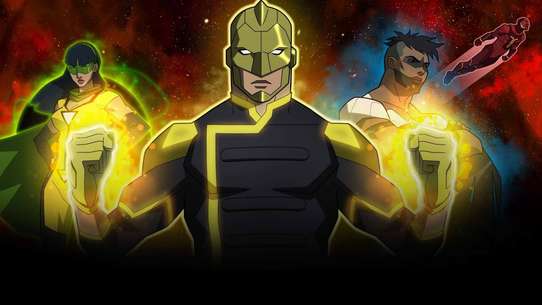 The BEST episodes of Freedom Fighters: The Ray

In a CW Seed prequel to The CW “Crisis on Earth-X” Arrowverse crossover, Ray Terrill is a public interest lawyer who gains light-based powers from his dying Earth-X counterpart and decides to fulfill he predecessor’s mission by joining the Freedom Fighters of the Nazi-occupied Earth-X.

Barry, Cisco, Oliver and Curtis recruit Ray as a crime-fighter. He is thrown into the thick of things when Mari McCabe (a.k.a. Vixen) seeks their assistance in defeating a giant robot attacking Detroit.

Ray finds the strength and willpower to defeat Overgirl. He opts to stay on Earth-X to assist in the fight against the Reichsmen.

Ray, Cisco, Phantom Lady, Black Condor and the Resistance are faced with an attack by Overgirl, Black Arrow, Blitzkrieg and the New Reichsmen.

After being attacked by Overgirl, Ray tells his parents that he has to go away for a while. He comes out to them and they are accepting of his sexuality. Ray has Cisco send him to Earth-X.

Ray proves instrumental in defeating the giant robot. Oliver offers to train him. After he returns home, his house is attacked by Overgirl, who steals the Red Tornado's cerebral cortex from him.

Ray Terrill gets fired from his job while the opportunity of a lifetime breaches in his life.

Ray Terrill tries to make sense of what happened to him and discovers that he now has superpowers.

As The Ray gets wounded trying to save Red Tornado, Vibe intervenes in the fight breaching him to Earth One.

As Ray Terrill proceeds with his superhero antics and personal life, on Earth-X Vibe gets attacked by Overgirl, Blitzkrieg and Black Arrow.

As John helps Ray to understand his superpowers and persuades him to approach Jacob, Team Flash notices the suspicious radioactivity over Tulsa, a result of Ray's powers.

On Earth-X, Ray contacts the Resistance in the ruined New York City. Phantom Lady and Black Condor mistake him for his counterpart from their Earth. Ray offers to help them fight the New Reichsmen and retake the cortex from Overgirl.

In Tulsa of Earth-X a branch of Freedom Fighters consisting of The Ray, Dollman, Phantom Lady, Black Condor and Red Tornado are fighting Schutzstaffel squad led by Overgirl, Black Arrow and Blitzkrieg over lives of ceveral civilians.