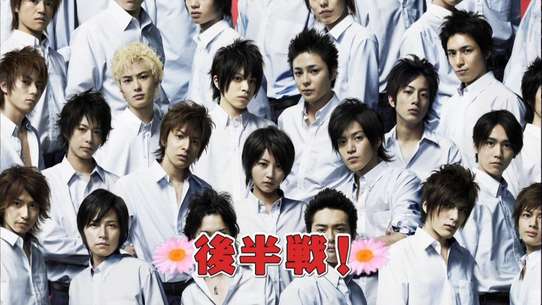 The BEST episodes of For You in Full Blossom

The drama is based on the popular manga of the same name by Nakajo Hisaya, which has already been dramatized in Taiwan. Horikita plays the protagonist Ashiya Mizuki, a Japanese girl in the U.S. who one day sees the young athlete Sano Izumi (Oguri) compete in the high jump on television. She begins to idolize him, and decides to move to Japan to attend the same school as him. However, Izumi goes to an all-boys school, so Mizuki disguises herself as a boy to achieve her dream of being with her idol.

Mizuki, Sano, Nakatsu and Minami do a photo shoot for a popular magazine. The rest of the school do personal interviews. They think the school will close so they try fundraising. Nakatsu tells Sano he likes Mizuki.

The members of dorm 1 move into dorm 2, making 3 per room. Nakatsu arranges to move into Sano and Mizuki's room instead. 10 students from Osaka high have a joint party with 10 from St Blossoms. Sano decides to prepare for the Autumn festival.

#3 - The Beginning of Stormy Love

The 3 dorms must work together in a treasure hunt to form the Sakura Committee. Mizuki's parents visit. Sano gets serious about jumping.

The guy's head to the beach to work at Minami's mother's beach house. There they battle Tokyo high. Sano tries high jump for the first time since quitting.

#5 - Getting into the Forbidden Boys' Dormitory

Mizuki starts at Osaka High School in order to get close to Sano.

The dorms compete in the Mr Osaka contest. Nakatsu develops a crush on Mizuki.

Mizuki's brother comes to Japan to take her back to America. The dorms search for a panty thief. Sano discovers Mizuki's secret.

A new home room teacher arrives and accuses Nakatsu of cheating on a test, causing issues for the class. Nakatsu finds out Mizuki is a girl.

The school finds out Mizuki is a girl. The class does a maid cafe for the school festival. Mizuki leaves the school.

Sano gets ill from exerting himself. The dorms put on a challenge to destroy the relationships of the boys with girlfriends. Mizuki decides to return to America.

The school has a dance with the girls from St. Blossoms.

The 3 dorms compete in a competition, with Sano and Nakatsu trying especially hard. Sano's father ends up in hospital. Sano finally makes his jump.