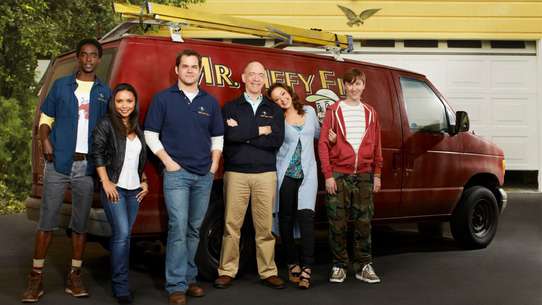 The BEST episodes of Family Tools

Family Tools follows Jack Shea (Kyle Bornheimer) and his bad luck streak When his father Tony (J.K. Simmons) suffers a heart condition, he finds himself taking over the family hardware business, however maintaining his fathers success and proving himself worthy with his father watching his every move proves difficult.

Stitch prepares for her community college graduation, which leads Jack to seek out Darren and Stitch's estranged and elusive mother. Meanwhile, Terry challenges Tony to fix their shower, leading to an all out war between the two of them, while Darren tries to escape a stalker ex-girlfriend.

When Jack is bullied by "the bug guys," Tony offers Jack advice on how to handle them, even though Jack is determined to handle them on his own. Meanwhile Aunt Terry is out to win the local art show.

The tables are turned when Terry comes down with the flu and Tony must take care of her for a change. Meanwhile, when Jack learns that Stitch's new boyfriend is jealous of Stitch's feelings for him, Jack must decide if he should finally take the next step.

Terry thinks Mason needs a strong male role model and, lacking a better option, enlists Jack to step in. Meanwhile Tony, Darren and Stitch buy Ellis a new wheelchair and trick it out, which seems like a good idea at the time, until Ellis takes off.

In the series' final episode, when Terry impresses a client with design advice, she and Jack decide to expand the family business with "Designs By Terry." When the design business starts taking over Mr. Jiffy Fix, both Jack and Darren look for a way to separate the businesses, and it's up to Tony to get Terry and Jack talking again. Meanwhile, Mason becomes CPR certified and wants nothing more than to save a life.

After being off the market for years, Tony strikes up a romance only to have Jack discover that his new girlfriend is two-timing him. Meanwhile, Mason is frustrated with Aunt Terry for not letting him drive, so he seeks help from Darren, and Stitch alludes to a secret crush.

When Jack lands a big job in the affluent Beachwood neighborhood, Tony second guesses Jack's decisions and can't stop interfering. Meanwhile, Terry is getting Tony ready for his physical, and Darren keeps leaving Ellis with Stitch.

When Jack and Darren get locked in a room at a client's house, their bickering reveals the underlying reasons for their continuous conflict. At home, Jack and Darren's unexplained absence has a ripple effect on Terry, Tony, Mason and Stitch as they prepare for the annual Mapleport Classic Car Parade.

Mixing family with business is never easy, and Jack Shea is about to learn that lesson the hard way. When Jack's father, Tony, has a heart attack and is forced to hand over the keys to his beloved handyman business, Jack's eager to finally step up and make his father proud. Unfortunately Jack's past career efforts have been less than stellar, so everyone seems to be waiting for him to fail. His new job isn't made any easier by Tony's rebellious, troublemaking assistant, Darren, and Darren's flirtatious sister, Stitch, who works at the local hardware store. But with the support of his Aunt Terry and his oddball yet endearing cousin Mason, Jack Shea may just find his true calling right at home.

When Jack and Darren take a job in a corporate office, Jack tries to reconnect with a former high school crush, while Darren questions his status after one of his ideas is stolen. Meanwhile, Terry meddles in Mason's new relationship and Tony is uncomfortable with the girlfriend's unconventional style.