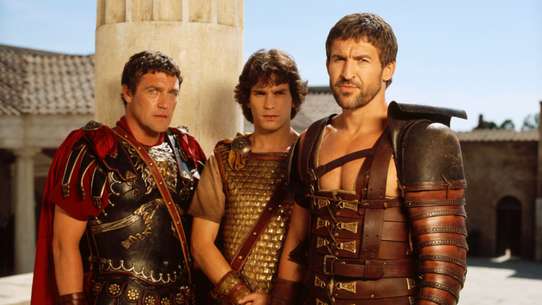 Epic four-hour series about the rise of Octavius who succeeds Julius Caesar and tangles with Marc Anthony for control of the Roman empire and finally went on to become the emperor Augustus.

Camane, the beautiful Vestal Virgin, saves Octavius' life after he is bitten by a poisonous snake. When Marc Antony's soldiers arrive suddenly to assassinate Octavius, Camane puts herself in harm's way so the young Emperor can escape and hopefully claim his throne.

Marc Antony addresses the crowd at Caesar's funeral, where a shroud hides the deceased leader's stab wounds. Octavius' mother, Atia, recently imprisoned by Cassius, is allowed to speak at Caesar's funeral, but she tells the wild crowd that her son is Caesar's true heir. Meanwhile Camane, the psychic vestal virgin, has put her own life at risk by guarding the will, and Tyrannus, fearing for Octavius' life, once again takes the young heir away from the turbulence of Rome.

Caesar watches as the slave and gladiator, Tyrannus, slaughters his competitors, unaware that Cassius and Brutus -- Caesar's ""friends"" -- plan to assassinate him shortly, an event foretold by the psychic vestal virgin, Camane. After the assassination, Caesar's murderers seek to take over the empire, but standing in their way is a will naming Caesar's nephew, Octavius, as heir. Keeping a promise made to Caesar, Tyrannus spirits Octavius away from those who now want him dead.

Octavius relinquishes the beautiful Vestal Virgin, Camane, so that he can devote himself to being the Emperor of Rome. Tyrannus, the former slave and gladiator, joins Octavius' forces in their fight against the power-hungry Marc Antony, with the fate of Rome and the western world hanging in the balance.

Though Octavius believes they are safe at Marc Antony's villa, Tyrannus doesn't trust his host and, after arguing with both Octavius and Antony, he leaves the villa. It turns out that Tyrannus had good reason to distrust the ambitious Antony, who arranges to have Octavius bitten by a poisonous snake and leaves him to die.

Camane posts signs around Rome claiming that Octavius is Caesar's rightful heir. Under Tyrannus's protection Octavius is on the run because Cassius wishes him dead. The two are captured by mercenaries and put into a gladiator's prison where they will face certain death if their true identities are revealed.