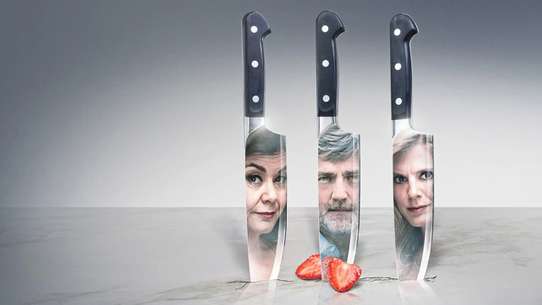 The BEST episodes of Delicious

Every episode of Delicious ever, ranked from best to worst by thousands of votes from fans of the show. The best episodes of Delicious!

Gina was once married to Leo Vincent, a successful entrepreneur, chef and hotel owner in Cornwall. Leo owes much of his success to Gina’s exceptional cooking, but since leaving her for the glamorous Sam, his business has continued to thrive. When Sam has suspicions that Leo is having an affair she confides in Gina, confident that she’ll recognise the signs. Only to later discover that it’s Gina herself who is the ‘other woman’. The secrets and scandals that spill out are proof that sleeping with another woman’s husband is never a good idea - even if he was your husband first. As Sam and Gina try to fix their broken families, will a friendship rise from the ashes of betrayal or will they tear each other apart?

Sam and Gina tell the family the truth about Adam, Michael and Teresa confront how they feel about each other and Gina embraces a future with James.

Teresa comes clean to Sam, a bewildered Gina struggles with her feelings for Mason and as the family pulls together for Mimi, tragedy strikes elsewhere. Last in the series.

A vengeful Gina sets out to give Sam a 40th birthday she will never forget. But Sam is not the only one in for a surprise. Drama, starring Dawn French and Emilia Fox.

Gina confronts Rosa for helping Teresa get an abortion without informing her and reaches breaking point after a heated altercation, telling her the wedding at the Penrose is cancelled. Elsewhere, Michael and Tina have some serious doubts about their burgeoning relationship.

A mysterious man from Gina and Leo's past threatens to expose a secret, while the real reason for the failure of the couple's marriage is revealed. Meanwhile, Sam grows concerned about Michael and Teresa's relationship and decides to confronts them.

Everyone gathers for a feast to mark the first anniversary of Leo's death, but passions soon boil over. A member of staff reveals a long-kept secret that shocks Gina to the core.

As friends and family members gather for the funeral, emotions run high and one or two relationships take a new turn. Plus, the will reveals a few surprises.

Business is booming at the Penrose a year after Leo's death, but there is trouble in store for the two women running things. Gina is left reeling when two men from her past reappear - one welcome, one not at all - while a frustrated Sam decides to show initiative personally and professionally, with potentially disastrous consequences.

Sam and Gina come to blows over the best way to help Mimi, but when it comes to dealing with Mason they agree there is only one course of action - revenge.

Gina and Sam have just about found a way to work together. But a new man is about to really stir things up.

Gina was once married to Leo, a successful entrepreneur, chef and hotel owner in Cornwall who owes much of his success to her exceptional cooking, but left her for the glamorous Sam. When she has suspicions that Leo is having an affair she confides in Gina, but the secrets and scandals that spill out pit the two women against each other.

Sam and Gina discover Mason is up to something threatening everything they have worked for, while Teresa comes clean to the family but it remains to be seen if Mimi does the same.