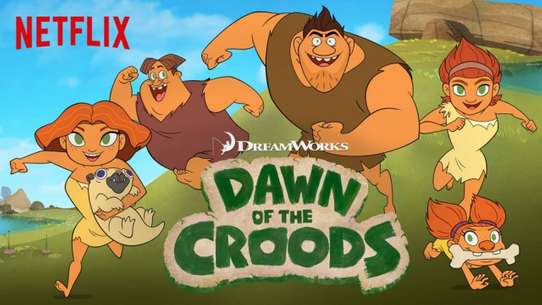 The BEST episodes of Dawn of the Croods

The world's first family is back for more laughs as they discover sports, sleepovers and other wonders in a world of exotic creatures and adventures. This 2D animated cartoon is based on the 3D animated feature film, "The Croods".

When Meep kicks Snoot out for his cowardliness, he bunks with the Croods, who are less than thrilled at having him.

Ugga joins the "nitting" club, but has trouble fitting in.

Fed up with being ignored, Gran fakes her own death and haunts her family, but the Croods are anything but intimidated at this.

#4 - The Grugest Story Ever Told

Eep finds a mysterious pen pal to share her feelings with.

A sugar rush overtakes the Croods when the get a craving for honey from a beehive.

Eep and Thunk discover an underground treasure of golden eggs and greed begins to overtake them.

Without asking the other residents, Grug makes a peace deal with the Broods.

When Ugga gets cranky, Eep and Thunk decide to surprise her to cure her of her bad mood.

When Munk reports his family missing, Grug takes it upon himself as valley leader to find them.

After snobby neighbors move in next door and complain about a bone pile blocking their backyard view, the Croods start the first prank war ever.

While giving a lesson on self-reliance, Grug suffers a mishap that tests his will to survive.

Grug struggles to do 'math', which is now a method of hunting, with Sqwak's help.

When Eep becomes a veg-a-eat-ian, the family hunts for the biggest veggies they can find -- until something makes them go back to eating meat.

Grug helps Munk get his job back with an IQ-boosting worm.

Grug starts a fight with the moon.

To help get all the valley's work done, Grug pairs up every adult with a child trainee.

Eep falls for a handsome new teenager at her school.

Eep goes through hallucinations to capture a 'Night Mare' in order to look good in front of her class.

Grug won't let Eep join his winning team, so she forms her own group to play in history's first sports event.

Thunk befriends a group of Liyotes, but the Croods try to convince him that they only want food.

While Grug has his first day as leader of Ahhh! Valley, a new family pet makes Sandy jealous.

Eep loves to compete, so she teams up with her new friend Lerk and plans to win a school hunting exam, no matter what she has to do.

Grug takes Ugga out to practice her hunting skills, but there are some kinds of animals that she just can't seem to catch.

A plan to get revenge against the Broods backfires.