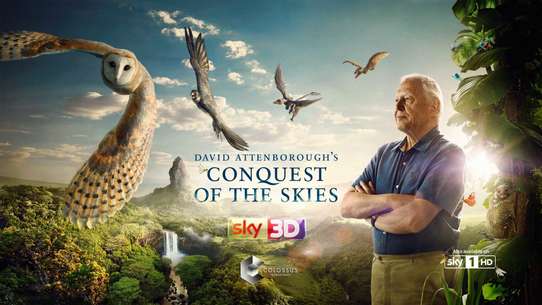 The BEST episodes of David Attenborough's Conquest of the Skies

David Attenborough embarks on an extraordinary journey to search for the origins of animal flight, beginning his epic global exploration in the unexpectedly skilful world of the flying insects, through to the evolution of birds from their flying dinosaur ancestors..

The episode begins with David Attenborough explaining how insects had the skies to themselves for millions of years - when a pterosaur suddenly arrives on the scene and eats a dragonfly. David Attenborough tells the viewers that the pterosaur's name is Dimorphodon. He travels back in time and watches the pterosaurs evolve into truly humongous behemoths like the late Quetzalcoatlus. Some pterosaurs even sported colourful crests that could have been used to attract mates. However, the pterosaurs had to share the skies with some remarkable flying dinosaurs like Microraptor. From these feathered flyers evolved the birds, who survived the K-Pg mass extinction. Some, like the swans, could gracefully fly at 30mph as David Attenborough shows when he tracks their progress on a boat. But then the mammals managed to lift themselves up, like the nocturnal bats. The battle between the birds and the bats for aerial supremacy soon began, and David Attenborough says that in the concluding episode, he will study the Aerodynamic War.

The episode starts with David Attenborough talking about dragonflies and how the first flyers evolved. Then he goes to the Jungles of Borneo where he witnesses how stag beetles take to the air. Finally, he travels to London where some bluebottle flies feast on his dinner. He explains how the everyday fly can turn and twist in a dazzling show of aerodynamics.

The concluding episode to David Attenborough's hit 3D documentary starts with the famous naturalist watching some vultures soar around a Spanish gorge. He then travels to Rome, where he sees peregrine falcons hunt starling flocks. After that, he journeys to Ecuador, where he studies some hummingbirds as they abnormally hover over some flowers. His voyage soon takes him back to England, where he looks on as barn owls hunt mice in the cornfields. Finally, he ends his epic adventure in Borneo, as he is caught in a bird/bat/insect crossfire. He survives to recap on the history of flight, with the insects taking to the air around 300 million years ago, before the reptilian pterosaurs arrive and grow to gigantic sizes. Then, a branch of the dinosaurs becomes the legendary Microraptor, who dominates the Chinese forests. These feathered dragons led to the arrival of the birds, who went on to become the aerodynamic kings. However, the bats came to battle the birds and soon a three-way aerodynamic war existed. David Attenborough finishes his show by stating that this aerodynamic war still goes on today. The series ends as he slowly walks away on a rope bridge.