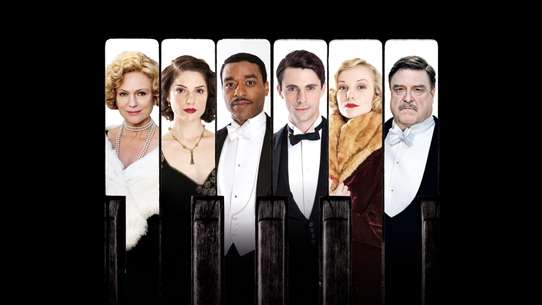 The BEST episodes of Dancing on the Edge

This five-part series follows the Louis Lester Band as they find fame amongst the parties and performances of upper class society in the capital. Initially shocked by black musicians performing in polite society, many recoil but London's progressive socialites take the band under their wing.

Louis is introduced to wealthy recluse Lady Lavinia Cremone, who arranges for the band to play in front of Prince George and invites a producer from the BBC and a record company executive. Singer Jessie is flattered when she attracts the attention of aristocrat Julian Luscombe, who takes her out for a spin in his new car and promises to introduce her to a Hollywood film producer.

Music journalist Stanley Mitchell decides to take a gamble and signs Louis Lester and his group, booking them to play at the Imperial Hotel in front of a mainly elderly audience who have never seen black musicians before, and many of whom depart in outrage. However, they do intrigue and impress a group of socialites and are invited to play at a private party - where Prince George flirts with singers Jessie and Carla - and catch the attention of wealthy businessman Mr Masterson.

Stanley makes plans to help Louis leave the country but finds his efforts hindered when Masterson announces he is offering a substantial reward for the fugitive's capture. As the band reunites to make a getaway, Louis reveals he no longer trusts Sarah when she tries to contact him, while Julian's erratic behaviour becomes even more of a concern as he and Masterson prepare to journey to America.

The band plays at a dinner at the Imperial Hotel, during which Louis discovers that one of Julian's fellow Freemasons provided him with an alibi for the night Jessie was attacked. Masterson acquires Music Express magazine with Lady Cremone's assistance, and makes Stanley the editor-in-chief.

Louis is interviewed by police about events on the night of Jessie's attack, telling them he saw Julian when he should have been on a train to Paris. The band are unsettled when a table of racist Germans walks out during a performance at the Imperial Hotel's Christmas Lunch, but Stanley later engineers a fitting revenge. Lady Cremone host a New Year's Eve party on her estate and everybody is surprised when Julian turns up, announcing he has been in France exploring a new business idea.