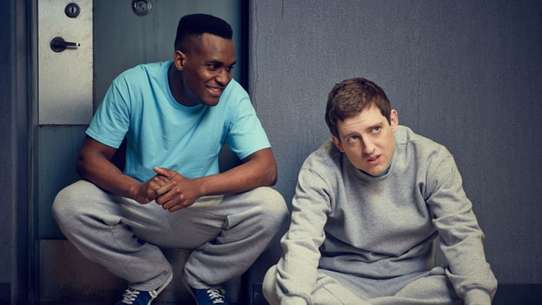 The BEST episodes of Crims

Every episode of Crims ever, ranked from best to worst by thousands of votes from fans of the show. The best episodes of Crims!

Crims follows straight-laced Luke and Jason. Luke inadvertently finds himself sentenced to two years in Young Offender Institution Sunnybank View after becoming a bank robber's getaway driver, along with the bank robber in question, his girlfriend's brother and so-called friend - Jason. To make matters worse he has to share a cell with Jason. Luke will have to rely on Jason's street smarts to get him through. Unfortunately, Jason is a massive idiot. On hand to keep a watchful eye on the boys as prison officer Dawn, alongside her unsettling colleague Creg.

Sunnybank View turns from Broadmoor to Broadway when the inmates put on a musical for friends and family.

Luke decides to propose to Gemma in an attempt to send her new friend Roger a clear message. However, he must first try to get her parents' permission. Meanwhile, Isaac struggles to give up snitching.

Luke attempts to impress his girlfriend by enrolling on an A-level course, but neither the subject nor the teacher turn out to be what he was expecting. Meanwhile, Marcel begins to think Luke has been trying to get out of reading him the Twilight Saga.

A prisoner escapes. Creg is first in the firing line when no-nonsense Prison Governor Riley decides to get to the bottom of the disappearance.

Marcel and Daz are furious after Dawn's clampdown on drugs, so in an attempt to boost Luke's popularity, Jason volunteers him for a drugs snatch from the warden's office.