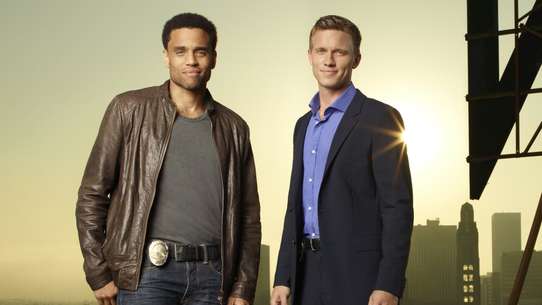 Common Law centers on Travis Marks (Ealy) and Wes Mitchell (Kole), two cops with a problem... each other. Wes, a methodical former lawyer with a passion for cars, gardening and his ex-wife, and Travis, a maverick ladies' man who served time in juvenile hall, can't stand each other. As partners, they were LAPD's dream team on the homicide squad but constant bickering got in the way of their work and the two ended up on probation. To revive their flagging professional relationship, their Captain (McGee) sends them to couples therapy to help understand and resolve their conflicts. We soon learn that a successful relationship or partnership doesn't mean you have to like the same things; you just have to hate the same things.

While investigating a murder, Wes and Travis are given an assignment by their counselor. In an effort to get them to learn more about each other, she wants them to view the world through the others' eyes by role playing.

After being kicked out of Dr. Ryan's group, Wes and Travis make a deal with their eccentric new therapist to get them out of counseling for good. But when a run-in with the members of the Special Investigations Section leads Travis to blow his top, the detectives realize that they don't just need to go back to therapy-they need Dr. Ryan. Chastened, the duo offers to tell Dr. Ryan the story of how they ended up in counseling in the first place if she'll take them back.

The guys investigate a series of home invasions by a group of thieves and learn that Travis' foster brother could be their leader.

When Wes and Travis delve into the world of online dating to solve the murder of a thirty year-old woman named Darby Jensen, Wes finds more than he bargains for when he discovers his ex-wife uses the dating site as well.

When their mentors are called in, Wes and Travis see each other differently.

Wes and Travis investigate a cop's shooting and take care of the injured officer's police dog.

In the pilot of new USA series Common Law, Travis Marks (Michael Ealy) and Wes Mitchell (Warren Kole) two of L.A.P.D's finest within the Robbery-Homicide Division have a sever year track record of being the best. However their constant disagreements and bickering is having an impact on their work, leading their Captain (Jack McGee) to take a new approach by sending them to couples counseling with tough-as-nails therapist Dr. Emma Ryan (Sonya Walger) to work through their issues and strengthen their partnership and bond.

Wes and Travis share quarters during a stakeout to monitor the moves of a crime novelist, who may have helped a criminal escape prison.

The guys' work suffers when they feel pressured to reach an important milestone during the hunt for a pair of criminals emulating Bonnie and Clyde.

Travis' ex-partner causes tension between the guys when they receive a special assignment to stop a crime ring responsible for stealing high-end vehicles.

Wes and Travis are forced to bring Dr. Ryan along for the ride as they investigate the death of a woman who fell from the balcony of her honeymoon suite.

Wes confides in Travis about dreams he's had about Dr. Ryan, which turns out to be a mistake. Elsewhere, Dr. Ryan's fiancé may be withholding information about a body found at his construction site.