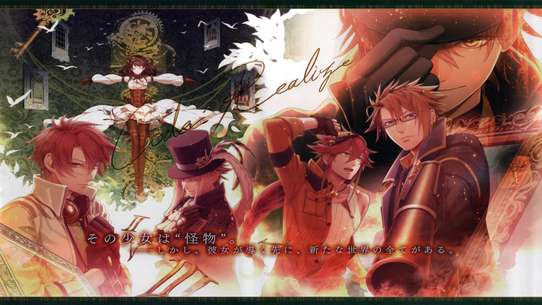 The BEST episodes of Code: Realize − Guardian of Rebirth

Cardia has a deadly poison residing in her body, and as a result, gets called a monster by others. One night, she meets a mysterious man calling himself Arsène Lupin, who leads her to Industrial London. From there, she meets various people uncovering the truths and real stories behind the strange people and land, in an attempt to recover her memories and search for her father who holds the keys to her memories in London.

Cardia is absorbed by the celestial sphere, and while inside it, she sees her father's memories. Among them is the event in their past that pushed him over the edge into madness.

Finis has taken over London through a coup d'état as he moves forward with the Code: Realize plan. Meanwhile, Saint appears before Cardia and identifies himself as a member of Idea.

The British Army marches on St. Paul's Cathedral, Twilight's base. As a diversionary force, Lupin and the others have infiltrated the cathedral, but waiting inside is Aleister, Van's former superior.

Van and the rest are searching for Cardia in London when an explosion suddenly breaks out. Isaac's terrorist plot has begun. A coup d'état also begins from within the British Army, endangering Queen Victoria.

A thief known as the "phantom thief under the moon" has been appearing all over London, going after treasures of vampire households and nothing else. The fact that the case involves vampires stirs Van into action. Lupin proposes a daring plan to capture Finis, and it involves stealing the entire train that Finis is riding in. Cardia wants to help, so each of the others gives her training in their respective areas of expertise, and they set out to capture the "phantom thief under the moon" as a finishing touch...

Cardia has been captured aboard the Nautilus. Lupin and the others want to help her, but they're helpless in the face of the massive flying fortress. Lupin tries to board it himself, but Van stops him, reminding him that he's injured.

A mafia-sponsored airship race is being held, and first prize is the posthumous writings of Isaac Beckford. Lupin and the others believe the writings might give them some clues about Isaac, so they enter the race.

Cardia, a young woman who harbors a deadly poison in her entire body, has lived her life confined in a mansion alone, feared by others as a monster.

#9 - Forgiveness for the Past

After learning that she's a homonculus, Cardia runs away from the mansion without telling Lupin and the others.

Lupin and his companions have been using the mansion of a noble named Saint-Germain as their hideout. When Cardia meets Saint, he makes a comment that seems to carry a deeper, hidden meaning.

Lupin and the rest move forward with the plan to capture the train Finis is riding. Lupin and Cardia board the train in disguise, and all seems to go as planned... until a man appears before Lupin.

Thanks to Finis, Lupin and the others are on the wanted list after the train explosion, making their search in London for information on Isaac difficult. Fran shuts himself up in his lab, making Cardia worry.