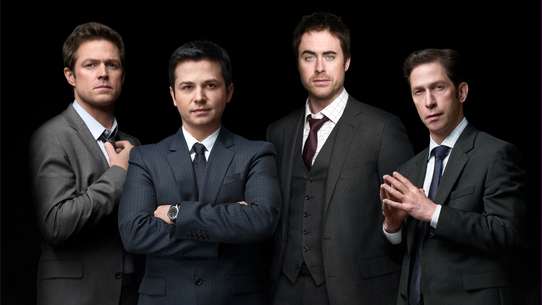 The BEST episodes of CHAOS

Every episode of CHAOS ever, ranked from best to worst by thousands of votes from fans of the show. The best episodes of CHAOS!

CHAOS is a comedic drama about a group of rogue CIA spies in the Clandestine Administration and Oversight Services (CHAOS), who combat threats to national security amidst bureaucratic gridlock, rampant incompetence and political infighting. The team tackles high risk foreign intelligence missions using manipulation, deception and wit to succeed. Rick Martinez was dismayed when his dream job as a spy was eliminated on his first day. However, CIA Deputy Director H.J. Higgins, a calculating mastermind and the head of CHAOS, recognizes Rick's unique skill set and places him as an unwitting mole inside the department. Martinez joins the team under Michael Dorset, a psychologist turned CIA operative and a tactical genius motivated by pure paranoia. Working with Martinez is Scottish-born Billy Collins, de-commissioned from the British Secret Service and deported from the United Kingdom; Casey Malick, a 12 year veteran of the agency with an understated demeanor and the ability to transform into a "human weapon." While Martinez's instincts on who he can trust are constantly tested, he may have a worthy confidant in the new Deputy Director, Adele Ferrer, who seems to have his best interests at heart. Or should he rely on officer Fay Carson, an alluring agent and an expert at deciphering people's "tells?" Attacking each assignment with unparalleled confidence and gusto, these operatives perform covert operations, exert political influence and eradicate all manner of evil - and that's just to survive the morning staff meeting.

While in Germany to take down a rogue spy, the agents find a very different scenario which requires their expertise.

When a North Korean diplomat embarrasses himself in front of the UN, Rick agrees to have the CIA orchestrate his defection. But when he demands that they also smuggle his family out of the Communist country, the Chaos agents pose as anti-capitalism entrants in the Pyongyang Film Festival to accomplish the mission.

A former team member who was thought to be dead is actually being held hostage in Panama. Risking their careers and lives, the ODS head out, on another rogue mission, to bring him back.

A legendary retired agent is called upon by the ODS to help them investigate a private security contractor. It seems the contractor is trying to infiltrate US embassies with "spies" of their own.

Complications and distractions abound when the CHAOS agents infiltrate an arms dealer’s Russian compound with the intent to capture him. Posing as lawyers, the agents must put their improv skills to work.

After his new job at the CIA is cut on day one, Rick Martinez is enlisted by the CIA Deputy Director to be a mole in a team of unruly agents that he would love to fire. But, when the agents end up getting dirt on Rick, he's forced to play by their rules

The agents travel to Russia to track a scientist who is selling nuclear weapons. They pose as tourists who are searching for brides, but when one woman falls for Rick their romance threatens to blow his cover story.

The team must continue their search for a terrorist in Paris covertly after French intelligence shuts their mission down.

The CHAOS agents head to the Middle East to influence a dictator's choice in naming his successor. With the current dictator on his deathbed, their goal is to keep his violent son from assuming power.

The CIA offices go on lockdown when the director suspects a mole, putting a foreign operative in danger. The agents' must figure out how to get the operative the support needed for a drug cartel operation already in play.

The ODS's latest unauthorized activities puts Rick in a dilemma about whether to report their activities to the director.

The agents' latest job is to protect a European political leader after she fakes her death.

Casey is thrown off his game when the agents are sent to China to extricate a compromised spy who happens to be his former flame and partner, Linda. When she reveals that she's on the trail of a major terrorist, the team decides to stay and finish the job.