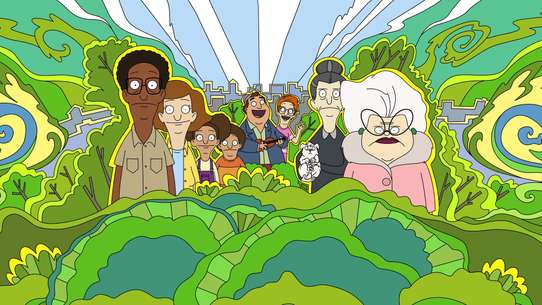 The BEST episodes of Central Park

Owen Tillerman and his family live an unconventional life in New York's bustling Central Park, which Owen manages; now, they'll have to fend off a wealthy hotel heiress who wants to turn the park into condos.

The Brandenham is robbed by a jewel thief, reminding Bitsy of a criminal who terrorized the hotel over 50 years ago.

Season finale. Owen and his family search for a snakehead fish that might be in the Harlem Meer. Bitsy works with a likability consultant.

Owen and the kids go all out for Paige on Mother’s Day. Bitsy has to handle things on her own when Helen takes a day off.

Birdieʼs job is threatened by a rival busker, Bitsy hosts a wedding, and Paige spends the night at The Brandenham.

Owen and Paige set out to buy tickets to a K-pop boy band’s concert for the kids. Bitsy looks into cloning her dog.

Paige hunts a rat, Owen battles trash in the park, and Molly obsesses over her disastrous first kiss.

Bitsy and Helen get stranded during a blizzard. The family finds out that the deal to sell Central Park is happening today.

#9 - Of Course You Realize This Means Ward

Owen oversees a kids' field trip in the park, while Molly and Cole help Brendan with his indoor kite competition. Bitsy and her brother write memoirs.

Cole and Owen do a Squavenger Hunt in Central Park. Paige discovers Molly is a great chess player.

When Molly needs a new bra, Owen takes her shopping. Helen finds a key that could finally reveal whether she's in Bitsy’s will.

Molly and Cole go on a special park tour as Owen and Paige try to have a date night.

Molly introduces Brendan to the family. Helen stumbles upon a new way to get Shampagne out of her life.

Owen grapples with a graffiti artist tagging the park, while Helen plots

Owen’s “I Heart the Park” campaign is in full swing with all hands on deck. Bitsy schemes to cement her political influence.

When Owen considers a new job in Connecticut, the family uses Cole’s toys to imagine what their lives would be like if they moved out of the park.

A tristate blackout leaves Bitsy and Helen trapped in New Jersey—and forces the Tillerman family to see each other in a new light.

On the day of the Lunar Palaver—a big Squirrel Quarrels event—Cole has a run-in with a racist lady in the park.

After an embarrassing moment at school, Cole wants to change his name and identity. Owen, Paige, and Molly tell stories to help him cope.

Molly hosts her first teenage slumber party, which creates a rift between her and Paige.

Owen is called to the Brandenham to help Bitsy deal with a swarm of bees, while Paige and the kids attempt to care for her boss’s cat.

Cole finds an escape from his homework in model sail-boating. Molly becomes a published artist in the school newspaper but isn’t proud of her work.

An event goes awry in the New York park, which Owen manages and lives in with his family. Paige chases a hard news story.