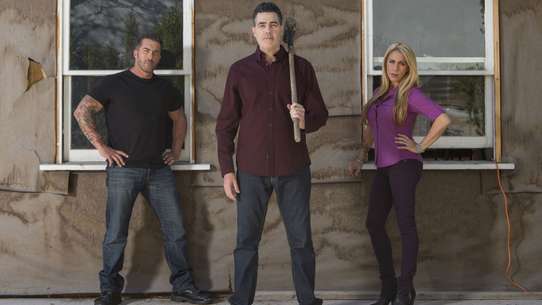 The BEST episodes of Catch a Contractor

Each year, millions of Americans set out to renovate their property in hopes of finally achieving their dream home. Sadly, thousands of these unsuspecting homeowners instead become victims, duped and abandoned by the contractors they trusted their savings to and left with either unfinished or danger-laden, uninhabitable homes due to poor craftsmanship. Host and master carpenter Adam Carolla and his team, consisting of no-nonsense, expert contractor Skip Bedell and his wife, private investigator Alison Bedell, are on a mission to track down these shady, evasive contractors and drag them back to the scene of the crime to face the music and fix the disasters they left behind. Eleven half-hour episodes of "Catch A Contractor" debut starting Sunday, March 9 at 10PM ET/PT with two back-to-back new episodes on Spike TV. Home improvement scams have consistently ranked in the Better Business Bureau's top 10 consumer cons. Carolla, who spent 10 years working in construction before his successful career in radio and television, takes this issue very personally. As a passionate master carpenter who has built hundreds of homes including his own, he not only has a keen eye when it comes to identifying shoddy, inferior work, but loathes seeing trusting and naïve average citizens getting scammed by subpar contractors and left holding the proverbial bag.

The Goodes wanted a 1/2 bath, laundry room and chicken coop for Cluck Norris and his hen friends. Carolla and Skip wade thru a pile of excuses and backyard full of chicken poop to confront contractor Manny.

Adam & Skip are shocked to discover that the worst carpenter they’ve ever busted is back at it again! But after betraying his fellow former marine, this hack gets payback when angry words explode into an all out brawl.

A couple needed to build a deck to expand their tiny home and a retaining wall to keep the house from sliding down the hill. Instead, they got a part-time stripper and a fulltime liar who’s horrible work is ready to collapse!

Adam and Skip go after one of the most deceitful contractors ever. After adopting 4 kids, a family trusted a high school friend to expand their kitchen, but he took their money, their appliances, and their trust.

#6 - Going Out in a Blaze of Flooring

Kathy hired contractor Randy to update her condo. He left her with appliances in the living room, a dangerous fireplace and hundreds of excuses. What happens when Adam & Skip confront Randy and his lies?

A family must sleep on the living room floor after shifty contractor Jose ripped their home apart and split. Can Adam Carolla and Skip drag Jose back to the scene of the crime to fix his mess?

A family escapes their war-torn country only to have an “expert” contractor turn their home into a combat zone. Cooking in a tent & living in one room, the family needs Adam & Skip to do battle with their absent expert.

Preppy contractor Jeff converted a structurally sound home into a dangerous death trap when he removed a load bearing wall. Can Adam and Skip get him back to secure the house before it collapses?

Open sewer pipes and insect infestations caused by shoddy contractor Avi are now making the homeowners sick. Can Adam Carolla and Skip hunt him down and force him to fix the disaster he created?

Vance told grieving widow Valerie that he was a contractor. He said he would build a stabile art studio for her, but all of his shoddy work needs to be re-done, and he’s been dodging Valerie for months. Will Vance do the same to Adam and Skip?

After ruining a young couple's yard and their plans to start a family, contractor Ray proves hard to catch. Skip and Adam try to bring Ray back to the job!

Adam & Skip hunt for a reckless contractor that left the Rodriguez family’s four small kids in danger from sharp metal rebar, upturned stakes that look like booby traps, and a 20’ drop with no safety fence!

A family’s plans for a dream backyard turns into a construction nightmare after their contractor flees the job. All hell breaks loose just as the shady contractor is in their sight.

A Los Angeles home is abandoned, leaving its homeowners and 15 month old baby in perpetual danger. But this ambush takes a twist when Adam Carolla and Skip discover the real truth.

Shady contractor Pedro claimed to be a jack-of-all-trades, but instead he jacked up everything he touched. Will his hack job prevail or can Carolla and Skip bring justice to the family he screwed over?

Unlicensed contractor Myron, turned his former neighbors kitchen into a dangerous fire hazard. Will Adam Carolla and Skip get him to man up, face the family and fix his mistakes?

A couple whose condo was left in shambles by their friend-turned-builder gets some help from Adam and Skip.

Adam & Skip repeatedly chase a pair of contracting brothers while trying to help a single father complete the ultimate man cave. The disastrous work gets exposed when the angry contractor starts punching through walls!

After spending almost 100K, a family is left with no roof & no hope. When their contractor breaks his promise to return, the team starts an all out manhunt to catch this AWOL contractor before he flees to Mexico.

A contractor fails to finish a family's roof, forcing them out of their home; Adam and Skip try to get the contractor to return and do it right.

A couple seeks justice after being swindled by a builder hired to help rebuild their fire-damaged home.

A single mom & her daughter are left unsafe after a contractor exposes their home to a dangerous alley and then takes off. Will Adam & Skip be able to track him down when he changes his name, and flees to Mexico?

A woman renovates her home so she can care for her ailing father, but hires two contractors that run away with her $57,000 and leave behind a disaster. Things explode when confronting the contractors.

A family is torn apart after their contractor rips out two bathrooms and flees with the money. Adam and Skip try to track down a mystery individual who may be able to bring the contractor to justice and mend the family.