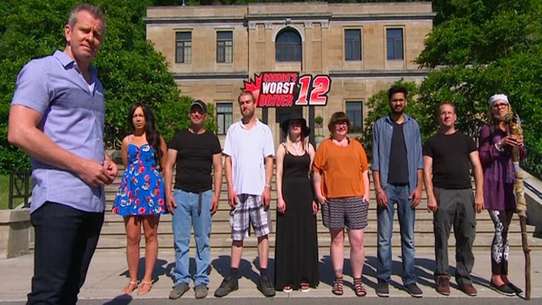 Canada's Worst Driver is a reality show created by the people at Discovery Canada. 8 people nominated by friends and family go to the Drivers' Rehabilitation Center and are taken through various tests. The tests include braking, nighttime driving, country driving, and cornering, among other things. At the end of each episode, somebody is graduated and goes back home. The last person remaining is dubbed Canada's Worst Driver.

This special episode follows each driver's personal journey in rehab – from the first drive to the Driver's Rehabilitation Centre to the rush-hour road finale in downtown Toronto - we also look back at the breakthroughs and breakdowns that made the drivers' experiences so unforgettable.

In an episode devoted entirely to smooth turning, the first order of business for our 5 remaining drivers is a lesson in the dangers of distracted driving.

Today, the remaining drivers have to get behind the wheel of a pickup truck and maneuver through an obstacle course.

The final three drivers in the Drivers Rehabilitation Center are taken for their final test: the roads of Ontario.

This final episode of crashes, crunches and outright destruction determines who's unfit to get their car keys back; one unlucky driver is named Canada's Worst Driver.

Our new candidates to Canada's worst driver title have to face challenges involving parallel parking, lane control, and reversing. Has anyone improved enough to graduate from the Driver's Rehabilitation Centre?

With only 4 drivers remaining, the pressure is on to impress the expert panel. Our abysmal drivers begin this episode by attempting the Three Point Turn Challenge. This should be easy as 1- 2- 3... but remember we are dealing with Canada's Worst Drivers.

Our six remaining drivers still stuck in rehab get thrown in the deep end in this episode dedicated entirely to driving stick.

The final three drivers take everything they have learned and tackle the MEGA Challenge, then complete the final city drive; the expert panel names Canadas Worst Driver.

The four remaining abysmal driving begin this episode by attempting to complete a 180 degree Handbrake Turn. Then, our final four try to manoeuver they're way through the tight corners of the Cross. Finally, our driver's put the pedal to the metal and steer their way through the 70km/h slalom - in a Limousine.

With Santana Pike being named the second graduate, six nominees remain at the Centre. The nominees' first challenge is to test if they know how fast they are driving by covering their speedometer. They are required to drive at both 50kph and 70kph, the latter which also entails them hitting on their brakes at a given point to avoid hitting a wall, which they should be able to do if they are indeed driving at the requested speed. Their second challenge is the annual water tank challenge, which includes a straightaway acceleration and deceleration section, a forward precision ...

With the title of Canada's Worst Driver looming, the three remaining motorists begin by riding in a car together as each one attempts to reverse in a simple line. Later, our drivers are determined to show everyone what they've learned at rehab. Using all the knowledge they've acquired, they attempt this year's Mega Challenge. Finally, our remaining three tackle a public drive through the busy downtown core of Hamilton, Ontario. As the drivers wait with anticipation, the experts make their final decisions. One driver graduates and the title of Canada's Worst Driver is finally crowned.

For the past nine seasons host Andrew Younghusband has tackled the hazards of winter driving, adapted high-performance tips from the racetrack, and manouvered through big city gridlock. And now, for Season 10, CANADA’S WORST DRIVER contends with the most rampant challenge on the roads today: Distracted driving.

The remaining 6 drivers begin this episode by attempting to get turned around in the tightly designed 3 point turn challenge. Then, our returning drivers try driving a pickup truck but they quickly realize the challenge involves manoeuvering with an RV trailer in tow. Finally, our abysmal six are looking where they want to go and are headed to the infamous eye of the needle challenge. It's anybody's guess at this point as to who ultimately will be named Canada's Worst Driver Ever.

Three drivers remain at the Rehab Centre. They begin by all climbing into our limousine and performing a forward slalom with each driver taking a turn behind the wheel. Then, the remaining three attempt to demonstrate that this second time at the Rehab Centre has taught them the skills they need to complete the MEGA Challenge. Finally, we see who possesses the skills to successfully complete the Final City Drive with Andrew as their passenger.

The pressure is on for our remaining drivers to prove to the experts that they have the skills to return to public roads.

The only thing they have to fear is fear itself...and each other.

The nominees for Canada's Worst Driver tackle a series of driving challenges in the hope of getting their keys back and leaving the Driver Rehabilitation Centre.

With rehab well under way, our remaining drivers being this episode with a sweet treat.

The remaining 5 most appalling drivers from past seasons of Canada's Worst Driver begin the episode by demonstrating they know where their wheels are as they attempt to complete the Trough. Then, our abysmal drivers face off in the ultimate test of car control in this season's Car Hockey Challenge. Finally, each driver attempts the Longest Reverse Challenge in the World - something you have to see to believe!

Driver training is well underway and eight of the country's most appalling drivers and their nominators begin by being paired up and tackle the Reverse Head-to-Head Challenge.

Only seven drivers remain at the Rehab Centre and our drivers begin by all boarding a school bus together as they each take turns attempting to manoeuver the giant school bus around a figure eight track.

In this episode, the six remaining drivers begin with the basics...mastering the 4 steps of a perfect lane change. Sound simple but guess what? It isn't. Then as day becomes night, it's not over for our abysmal 6 as they are dropped off in the middle of nowhere. Their mission: to find their way back to their hotel in our Night Time Navigational Challenge. Finally, our drivers learn the fastest way to turn around as they try to master the perfect Hand Brake J-Turn. One driver avoids the title and returns to public roads. Our experts continue to watch closely to determine who will be Canada's Worst Driver.

Possibly the most bizarre driving test ever conceived: the two-car teeter-totter.