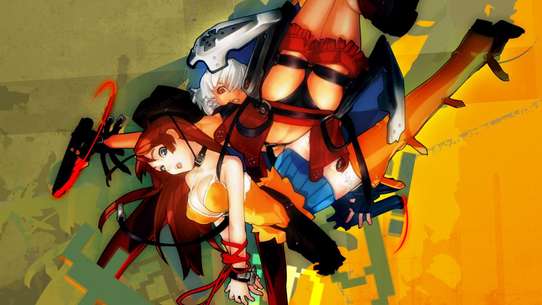 The BEST episodes of Burst Angel

Every episode of Burst Angel ever, ranked from best to worst by thousands of votes from fans of the show. The best episodes of Burst Angel!

In a crime-ridden future Japan, Kyohei Tachibana is a peaceful student at a culinary school, dreaming of going to France for advanced study as a patissier (pastry chef). To afford the trip, he accepts a part-time job as private cook to a strange group of women - Sei, Meg, Jo and Amy. To Kyohei's astonishment, they turn out to be a band of violent mercenaries, and he finds himself in the line of fire.

Takane Katsu saves Meg from the dirty cop, Iriki. Then Takane and Jo take down the cybot, extracting its brain and killing Iriki in the process.

Jo and Kyohei are on the run from Sei's underlings, as they search for the crow. Jo and Sei resolve their differences, and Jo defeats the crow using Django in time to save Kyohei.

A flashback reveals Meg and Jo's history. Meg is the leader of a group of orphans who find Jo in a river with amnesia.

Jo goes after a mysterious cybot, and meets a mute samurai. The cybot destroyed a village he was protecting, and he seeks revenge.

The cybot is piloted by Maria, a woman with special abilities like Jo. When she and Jo fight, it transports them to another reality. In this reality, the mute samurai defeats the cybot with a magic sword. Sei shows up with Django in the middle of the battle.

Kyohei runs into a friend from school, Akio. Akio has joined the yakuza and become a cyberoid. Akio's boss Eiji has turned on him, and they destroy each other.

Jo is captured, and her past is revealed. She is a bio-weapon, the same as Maria. They are the two survivors of a death match to choose the best. Maria comes on to Meg, then kidnaps her and Jo. Note: also called "The Devil You Love."

Maria takes Jo and Meg to a ship in the ocean. Jo and Maria have a duel, and Maria's desire to kill Jo abates. Jo, Meg and Maria are then attacked by RAPT cybots and Maria is seemingly killed.

Jo knocks Meg unconscious for her own safety, and Sei and Jo take down RAPT, with the help of Leo, Takane and Amy. After a long gun battle with RAPT cybots across town, Jo and Sei enter the RAPT HQ and destroy its supercomputer, along with killing the head of RAPT, which leads to the base exploding with them inside. Later on, Meg awakens on the beach and discovers what happened. The story ends with Meg replacing Jo in a scene similar to the entry credits but with a red Django. The fates of Leo, Takane, Kyouhei and Amy are left ambiguous, but it is implied they survived the final battle and fled from Tokyo.

Meg is kidnapped by a cybot, and Jo goes after her, taking Kyohei. They go into the most dangerous part of town and retrieve Meg, along with a piece of the cybot.

A RAPT police cybot attacks Takane on the freeway. Its glowing brain causes it to attack innocent people. It calls in reinforcements, but Jo and the team destroy them all.

Bailan have joined forces with RAPT. They force Sei to disband the group, then send them on one last mission to kill the mutated governor, Ishihara.

Kyohei has second thoughts about his new job. The girls go after a lunatic named Anthony Wong, and get involved in a secret experiment along with Wong's brother.

Sei agrees to a political marriage for the sake of Bailan, but the groom, Jei, doublecrosses them. Meg's flying white tiger chi is unleashed, and Jei and his men are defeated.

A giant mechanized crow abducts Meg. It is searching for a deadly nanobot virus that has been injected in Kyohei. Jo takes Kyohei at gunpoint to look for the crow.

The students at the all-girls school have been used as test subjects, turning one girl, called Nadeshiko Volban, into a monster. Jo joins the school and kills the monstrous girl.

Meg is trapped on a train with Wong and his brother, Jack Liang. Hinode Pharmaceuticals has been performing experiments on Wong, and he turns into a monster. This monster drives the train into a Hinode building, and Jo saves Meg at the last second.

In a bit of fan service, the group goes to the beach. A giant squid causes a flaming oil spill, and Jo takes it down with Django.

Jo is ordered to protect Mega Rider, a Japanese wrestler. Ultra Beast, his opponent, turns into a monster and Jo goes off to kill it.

Kyohei, a culinary student, takes a mysterious job working for four women: Sei, Meg, Amy, and Jo. They are a special taskforce, and when one of their jobs goes awry, Kyohei is kidnapped.

#22 - Mansion Where Lurks the Demon

Meg goes undercover at an all-girls school named St. Luciana Academy. She investigates an elite clique called Ishtar, and is attacked by a monster.

Takane and Leo visit the filming of a television drama, when Takane goes berserk then becomes unconscious. A glowing brain is controlling Tokyo's children, including Takane, and sends them after the group. Jo destroys the brain, and everyone returns to normal.

Someone has been posting pictures of Amy in cyberspace, so she and Kyohei go shopping for electronics. A group of "monitormen" wants her to join them in cyberspace permanently, but she defeats them.