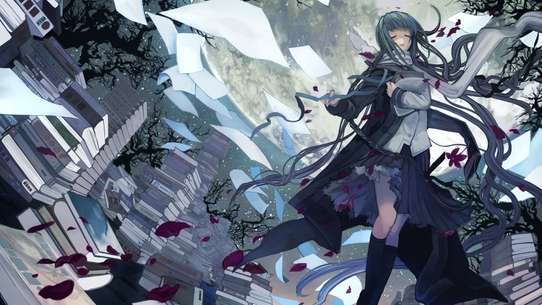 The "mysterious school comedy" centers on the unusual members of a high school literary club. Tōko Amano, a high school senior who calls herself the "literary girl" as the club president, is actually a supernatural creature (yōkai) that devours stories — she tears pages from books to munch on them. Her club subordinate is Konoha Inoue, a second-year high school boy who writes stories every day for Amano to eat. He once wrote an award-winning novel, but he wrote it under the penname Miu Inoue so readers thought the author was a mysterious 14-year-old bishōjo novelist. The stress from the novel's fame and its movie and television drama plans turned Inoue in an introverted recluse.

#1 - Prelude of the Dreaming Girl

Toko Amano is a high school student with the strange power of being able to experience books by savoring them. While visiting the workplace of her deceased father, she stumbles upon the rejected drafts for a writing contest. One of them has such an impact on her that she asks her acquaintance there to give it one more chance.

#2 - Requiem of the Sky Dancing Angel

Asakura Miu lives a sad and troublesome childhood due to her parents' constant fighting. Eventually her father leaves the house and she ends up living with her bitter mother. Miu has been desperately trying to escape the harsh reality that surrounds her to the only safe place she knows: the worlds inside the books she loves. Ostracized by the kids at school due to her imaginative mind that prompts her to frequently lie, she becomes a friend of Konoha Inoue who rather than estranged, ends up fascinated by Asakura's tales.

While waiting for Konoha, Nanase Kotobuki reflects on some events that involved him in the past. Despite telling her friends she hates him, Nanase secretly holds feelings for Konoha, and is troubled that she cannot tell him how she feels. Her friend Kurara Mori tries to help her by sticking by her and giving her advice. Mori helps her in various ways, from taking her to practice laughing in the drama club, to calming her mind in the Japanese tea ceremony club, and even placing photos of Konoha inside her lunch box and books. Mori asks Konoha to protect Nanase during swim class by shielding her from gazes from the other guys, but she gets flustered and calls him a pervert, infuriating Mori. Nanase reflects on her mistakes, and tries very hard to give Konoha some homemade cookies the next day, but she fails each time. Later, Konoha finds her in the park with a stray dog, but Nanase gets hurt when she blindly runs into a parked truck after trying to avoid him. She is taken to the hospital for some tests and Mori comes to see her, followed by Konoha, who also brought the dog along. Back in the present, Konoha finally arrives and goes to visit a shrine with Nanase.