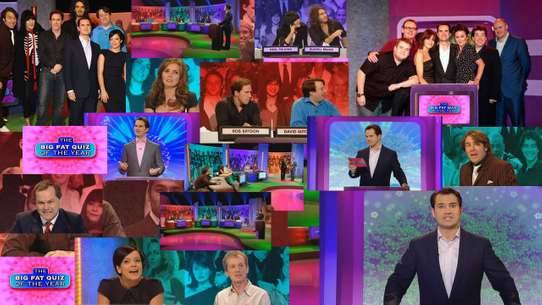 In 2006 the show was broadcast on December 27. The three teams were: Russell Brand & Noel Fielding (Originally Raven Spawn/Rod's Progeny, in reference to a Jimmy Carr joke about Fielding's supposed parentage - a raven and Rod Stewart. Later, they took on the mantle of the Goth Detectives.) Rob Brydon & David Walliams (Rob & Dave - a name that the pair claimed had been chosen after "a lot of phone calls", and the involvement of a team of hired writers) Jonathan Ross & Cat Deeley (The Conventionally Attractive Team) Guest questioners in the studio included Boy George, Myleene Klass and Matt Willis and Guy Goma (famous for incorrectly appearing as a guest on BBC News 24). Pre-recorded questions were asked by Sir Ian McKellen, Lily Allen, Carol Vorderman, Courtney Love, Girls Aloud, and Sacha Baron Cohen in his guise as Borat.

The show aired on 30 December 2007. The teams were: Russell Brand and Noel Fielding (The Goth Detectives) Rob Brydon and David Mitchell (The Shadow Cabinet) Jonathan Ross and Lily Allen (Fulham) Guest questioners in the studio were Christopher Biggins and Cerys Matthews. Pre-recorded questions were asked by Take That, Gordon Ramsay, Thom Yorke and Jon Snow. John Hurt read out extracts of the year's best selling autobiographies.

Jimmy Carr puts a panel of A-List celebrity teams to the test. This year's teams are Jack Whitehall with Jonathan Ross, Dara O Briain with Kristen Schaal, and Noel Fielding with Richard Ayoade.

Who stole the show at the Royal Wedding? What does Danny Dyer think about David Cameron? What is Kanye West's passcode? All of these questions and more will be answered on 2018's biggest, fattest, and most thoroughly GDPR-compliant quiz. Question master Jimmy Carr is joined by quizzers Richard Ayoade, Noel Fielding, Mo Gilligan, David Mitchell, Claudia Winkleman and Michelle Wolf as they battle it out to see who can remember most about the last 12 months. As always, he'll be helped by Jon Snow, Charles Dance and a whole host of celebrity question-setters to recall the year's biggest events and truly separate the Yannys from the Laurels.

The annual year-end quiz, hosted by Jimmy Carr. Guests including Sarah Millican, James Acaster, Jonathan Ross and Judi Love look back on the strange events of 2021, from space travel and celebrities who do not shower, to sea shanties and Tony Blair's peculiar hair. Charles Dance and the children of Mitchell Brook Primary School are on hand to help Jimmy pose his questions.

Jimmy Carr quizzes James Acaster, Stacey Solomon, David Mitchell, Maya Jama, Richard Ayoade and Joe Lycett on the hot topics of the past 12 months, from Harry and Meghan to Kim and Kanye.

2017 is almost over, so what better way to make sense of the past 12 months than via the Big Fat Quiz of the Year? What calamities befell Theresa May during her conference speech? Who were Taylor Swift's unlikely musical collaborators? And how did Brenda speak for the whole nation? Quizmaster Jimmy Carr tests a panel of A-list celebrities including Richard Ayoade, Noel Fielding, David Mitchell, Big Narstie, Katherine Ryan and Roisin Conaty to see how closely they've been paying attention to the last year. A host of celebrity question setters, including Charles Dance and Jon Snow, also help to test the nation on 2017's most memorable moments. So sit back, pour yourself a nice hot mug of covfefe, and say farewell to another memorable year with the ultimate pub quiz.

Looking back on the year 2015, with host Jimmy Carr and teams consisting of Rob Brydon and Jo Brand, Richard Ayoade and Greg Davies and lastly Claudia Winkleman and David Mitchell. As always, this year features guest questions, staring Quentin Tarantino, Rita Ora, Simon Pegg, and others. Of course, there's a Mystery Guest, an act-out by the children of the Mitchell Brook Primary School and lots and lots of humour. 90 minutes of pure enjoyment whilst looking back over the somewhat terroristy 2015.

Jimmy Carr puts another panel of celebrities to the test as they battle it out to see who remembers most about 2012. What did Prince Harry get up to in Vegas? Why were we all talking about pasties and sausage rolls? And how did Usain Bolt celebrate his amazing 200m win at the Olympics? If you know the answer to all, some or even none of the above, then join us as a host of big names, including Jonathan Ross, Russell Howard, Jack Whitehall and James Corden, vie for the coveted Big Fat Quiz crown. As usual, Jimmy will be calling on some seriously A-list question-setters, with Seth Rogen, Jack Black, Ricky Gervais, Will Ferrell, Quentin Tarantino and Sacha Baron Cohen all turning up to lend a helping hand in previous years. Play along at home or just sit back and let the celebs do all the hard work, but don't miss The Big Fat Quiz of the Year and Jimmy Carr's annoying laugh throughout the entire show which attracted numerous complaints to Channel 4.

Jimmy Carr puts a panel of celebrities including Jonathan Ross, Ruth Jones, Alan Carr, Noel Fielding, Michael McIntyre and Richard Ayoade to the test as they battle it out to see who remembers most about the events of 2010. Can you remember the name of instrument that was the scourge of the South African World Cup? Which unsuspecting character did Gordon Brown brand as 'ignorant' during the general election? What did 50-year-old spinster Mary Bale throw away to become Britain's most hated woman? If you know the answer to all, some, or even none, of the above then join Jimmy as he challenges a host of famous faces to win the coveted Big Fat Quiz crown.

Why was Christian Bale so angry in January? What made NASA so happy in December? And which scandal prompted President Obama to call Kanye West a "jackass" in September? The biggest, fattest and funniest quiz of the year returns with a stellar line-up including David Mitchell, Charlie Brooker, Claudia Winkleman, Rob Brydon, Russell Brand and Jonathan Ross. Jimmy Carr does the quizzing, Peter Andre drops in for a surprise visit and as usual there's a glittering host of A-listers popping up to ask questions about the year's events.

The host, Jimmy Carr, read out questions relating to events of 2004 to three teams of celebrities: Simon Pegg & Liza Tarbuck, David Walliams & Rob Brydon, June Sarpong & Jonathan Ross. Louis Walsh, Nadia Almada and Kelly Holmes all made live appearances to read out the questions for the months of April, June, and August respectively. Recorded questions from Bono and The Bear from Bo' Selecta were shown too along with films of Richard and Judy discussing events.