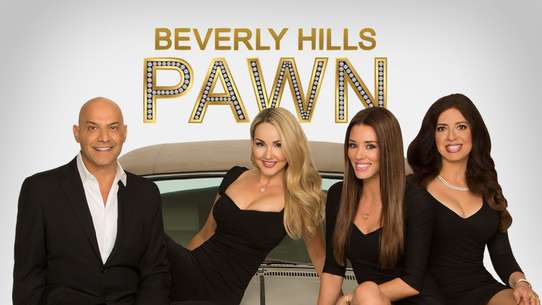 A new half-hour docu-series exploring Yossi Dina and his extraordinary pawn shop in the heart of world famous Beverly Hills. The master businessman and former army captain runs his luxury shop with an iron fist, and is known for his cutthroat negotiating and his superior taste. When Hollywood’s downtrodden and desperate elite fall on hard times, they know exactly where to go to find a lot of cash...fast. Yossi grants multi-million dollar loans at a moments notice for masterpieces, gems, antiques, and priceless Hollywood treasures only attainable by the rich and famous. Each episode follows Yossi and his loyal team as they dole out massive loans to the wealthy for their incredible collectibles.

Yossi and Cory consider buying blueprints of the Starship Enterprise from the TV series "Star Trek: The Next Generation"; Yossi and Aria look at an antique Winchester rifle; and Yossi and Dominique hope to sell a diamond-and-gold bracelet.

A couple brings a special artifact to the shop to show Yossi; Dominique and Yossi meet with S.J. Mendelson, a fine brooch collector; Yossi is visited by his very reliable client, Elliot, who presents him with amazing memorabilia.

Yossi and Cory have a chance to buy a prop from an Eddie Murphy movie; Yossi and Aria consider a sculpture of the late Amy Winehouse; Yossi and Dominique hope to sell a pair of Victorian-era diamond earrings.

#4 - The Beatles, The King and Doggie Bling

Yossi and Aria get to meet Neil Armstrong's son.

Zorro's sword; Michael Jackson's threads; Yossi and Cory seek a gift for a beekeeper; a rare item once owned by Frank Sinatra.

Drawings by Muhammad Ali; a $1 million watch; and Barbara Streisand's showgirl dress are the hot topics at the Dina Collection.

Some worship-worthy movie memorabilia; one-of-a-kind earbud covers; and a very sensuous piece of art are the subjects of the Dina Collection.

#10 - Jason And Marilyn And Yossi And Alice

Yossi and Dominique look to sell an Andre Agassi-autographed tennis racquet; Yossi and Aria search for the perfect jewelry accessory for a celebrity dog; and finally, Yossi and Cory hope to purchase a 1965 Alfa Romeo automobile.

Rocky's robe, gloves and trunks; a dress from "A Place in the Sun."

A drawing by Bruce Lee; jewelry from a Monte Carlo gambler; and a prop from a new, science-fiction sensation keep the Dina Collection busy.

The featured items include a famous weapon from a popular James Bond movie, a good record from the disco era, an item worn by legendary actress Liz Taylor in "Cleopatra" and another potentially lucrative item from the "Iron Man" film.

#15 - Thunderbirds Pink Diamonds And All That Jazz

Yossi and Aria try selling an original artwork by Miles Davis; Yossi and Dominique show a $300,000 diamond ring to an expectant father; Yossi and Cory consider buying a 1963 Ford Thunderbird.

An eccentric woman with an interest in the occult tries to offload a selection of antique jewelry; Yossi tries to bargain with his ex over a diamond bracelet; a treasure from the set of 'Jurassic Park'; an old rocking chair.

Aria gets a new view on Vegas life when she models some Swarovsky Showgirl jewelry; Yossi and Cory visit a friend's mansion for a secret item from make-up artist John Chambers.

Today the action at Beverly Hills Pawn is out of this world. A Star Trek treasure sends Yossi and his team into uncharted territory, with big bucks at stake for a one-of-a-kind piece of Captain Kirk's wardrobe. In the back office, Cory pushes her boss to boldly go where he has never been before -- behind a computer to send his own e mail for the very first time. A vintage purse made of pure gold lures a real princess into the store, and the team takes a trip to an historic hilltop home to bid on a piano that once belonged to a King -- none other than Elvis Presley. Later, Yossi shows his soft side when the partner of a famous producer brings in a treasured Victorian necklace to raise money for charity, and living legend Larry King drops by looking for an extra-special anniversary gift. It's just another 'average' day, at the most exclusive pawn shop on the planet.

A piece from 'The Big Lebowski'; a customer looks to purchase a mangalore head from 'The Fifth Element'; Yossi and Cori make a trip to their client's home to see a Degas piece; a prop from 'Beautiful Creatures.'

#20 - Hitchcock and the Moonwalk

Michael Jackson's sunglasses; a costume from "Planet of the Apes"; a shrunken head from a Hitchcock film. Also: Cory learns to moonwalk.

A hairdresser from a trendy salon shops for a new blade - a shiny stunt sword from 'The Hunger Games'; Aria deals with a walk-in customer wielding a guitar signed by Jimi Hendrix, then calls in the experts for a second opinion.

A valuable Stan Winston movie artifact is brought to Yossi; Dominique and Yossi visit producer Kevin Strong to show him a special watch; a couple wants to purchase a unique wedding gift.

Memorabilia from 'Batman Forever' and 'Batman and Robin'; an original jacket worn by Keanu Reeves in 'The Matrix: Revolutions'; a piece of interesting jewelry.

The objects brought in this episode range from a piece of Michael Jackson's wardrobe, to a truck once owned by Steve McQueen, a piece that belonged to Liz Taylor, Jamie Walters guitar and a jacket once worn by Barbra Streisand.

Movie memorabilia from a sci-fi classic; a stylist hopes to sell free jewels she received at a charity event; an antique statuette from the Academy Awards; a musical instrument that was once owned by Whitney Houston; Ryan O'Neal shops for a watch.