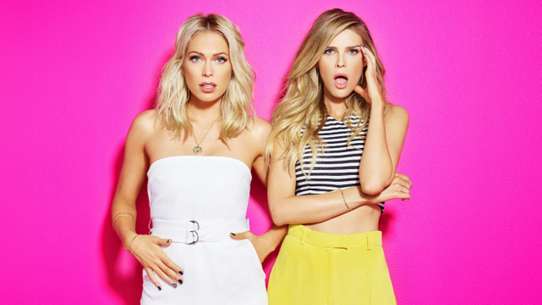 The BEST episodes of Barely Famous

VH1's series "Barely Famous" features sisters Erin and Sara Foster (multi-hyphenate producers, actresses and writers and daughters of Grammy Award-winning producer David Foster) offering a tongue-in-cheek perspective on reality TV and life in the Hollywood fast lane. In "Barely Famous," Erin and Sara portray sisters who navigate the treacherous LA waters of career and dating, all while trying to maintain their picture perfect image. The series highlights the most obvious and outlandish conventions of reality TV by centering around two sisters who say they would never do a reality show, but are being filmed by a camera crew. The sisters are followed through their awkward celebrity encounters and efforts to book their next big gig and when things go horribly wrong - as they tend to do - the ladies prove that living the Hollywood lifestyle isn't easy, even if you're born into it.

In an attempt to look less shallow, Erin dates a guy in a wheelchair; and Sara tries to make a red carpet fashion statement.

Erin's new relationship with actor Zach Braff is jeopardized when she discovers that she's pregnant. Meanwhile, Sara attempts to become a member of Ali Larter's squad.

Erin goes on a journey in Los Angeles to meet up with a booty call.

Sara tries to impress the admissions dean at the prestigious preschool she's picked out for her daughter. In other events, Erin lands an important interview; and leaves her favorite socks at the producer's house.

#8 - Death of a Relationship

Sara learns of an infidelity involving her husband and the nanny, and she wants to take advantage of the situation; Erin dates a man of advanced age.

In the second-season premiere, Erin scores an interview with Jessica Alba and hopes to be hired for a writing job. Meanwhile, Sara uses her recent fame to launch a celebrity-lifestyle brand.

The sisters are interrogated by the police, and piece together their wild day from the show's footage.

Sara and her co-star Kate Upton start hanging out and doing everything together, while Erin follows her new boyfriend onto another reality show – the highly rated dating show Prince Charming.

Erin and Sara are sent to shoot a vacation episode of the show at Universal Orlando Resort, where old family grievances are aired.