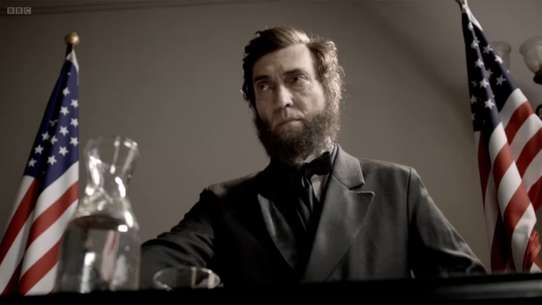 The BEST episodes of Andrew Marr's History of the World

Andrew Marr sets off on an epic journey through the explosive events, changes, conflicts and triumphs that shaped 70,000 years of human history. From our earliest beginnings in Africa, Marr traces the story of our nomadic ancestors as they spread out around the world and settled down to become the first farmers and townspeople. With spectacular images, compelling characters and incisive narration, this is an epic journey through human history and the story of the world we live in today, featuring dramatic reconstruction, documentary filming around the world and cutting-edge computer graphics.

In the final episode of this landmark series charting the history of human civilisation, Andrew Marr brings the story right up to date with the twentieth century. Marr suggests that humanity found itself propelled forward by our technological brilliance but limited by the consequences of our political idiocy. Democracy confronted communism and fascism, and two world wars would underscore our political failures more than ever before. But our achievements were also astonishing, especially in the fields of science and technology. We invented machines of awesome speed and power, and reached beyond the limits of our planet. Now, more of us live longer, healthier and wealthier lives than our ancestors could ever have imagined. But Marr argues that with seven billion of us on the planet, and rising fast, either we manage the earth's natural resources better or we risk global catastrophe. The decisions we make in the next 50 years, he argues, may well decide our fate. For Marr, the most interesting part of human history lies just ahead.

In the seventh episode of this landmark series charting the story of human civilisation, Andrew Marr tells how Britain's Industrial Revolution created the modern world. The old agricultural order of aristocratic landowners, serfs and peasant farmers was replaced by a new world of machines, cities and industrialists. Across the world, many resisted this sweeping change. From China to America, Russia to Japan, bitter battles were fought between the modernisers and those who rejected the new way of life. In Europe, new industrial powers competed with each other to create vast empires which dominated the world. But this intense competition would lead to the industrial-scale slaughter and destruction of the First World War.

In the fifth episode of this landmark series charting the story of human civilisation, Andrew Marr tells the story of Europe's rise from piracy to private enterprise. The explosion of global capitalism began with Christopher Columbus stumbling across America while searching for China. While Europe tore itself apart in religious wars after the Reformation, the Spanish colonised the New World and brought back 10 trillion dollars' worth of gold and silver. But it was Dutch and English buccaneer businessmen who invented the real money-maker: limited companies and the stock exchange. They battled hand-to-hand to control the world's sea trade in spices, furs and luxuries like tulips. In the 145 years from 1492 to 1637, European capitalism was born and spread across the globe.

In the fourth episode of this landmark series charting the story of human civilisation, Andrew Marr reaches the Middle Ages. After the collapse of the Roman Empire, Europe was little more than a muddy backwater. Vikings explored and pillaged from Northern Europe to North America. But they also laid the foundations of powerful new trading states - including Russia. This was also the Golden Age of Islam. And the knowledge of ancient civilisations from India, Persia and Greece were built upon by Islamic scholars in Baghdad's House of Wisdom. By exploring the conquests of Ghengis Khan, the adventures of Marco Polo and the extraordinary story of an African King - the wealthiest who ever lived - Marr finds out how Europe emerged from the so-called 'Dark Ages' and used influences from around the world to rise again with the Renaissance.

In the sixth episode of this landmark series charting the story of human civilisation, Andrew Marr explores the Age of Revolution. In the 17th and 18th centuries, people across the world rose up in the name of freedom and equality against the power of the church and monarchy. In America, people fought a war to be free from British rule. In France, bloody revolution saw the king and aristocracy deposed. And in Haiti, the slaves revolted against their masters. The world was also gripped by a scientific revolution, sweeping away old dogmas and superstition. Galileo revolutionized the way we saw humanity's place in the universe, while Edward Jenner used science to help save the lives of millions.

In this episode, Andrew Marr tells the story of the first empires which laid the foundations for the modern world. From the Assyrians to Alexander the Great, conquerors rampaged across the Middle East and vicious wars were fought all the way from China to the Mediterranean. But this time of chaos and destruction also brought enormous progress and inspired human development. In the Middle East, the Phoenicians invented the alphabet, and one of the most powerful ideas in world history emerged: the belief in just one God. In India, the Buddha offered a radical alternative to empire building - a way of living that had no place for violence or hierarchy and was open to everyone. Great thinkers from Socrates to Confucius proposed new ideas about how to rule more wisely and live in a better society. And in Greece, democracy was born - the greatest political experiment of all. But within just a few years, its future would be under threat from invasion by an empire in the east.

In the third episode of this landmark series charting the story of human civilisation, Andrew Marr plunges into the spiritual revolutions that shook the world between 300 BC and 700 AD. This was an age that saw the bloody prince Ashoka turn to Buddhism in India; the ill-fated union of Julius Caesar and Egypt's Cleopatra; the unstoppable rise of Christianity across the Roman Empire and the dramatic spread of Islam from Spain to Central Asia. Each dramatic story pits the might of kings and rulers against the power of faith. But Andrew Marr discovers that the most potent human force on the planet came from the combination of faith and military power. Both Christianity and Islam created new empires of 'the word and the sword'.

Andrew Marr sets off on an epic journey through 70,000 years of human history. Using dramatic reconstructions, documentary filming around the world and cutting-edge computer graphics, he reveals the decisive moments that shaped the world we live in today, telling stories we thought we knew and others we were never told. Starting with our earliest beginnings in Africa, Marr traces the story of our nomadic ancestors as they spread out around the world and settled down to become the first farmers and townspeople. He uncovers extraordinary hand-prints left in European caves nearly 30,000 years ago and shows how human ingenuity led to inventions which are still with us today. He also discovers how the first civilisations were driven to extremes to try to overcome the forces of nature, adapting and surviving against the odds, and reveals how everyday life in ancient Egypt had more in common with today's soap operas than might be imagined.