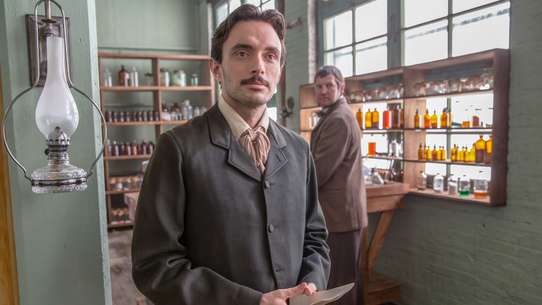 The BEST episodes of American Genius

History's greatest minds have always known that to change the world, you have to take out the competition. American Genius chronicles the competitions in innovation that pitted history’s brightest minds against each other in the race to lay claim to the future. From Steve Jobs vs. Bill Gates to the Wright Brothers vs. Glen Curtiss, each episode of the show focuses on a specific rivalry, delving into the fierce power struggles, deceit, fluke timing, and raw ambition out of which innovation was born. Iconic masterminds pushed themselves to the limits of human genius, overcoming equally brilliant and ruthless competitors to turn history’s greatest ideas into reality.

The invention of the television was born out of a gritty competition between David Sarnoff and Philo Farnsworth, who both laid stake to a precious claim. Delve into the David vs. Goliath story that led to a media revolution. After sketching his idea for an “electric television” for his high school science teacher, Philo Farnsworth dedicates his life to gaining the knowledge necessary to make his dream a reality. But when RCA tries to buy his patent (and the riches that come with it), Farnsworth and RCA founder David Sarnoff face off; the results of their confrontation will forever change the way we experience the world. Expert interviews include entrepreneur will.i.am, politician and businessman Mitt Romney, and others.

Delve into a battle of wills between two brilliant minds: Eccentric genius Nikola Tesla enters a rivalry with Thomas Edison that will forever change the world. Edison is one of the world’s most prolific and well-known inventors, developing the phonograph, the motion picture camera and the commercially viable electric lightbulb. With backing from some of the world’s wealthiest financiers, he sets out to one-up his invention by building an electric empire, using the power of direct current. But when his former assistant Tesla advocates for the use of a different kind of electric current, the two inventors go to war to determine who will power the world’s future. Experts and authors, including famed theoretical physicist Michio Kaku, offer insight into the inventors’ dramatic struggle.

In the 1980s, two of America’s most brilliant minds, Bill Gates and Steve Jobs, battle to dominate a new age and, in the process, revolutionize billions of lives. Up until this time, most computers were behemoth machines that sat in research labs and university tech centers, largely inaccessible to the public — but not for long. Relive Gates and Jobs’ heated battle to bring the personal computer to the masses. Apple co-founder Steve Wozniak, entrepreneur and Twitter co-founder Biz Stone, politician and businessman Mitt Romney, and others weigh in on the innovation race that forever changed technology and put Microsoft and Apple on the map.

The race for flight is chronicled as aviation pioneers Orville and Wilbur Wright face off against Glenn Curtiss in a bitter rivalry that puts lives at risk. After developing the airplane, the Wright brothers keep the technical details under wraps for years, out of fear of losing control of their invention. Meanwhile, Curtiss boldly goes public with his airplanes and innovations and quickly becomes a popular face of flight. The Wright brothers, now patent holders in control of all powered flight, counter with lawsuits; as they hold fast, they stifle innovation in the very industry they’ve launched. Go inside the rivalry so heated that, when Wilbur dies, Orville blames Curtiss for driving him to exhaustion. Scientist Bill Nye, famed theoretical physicist Michio Kaku and others offer insight into the epic showdown that laid the groundwork for modern aviation.

America and the Soviet Union, deadlocked in the Cold War, set their sights on the final frontier — space. Go inside the more than decadelong struggle between the two superpowers as they both set out to conquer the moon. German scientist Werner Von Braun leads the charge for the U.S. and Sergei Korolev for the Soviets, but in the race to space, only one side can get there first. Along the way, the cutthroat competition results in unparalleled technological advancements and spawns previously unimaginable feats of engineering — as the whole world watches. Famed theoretical physicist Michio Kaku, authors, and other space and engineering experts weigh in on the battle that inspired a nation and sent man where no one had ever gone before.

Travel to the front lines of an epic battlefield: Werner Heisenberg and Robert Oppenheimer face off in a heated contest as they strive to unleash the destructive power of the atomic bomb. The two brilliant scientists toil through World War II with a single directive — harness the laws of physics to create the most powerful weapon the world has ever seen. Oppenheimer gathers the United States’ top minds as he embarks on the Manhattan Project, while Heisenberg toils away with Nazi Germany’s leading scientists. The nuclear age is in full swing as the dueling scientists scramble to build a bomb that could have detrimental effects on civilization. Famed theoretical physicist Michio Kaku and others share their perspective on the race for global domination.

Go inside the first true “arms race” as the invention of the perfect revolver pits Samuel Colt and Daniel Wesson in a race for patents that will forever revolutionize the firearm industry. In 1836, Samuel Colt changes the way wars are fought with his patent for the revolver, and profits enormously. But when Colt fires his assistant Rollin White for suggesting an improvement on his design, White takes his innovative idea to Smith & Wesson. As the Civil War breaks out, the need for firearms explodes, and only one supplier will come out unscathed. Politician and businessman Mitt Romney and Twitter co-founder Biz Stone join historians and other experts as American Genius delves into the dramatic story behind the weapon that transformed America and forever changed how wars are fought.

The newspaper redefined the way America tells its stories, but its rise to prominence was born out of a bitter rivalry between a man who built himself up from nothing and the wealthy son of a business tycoon. Follow William Hearst and Joseph Pulitzer as they push the limits of journalism in unthinkable ways, forever changing the media landscape. Flashy headlines and sensationalized stories are born out of the war for circulation. But when the Newsies strike, the media giants’ papers come to a halt and the men must learn to compromise in order to keep their empires afloat. Jack Welch, former chairman and CEO of General Electric; famed theoretical physicist Michio Kaku; and others share their perspective on the rivalry that propelled mainstream media as we know it today.