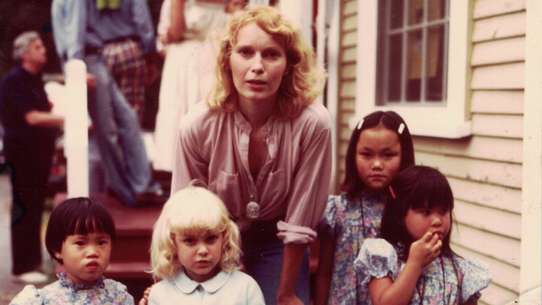 Explore the scandals behind the relationship including the accusation of sexual abuse against Woody Allen involving Dylan, his then seven-year-old daughter with Mia Farrow; their subsequent custody trial, the revelation of Allen’s relationship with Farrow’s daughter, Soon-Yi; and the controversial aftermath in the years that followed.

Mia Farrow recounts her storied relationship with Woody Allen, once a beloved father figure to her seven children. While their adopted daughter Dylan chronicles a childhood idyllic in many ways, she also speaks to the escalating discomfort she felt under the intensity of Woody's attention, which was a growing concern for Mia and her inner circle.

As Farrow and Allen ascend the ranks as a Hollywood power couple, their close-knit family is torn apart by a startling revelation about Woody's relationship with Mia's daughter Soon-Yi. Dylan details the abuse allegations that ignited decades of backlash and changed her life forever. The broader context of Allen's body of work is explored.