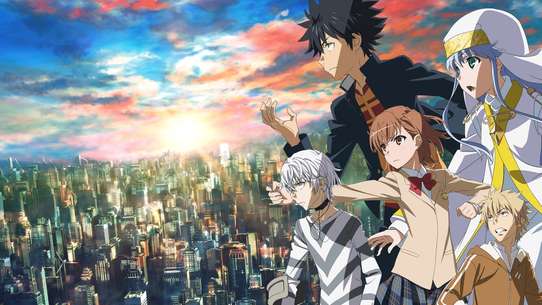 The WORST episodes of A Certain Magical Index

Set in Academy City, a city of scientifically advanced superhuman students, located to the west of Tokyo, in a world where magic is also real. Kamijou Touma's right hand, the Imagine Breaker, can negate all magic, psychic, or divine powers, but not his own bad luck. One day he finds a young girl, Index, hanging on his balcony railing. She turns out to be a nun from the Church of England, and her mind has been implanted with the Index Librorum Prohibitorum — all the magical texts the Church has removed from circulation. His encounter leads him to meet others from the secret world of science and magic and right into an adventure where science and magic collide.

Kazakiri advises Accelerator about the song Index once sang to treat Last Order. Hamazura has a surprise encounter. Lessar offers a proposition to Sasha. The long-awaited showdown between Kamijo and Fiamma takes a drastic turn.

Accelerator continues on his way to the satellite control center, but is blocked by Saraku, a MEMBER agent. The BLOCK team, with the help of 5000 hired mercenaries, attempts to break into a heavily-fortified municipal facility.

Kanzaki battles Acqua under Academy City, but finds herself overpowered by his might. Mikoto runs into Kamijo after he sneaks out of his hospital room. Kanzaki works with the Amakusa Church members to find a way to beat Acqua.

Hamazura must defend the members of ITEM against a new threat from Academy City. Accelerator acquires the final piece of the puzzle to a cure for Last Order. The showdown between Fiamma and Kamijo becomes even more intense.

Kamijo is separated from Tsuchimikado, but ends up finding the Amakusa Church's Itsuwa. She informs Kamijo about the circumstances of the Papal Palace of Avignon, and its link to the turmoil being incited around the world.

Acqua and Knight Leader continue their fateful showdown in the forest. Princess Carissa reveals a devastating new technique using Curtana Original. When Kamijo and Index's lives are endangered, an unexpected ally comes to their rescue.

Accelerator and the other members of GROUP are assigned to eliminate the members of Spark Signal, a terrorist group which has taken hostages. Hamazura and Kinuhata find themselves on the run when they defy the city's higher-ups.

A threat from Acqua against Kamijo leads Itsuwa to come to Academy City as his live-in bodyguard. Index, Kamijo and Itsuwa visit a spa in the third level of the complex beneath the 22nd School District. Mikoto frets over Kamijo's amnesia.

Kamijo runs into Sasha Kruezhev, and he continues to formulate a plan to stop Fiamma. Hamazura and Takitsubo discover an imminent threat to Digurv's village. The archangel Gabriel rains havoc upon the Russian and Academy City forces.

As Kamijo and Sasha look on, Hyoka rushes in to stop the archangel's rampage. Accelerator joins the battle as well, with a newfound purpose. Acqua has his own strategy to weaken the archangel's power, though at great cost to himself.

After being escorted to London, Kamijo and Index have an audience with the queen and three princesses to discuss the threats facing Britain. Upon dividing into separate teams, Kamijo assists with tracking down the members of New Light.

Itsuwa and Kanzaki both up the ante in their pursuit of Kamijo. Index and Kamijo are summoned to Britain to deal with a magic issue, but while en route, their jet falls victim to a terrorist plot that threatens the lives of everyone aboard.

Accelerator begins finding clues about the parchment he is carrying. Hamazura and Digurv find an unexpected ally in Acqua. Takitsubo receives some welcome news from Elizalina. Kamijo and Lessar attempt to infiltrate Fiamma's base.

Hamazura desperately tries to rescue Takitsubo when the building she is in falls under terrorist attack. Stephanie hunts down Kinuhata to exact revenge for Sunazara. Accelerator seeks out assistance from an unlikely benefactor.

Kamijo begins second-guessing himself after Fiamma's rebuke. Hamazura fights to protect the village from privateers. The fighting between Britain and France ramps up. Accelerator lashes out at Kamijo over Last Order's condition.

Tsuchimikado apprehends an underworld arms broker, and a search of his apartment leads to information about an assassination plot. But there is more to the scheme than it originally appears, as several other teams go into action.

As the coup continues, even the sisters of the puritan church are targeted, while the queen and princesses find their lives in danger. Index analyzes the evidence of the Eurotunnel blast. Knight Leader is confronted by a former colleague.

Kamijo, Kanzaki, Index, and Vilian head toward Buckingham Palace to stop Carissa. The palace is bombarded from the floating fortress Coven Compass, and others join the battle when Carissa calls in her own cruise missile strike.

Confronted by Terra, Kamijo and Itsuwa have their hands full trying to avoid his attacks. Military forces from Academy City appear in Avignon, suppressing the demonstrators. Terra uncovers the secret Kamijo has been hiding.

#20 - The Alliance of Independent Nations

Tensions escalate as Russia threatens military action against Academy City, while French sorcerers storm the English Channel. Kamijo and Lessar's search for Sasha Kruezhev leads them to the Elizalina Alliance of Independent Nations.

While Hamazura is out running errands for Mugino, SCHOOL stages an attack on ITEM. When Mugino runs from Kakine, Takitsubo offers to protect Hamazura, but ends up needing his help instead. Kakine issues a challenge to Accelerator.

Following the September 30th Kazakiri incident, protests against Academy City erupt across Europe, and things are restless within the city, as well. Kamijo must stay after school as punishment after getting into a fight with his classmates.

Técpatl and Unabara square off in Shiokishi's chambers, while Accelerator and Sugitani face each other in the hallway outside. Kinuhata discovers the true reason for the current assault against herself, Takitsubo, and Hamazura.

With Kamijo unconscious, Itsuwa is guilt-ridden, and receives a pep talk from Tatemiya. As Orsola researches Acqua's past, the Amakusa Church members make their stand against Acqua, at which Itsuwa reveals their new secret weapon.

An overjoyed Accelerator gains a new perspective on the world. The duel between Kamijo and Fiamma concludes, and the doomed Star of B'Tselem begins its crash landing. The ITEM members are tracked down by an old acquaintance.