The BEST WGN America shows of all time

We've compiled the average episode rating for every WGN America show to compile this list of best shows! A struggle for power and control set in the rugged and mysterious hills of Appalachia, "Outsiders" tells the story of the Farrell clan, a family of outsiders who've been in these parts since before anyone can remember. Living off the grid and above the law on their mountaintop homestead, they'll protect their world and defend their way of life using any means necessary. 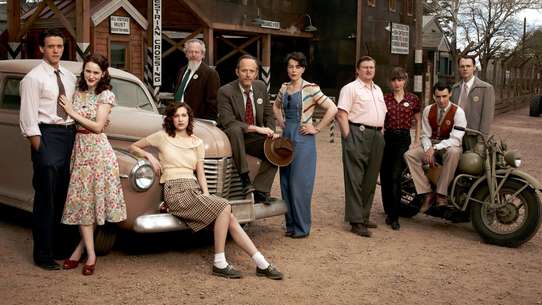 Set against the backdrop of the greatest race against time in the history of science — the mission to build the world’s first atomic bomb — follows the brilliant but flawed scientists and their families in Los Alamos as they attempt to coexist in a world where secrets and lies infiltrate every aspect of their lives. Set in the volatile world of 17th century Massachusetts, it explores what really fueled the town’s infamous witch trials and centers on Mary Sibley, the beautiful, ruthless but vulnerable wife of an ancient, ailing but very wealthy Salem town Selectman. Underground centers on a group of slaves planning a daring 600-mile escape from a Georgia plantation. Along the way, they are aided by a secret abolitionist couple running a station on the Underground Railroad as they attempt to evade the people charged with bringing them back, dead or alive. A former DEA agent forced into early retirement runs a gift shop in in the Philippines. Noah Funk, a newly-elected Mennonite pastor, is determined to rid his community of drug traffickers by betraying a fellow Mennonite to the police. But instead of solving the problem, Noah's actions trigger an ultimatum from mob leader Eli Voss: in order to protect his family, he must get involved in the illegal operation. Noah decides that if he must work for the mob, he will secretly gather enough evidence to dismantle the organization...